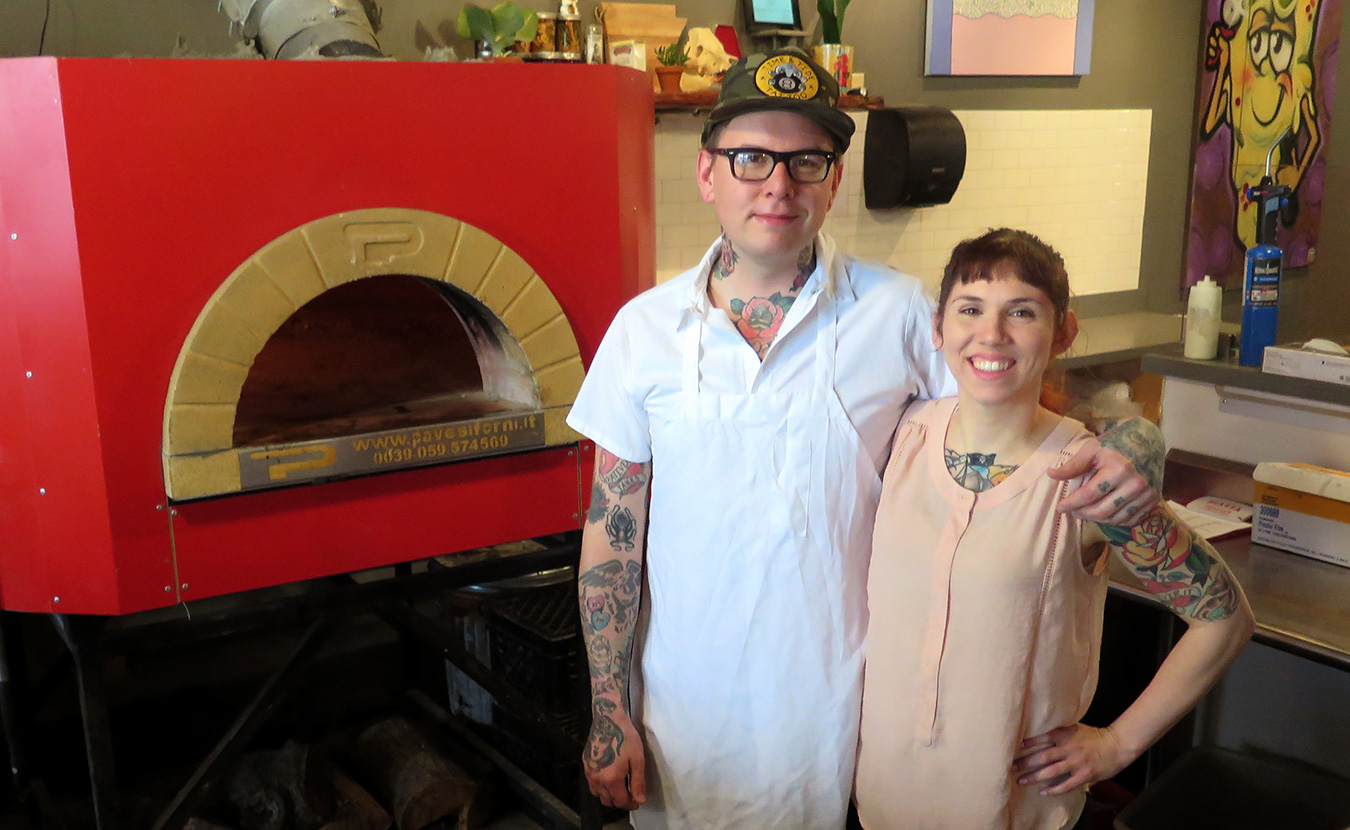 Adam (left) and Alicia Sweet, owners of King Dough pizza, stand next to their Italian brick oven in their brick-and-mortar location on the downtown Square. | Photo by Lynae Sowinski

You’ve probably heard the classic advice: Never mix business with pleasure. So why is it that an upsweep of business owners, particularly in Bloomington, are taking the reins on their passions and turning them into businesses? Alicia and Adam Sweet, owners of King Dough pizza are guilty of bypassing many traditional business guidelines but have quickly found success in their restaurant on the downtown Square. Their focus is not only on creating wood-fired pizzas (a food they absolutely cannot get enough of) but also on working with friends and making connections with similar-minded business owners — the Sweets work with people they like. “If we don’t like you, we aren’t going to collaborate with you,” Adam Sweet says.

The couple has worked hard to create a trendy space using statement pieces from local businesses. Along the walls are shelves built by local design and fabrication studio Clutch Fabrication — filled with firewood ready to fuel the Italian brick oven. As you head toward the back of the space, you find a long wooden bar, reclaimed from the prior restaurant, Max’s Place. Harvest Moon Flower Farm provides the fresh flowers decorating their tables.

King Dough also collaborates with other local businesses through their menu. Among the variety of local beer on tap from places like Bloomington Brewing Company and Upland Brewing Company is an option for cold brew Hopscotch Coffee. (In fact, Jane Kupersmith, the co-owner of Hopscotch Coffee, helped the Sweets land their space on the Square.) King Dough’s King Cardinal Tiramisu features Cardinal Spirits’ Songbird Coffee Liqueur, and many ingredients in their pizzas and salads come from local farms, such as Mavourneen Farm and Bread & Roses Nursery. The pizzeria’s modus operandi is not about separating business from pleasure and friends from employees. The Sweets have collaborated with as many businesses as they have been able, and plan to continue doing so. They don’t care about being everyone’s favorite pizza place in town so much as making Bloomington “cooler.” Adam Sweet says, “If you love Aver’s Pizza, then that’s great, eat at Aver’s.” King Dough is purposefully incorporating their favorite things with their favorite people into their business model, such as helping nonprofits like Mother Hubbard’s Cupboard. And they’re not the only ones in Bloomington ignoring many traditional business practices.

Walk, bike, or run along the section of the B-Line Trail between West Patterson Drive and West Dodds Street and there’s a solid chance you will spy a Cardinal Spirits employee lugging carafes of hot brew from Hopscotch to the distillery. Not only are the employees of Cardinal staying charged through their shifts with Hopscotch’s coffee blends, but the distillery has incorporated Hopscotch beans into their Songbird Coffee Liqueur and into a few drink recipes on their menu.

In the words of Hopscotch’s Jane Kupersmith, some of the newer places around town make up a “bootstraps community, an entrepreneurial world of intensely creative, laid-back people.” She said it best when she vocalized her feelings about the local connections she has experienced since she started working on opening Hopscotch Coffee two years ago. She has “found a camaraderie and a distinct drive toward the same direction” in their business models.

Organic business-to-business relationships fueled the creation of the café, which has a similar business model and philosophy to King Dough’s and Cardinal Spirits’. Many of Kupersmith’s previous local connections contributed to align the pieces of what has become one of Bloomington’s fastest growing coffee shops. She tries to help other businesses in their early stages and has received the same kindness from others, like Bea’s Soda Bar and Cardinal Spirits, while getting Hopscotch up, running, and (recently) expanded. Jane Kupersmith, co-owner of Hopscotch Coffee, sits on the coffee shop’s porch, which faces the B-Line Trail. Just down the B-Line is Cardinal Spirits, viewed on the right with its red umbrellas. | Photo by Jonna Mary Yost

Because these businesses are often focused on making Bloomington “cooler,” they frequently help other businesses when the opportunity presents itself. Kupersmith recently discovered the Bloomingfoods Elm Heights coffee bar was shutting down, and she took a chance. She offered not only to supply the location with Hopscotch coffee but also to train Bloomingfoods’ staff in the realm of espresso tips and tricks. Expanding without the promise of a profit is not your typical business move, but Kupersmith simply didn’t want to see the Elm Heights neighborhood lose their coffee shop.

Hearing that their friends at The Owlery Restaurant and Rainbow Bakery were successful using similar business ideals was what tempted the Sweets to sell their share in a brick-oven pizza business in Arkansas, purchase a wood-fire food truck in Arizona, and travel back to Bloomington — a town they had left about seven years earlier. They set up shop for a few months in parking lots of friends’ businesses and at events, hoping a brick-and-mortar space would turn up. Within a couple of weeks of opening their space on the square, King Dough became so busy they had to purchase a mixer for their pizza dough, abandoning the romantic idea of kneading each crust by hand.

According to Alicia Sweet, she and her husband threw their lives in the air, and the cards have fallen in their favor. And Bloomingtonians have responded well to their nontraditional methods. As its friends have done, King Dough continues to grow: They have many new and repeat customers, they keep hiring more employees, and they’ve started new projects such as making their own gelato and pulling their own mozzarella. However, this growth hasn’t stopped the Sweets from operating the King Dough food truck. They are a regular feature at BrunchLab, a series of coffee tastings and information sessions hosted by the Uel Zing Coffee Lab on West Kirkwood.

Samuel Sveen, the owner of Uel Zing, originally met the Sweets while selling his cold brew coffee at a food cart event, and they soon began collaborating. Sveen similarly met and began to work with the folks at The Tamale Cart, which is the same Mexican street-food cart that its owners closed in September to help their friends open King Dough.

Sveen says Uel Zing’s business is based on wholesaling a quality product, and his coffee cart “serves more as a billboard that conveniently sells coffee.” Even if you haven’t tasted a cup of joe by Uel Zing, chances are good you are familiar with the yellow bicycle cart peddling around town or would recognize the unique lightning bolt emblem that serves as the shop’s logo. In line with the Sweets’s idea of making Bloomington the best it can be, Sveen says he has found that many local businesses are keen to collaborate and are doing things worth collaborating on. He’s even working with The Pourhouse Cafe, a coffee shop on East Kirkwood. “I think it’s cool because we could seem like competition, but since we are such a niche company, we can supply them in that one niche of their larger coffee business,” Sveen says.

You can find these businesses and more collaborating all over town — many of which participate in Food Truck Friday, hosted in The Chocolate Moose’s parking lot in warmer months. The weekly collaborative effort brings food trucks into one convenient location for patrons to gather and eat. And if any of these food trucks are on the same path as King Dough, they might pop up as your next favorite restaurant on the Square before you know it.