B-town Marathon Runner to Compete at Olympic Trials on Saturday 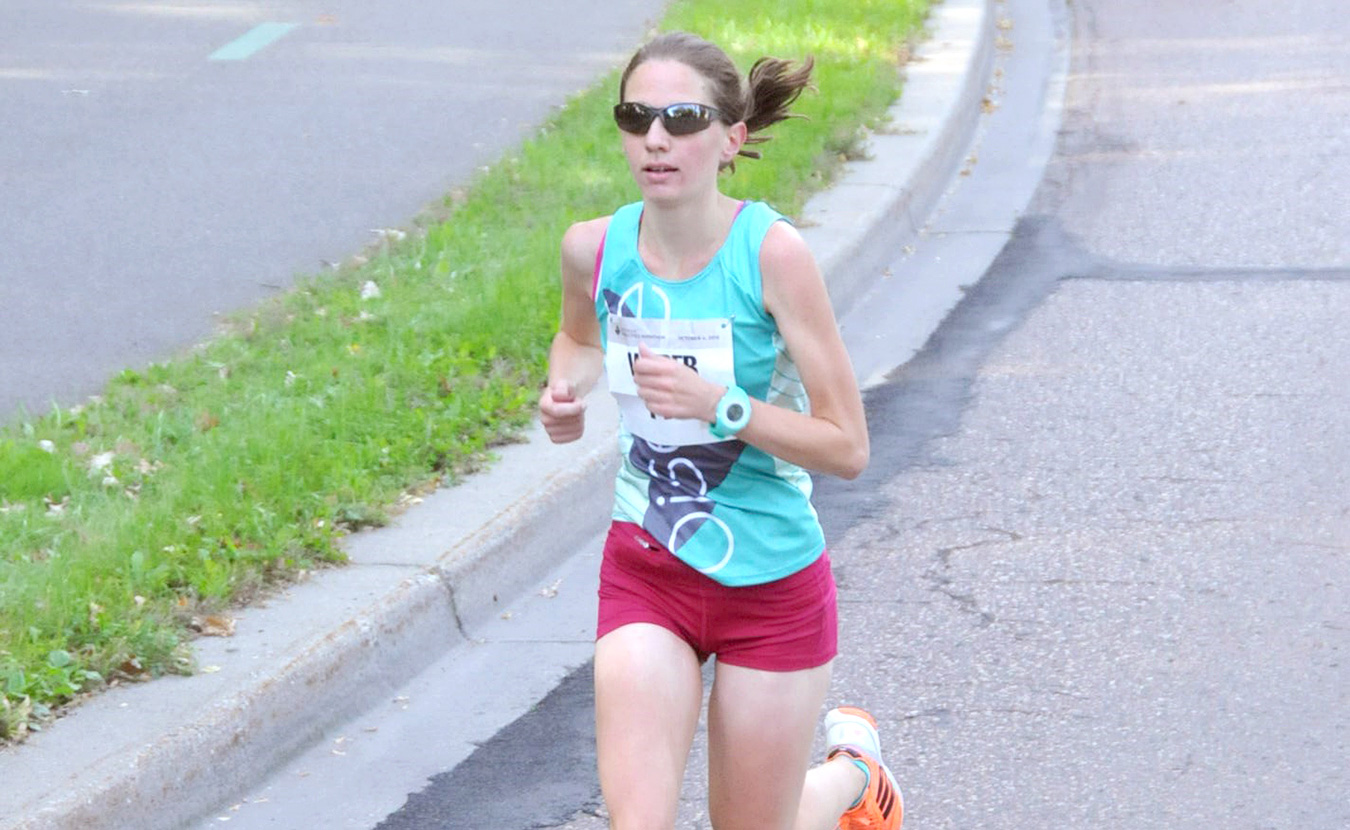 Anna Weber put her academic life on hold to work toward her goal of running in the Olympics. She has qualified to compete this Saturday for a spot on the 2016 U.S. Olympic marathon team. | Courtesy photo

Two hours, thirty-eight minutes, and forty-one seconds later, Anna Weber qualified for the 2016 Olympic Team Trials — Marathon by running in the Medtronic Twin Cities Marathon in Minneapolis this past October. Her impressive performance not only left her wanting more but also put her in a position to run with 244 other women in Los Angeles, all competing to be a part of the U.S. Olympic Team. What seemed at that time to be in the indistinct future turned into this Saturday pretty quickly.

Last fall, Weber decided to put the yellow light on working toward her Ph.D. in analytical chemistry at Indiana University and focus on being a professional runner. With school on pause, she was able to amp up her mileage, find a company to sponsor her races, and, most importantly, realize her dreams.

“I haven’t looked back,” Weber says. “The time away made me realize that the path my life was going just wasn’t the right one for me.”

Five years of competitive running in cross country at Marquette University, as well as 5K and 10K runs in the offseason, fulfilled Weber’s desire to run. However, she had become captivated by it much earlier in life.

“I started running in the sixth grade,” Weber says. “On the first day of practice, I beat everyone except for the top guy on the team, so I was hooked from then on.”

Now Weber has a coach, Tim Bumber, the same man who coached her in high school in Michigan City, Indiana. She has landed a deal with a running apparel company, called Oiselle, to sponsor her by covering race and shoe costs and sending her swag. Oh, and she is pounding out approximately 100 miles each week. After Saturday, Weber will have run four marathons in 16 months. While training, she runs roughly 100 miles per week and has many methods of cross-training. | Courtesy photo

“I probably do more ‘speed’ work than most marathoners,” Weber says. And for cross-training, she hones in on her core — 15 minutes of abs conditioning per day and a yoga class twice per week have helped Weber build muscle to balance her endurance training. Strength training sessions twice per week focus on hamstrings, hips, lower back, and arms. Her preparation has Weber calm and focused heading to the Olympic Trials later this week.

“My training cycle could not have gone better, which is a rarity when training for a marathon,” Weber says. “I also work with a sports psychologist, and he has taught me how to focus only on the things I can control and not on external factors that I cannot, which has helped tremendously.”

With all of her most difficult training behind her, Weber is set up for a smooth race. Her qualifying time put her at No. 55 on the lineup of women, already a huge accomplishment. The marathon course for the trials starts with one 2.2-mile loop, then four 6-mile loops, on South Figueroa Street in southern Los Angeles. The top three finishers will represent the United States in the 2016 Olympic marathon in Rio de Janeiro in August, and the woman who comes in fourth place will serve as an alternate.

“I remind myself of my fitness and all the work that got me to the starting line, and I try to send my mind to a calm place,” Weber says. “I know I will have a good race when I’m able to dance along to the music played during the pre-race festivities.”

Bloomington has done its best to support Weber as well. She calls the town a “training haven” and recommends routes around Griffy Lake Nature Preserve, Lampkins Ridge Road off of State Road 446, and Paynetown State Recreation Area. The terrain isn’t the only place she has found support. The community and local businesses are standing behind her as well.

“I have received messages of support from Bloomington runners, chemistry colleagues, friends, and strangers that have humbled me and have made this crazy adventure completely worth it on the days I questioned myself,” Weber says. “After the trials, I will have run four marathons in 16 months, so I will definitely take a little bit of time off. I plan to use that time to complete my master’s degree.”

Then, depending on how her legs recover, Anna said she will be ready to get back to work and start training once more. Her next goal: to run a qualifying time this spring for the 2016 Olympic Team Trials for Track & Field’s 10K event, which will take place July 1-10.

To learn more about Anna Weber’s marathon training and to keep up with how she does this weekend, check out her blog. And click here for local off-road trail suggestions by ultramarathoner Miranda Addonizio.