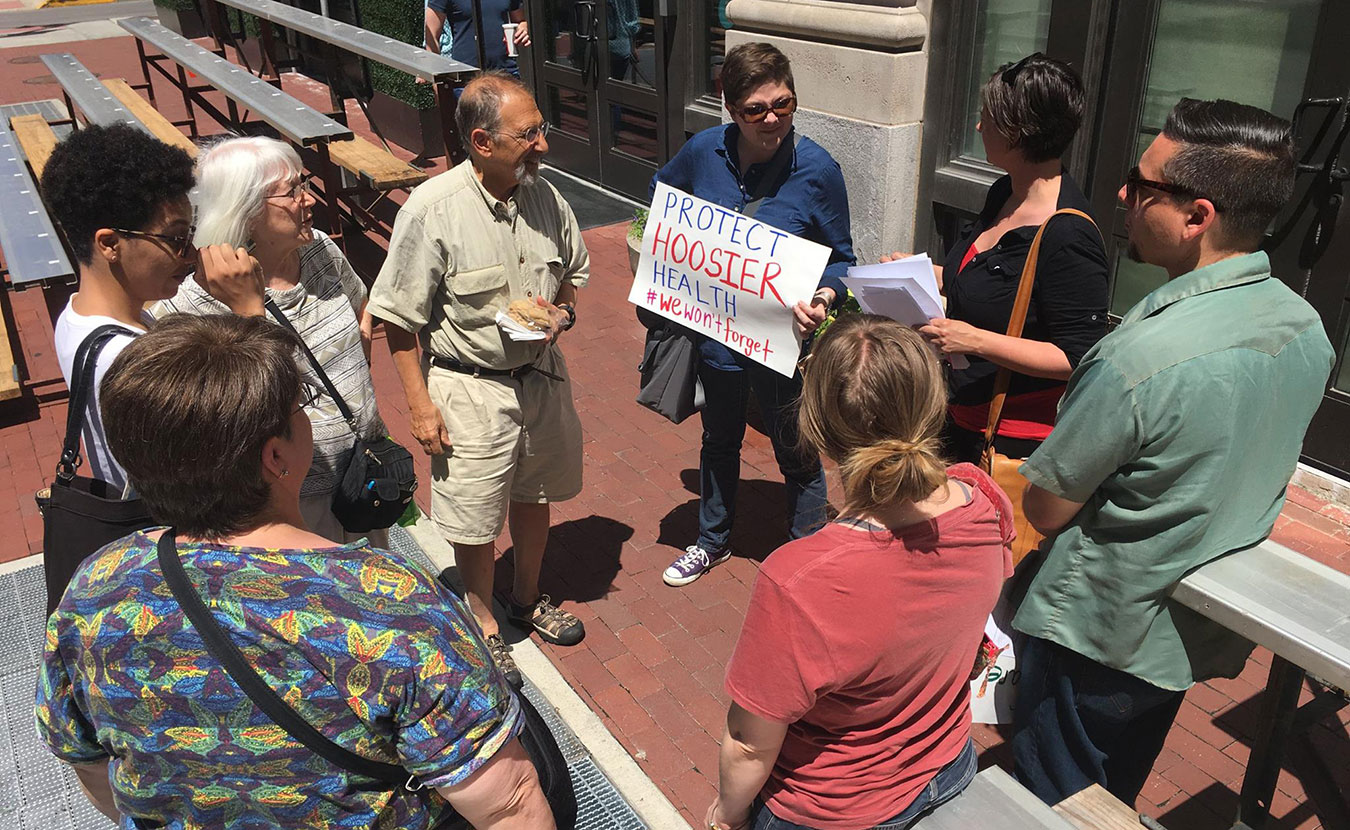 For Kate Hess Pace, founder of the progressive grassroots group Hoosier Action, voting matters, but there are also “many, many other ways for people to build power for change.” Pictured here, members of Hoosier Action gather outside of Senator Joe Donnelly's office before meeting with his state director to discuss health care. | Courtesy photo

So says Kate Hess Pace, a community organizer who has returned to Indiana after a seven-year sojourn in Minnesota. She has founded Hoosier Action, a citizen-empowerment organization that aims to rouse the troops across a multicounty area in south-central Indiana.

In operation only since April, Hoosier Action has already helped organize a civil disobedience event in the nation’s capital in July, calling attention to the pending Obamacare repeal, as well as a door-knocking campaign in this city, alerting folks to Indiana Gov. Eric Holcomb’s proposed Medicaid cuts.

The Republican Party’s efforts in Congress to kill the Affordable Care Act has not succeeded during the current session. Hoosier Action sent five people to D.C. to occupy Sen. Todd Young’s office on July 19, along with some 300 other activists from around the nation occupying their own senators’ offices. It’s hard to say what effect they had on the effort, but repeal and replace ultimately failed. Members of the Hoosier Action contingent were arrested and charged with misdemeanors. “Taking arrest isn’t something we take lightly,” Hess Pace says. “It’s not something we’ll do regularly. It is a tool in the toolbox in the ways that we assert and build our power.

“We’ve been talking to hundreds of people who stand to lose their health care if the ACA is repealed, and so that, for us, required disruption to make our voices as loud as possible that this vote was going to kill people across the state of Indiana.”

The dramatic failure of repeal and replace doesn’t mean the story’s over, Hess Pace says. “Unfortunately, Congress is not finished doing potentially horrific things. They do have to vote on the budget by the end of September. It’s looking like the budget has major cuts to whole swaths of things that matter to people.”

Hess Pace calls Hoosier Action a member-owned and -driven group. “Organizing, in some ways, is a set of deep and powerful invitations to people to think differently about what’s possible — and to take a couple of steps toward that vision. We try to build a base where people are leading the organization.”

She grew up during the Age of Reagan. “I remember Iran-Contra,” she says. “I felt aware of the world for most of my childhood. I liked government class. I’ve been around a lot of people who’ve been through hard experiences. That shaped me, I’d hope, into a compassionate person.”

Hess Pace attended Monroe County public schools and went on to graduate from Indiana University with a degree in an independent major, Public Space and Democracy. Then it was on to Cornell University for graduate school.

Out in the world, Hess Pace found her calling in Minneapolis and St. Paul with a faith-based community organization called Isaiah, whose guiding principle is the biblical plea: “Merciful God, may your love and vision be evident in every action and deed as we fight against the powers of hate, corruption, and greed.”

With Isaiah, Hess Pace worked on or led successful campaigns to establish a state Homeowners Bill of Rights, defeat a state voter ID amendment, and push for curbs on predatory lending. As time went by, it occurred to her that smaller towns could stand some community organizing as well. Her family has lived in southern Indiana for four generations, so she decided last fall to come back home and start up an organization here. Hess Pace (she’s taken each of her parents’ surnames) says her family is enthusiastic about her work. “They’re attuned to politics,” she says. “And they’re happy I’m back.”

There’s plenty of that work for her to do. “Monroe County, as far as I know, has some of the lowest voting rates compared to the seven counties around it,” she says. “We will try to figure out how to increase voter participation across Monroe County and then across the whole congressional district.”

Another hard-driving, serious, smart woman might make a lot more money in the corporate world. Hess Pace has never felt the pull there. “Money isn’t a great motivator for me,” she says. “I find the world around me largely intolerable. People have to work too hard and struggle too much for really basic things. I’m so grateful for this vocation.” She’ll be doing a lot in the coming months and years. There’s a proposed requirement for people to go to work if they want to keep their Medicaid benefits, even if they’re undergoing chemotherapy or have mental health problems, she says. Then there’s the opioid abuse problem. She’ll try to understand where Hoosier Action might fit in with the many organizations calling for increased government spending on treatment and prevention. Hess Pace also mentions the affordable housing issues that bedevil both Bloomington and New Albany (where HA will also focus organizing efforts).

Hoosier Action now has about 75 dues-paying, voting members. Hess Pace sets up regular training sessions for those members to gain team-building skills. She also conducts quarterly, daylong leadership-training seminars for people from across the state. “We want to give people whole sets of skills: How do you build public relationships, what is power, how do we wield it, and how to think about strategic campaigns,” she says.

These efforts and Hoosier Action’s more attention-grabbing demonstrations have brought a spotlight to Indiana’s progressive grassroots movement. The monthly progressive magazine In These Times, in its July 6th edition, focused on Hoosier Action and Jesse Myerson, who helped Hess Pace get the organization off the ground. The article’s headline asks, “Can Indiana Be the Stronghold of the Resistance?”

Myerson called Hess Pace “a visionary organizer” in the piece. He quotes her saying “Power is organized people plus organized money.”

Many of us were taught in elementary-school civics class that the ultimate power lies in the people, that our vote is our tool. Hess Pace says that’s only part of the formula. “Voting is only one form of participation,” she says. “We’re not taught a lot of other ways to participate. Part of what we’re doing is training and working with people to build their capacity to act for themselves in their communities, to be democratic practitioners.

“Because other people in this country are clear about power, they’ve constructed a set of things that have eroded both our democracy and the power of our individual vote, whether that’s voter ID or gerrymandering. So, yes, your vote matters but there are many, many other ways for people to build power for change.”

Might Hess Pace be even more effective as a political candidate herself? She laughs at the notion. “I like where I am. In a robust democracy, you need both political candidates who are committed and a constituency that’s in a struggle for a better country. My work is building that constituency and pushing as hard as we can on public officials.”

So Hess Pace won’t be sending out her resume any time soon.