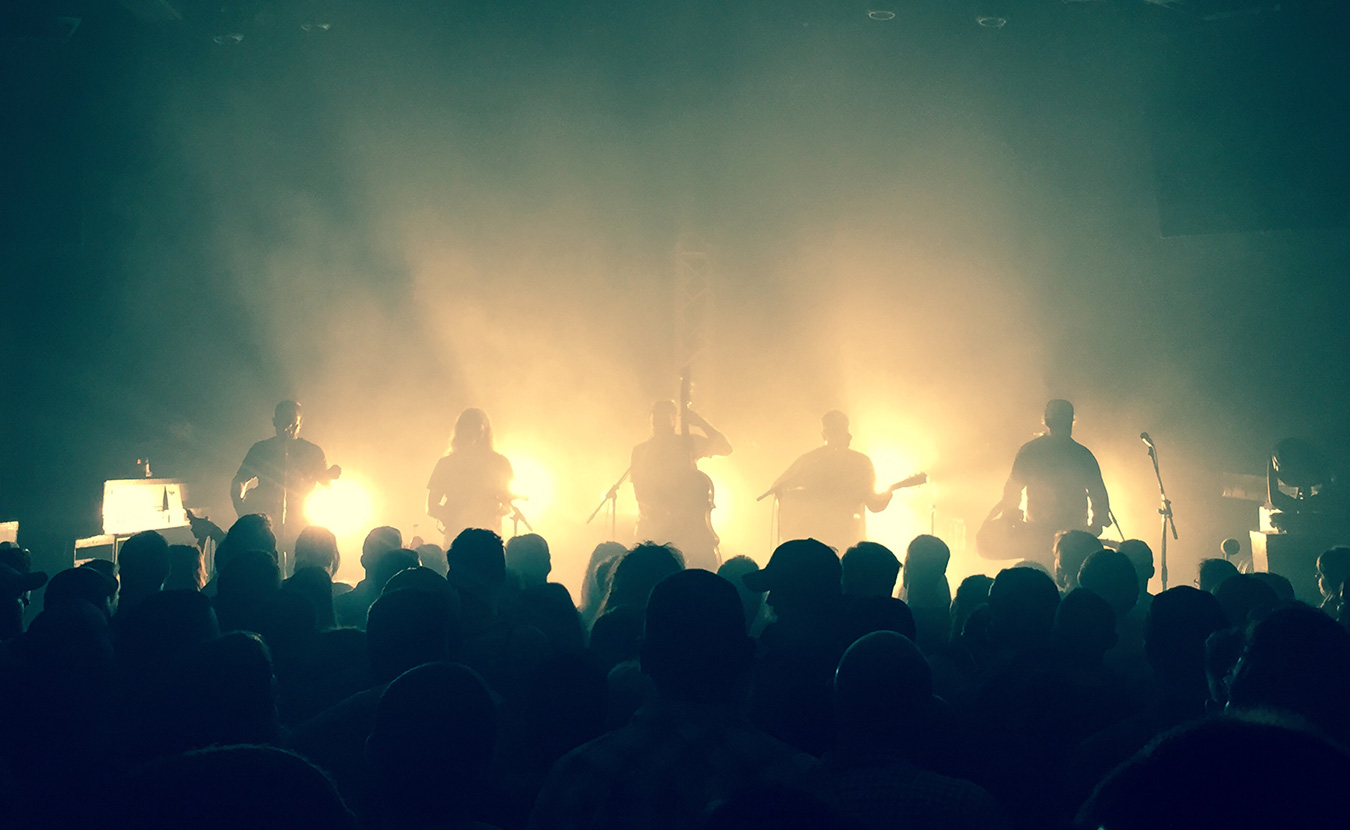 Bill Monroe and his Blue Grass Boys created a cradle of bluegrass music in Bean Blossom, Indiana, that continues to influence musicians of all genres today. Anders Beck of Greensky Bluegrass (pictured here performing at The Vogue in Indianapolis in January) credits the Grateful Dead's Jerry Garcia for his introduction to bluegrass. Garcia was heavily influenced by Monroe, and even visited Bean Blossom in 1964 to audition for him. | Photo by Samantha Eibling

The message lit the dark screen of my phone. Shocked and saddened, I flipped on the television and was startled at the swift outpouring of grief. All things Purple dominated news channels. Minneapolis, the city where Prince was born and continued to make his home despite his great success, was reeling over a hometown hero lost.

Despite my growing up in Bloomington, Monroe and the significance of his music didn’t register on my radar until his death in 1996. My mother had called. Her husband, Teddy, was devastated. He had come of age in the rolling, wooded hills of southern Indiana where Monroe and his Blue Grass Boys were adopted “locals.” Monroe’s music and the festival he started in Bean Blossom, Indiana, had become a big part of Teddy’s life, just as Prince’s music had helped to shape mine. Though we may sometimes forget the unrequited crushes and years-long obsessions we’ve had with musicians as they drop on and off our radar, it is important to honor their cultural significance. These innovators articulate our triumphs and struggles. Their music draws from our past while simultaneously propelling us forward. An oral history of human experience, music moves across time and space, documenting joy and sorrow, love and war. It becomes the soundtracks of our lives, nursing us in times of need, mending our broken hearts, and cheering us on in our celebrations.

The world’s attention may be focused on the loss of a Purple Prince, but the color blue will soon brighten the landscape. This summer, musicians will celebrate all things bluegrass at the 50th anniversary of the Bill Monroe Memorial Bean Blossom Bluegrass Festival. The nonstop eight-day festival runs June 11-18, with more than 70 performances and a world-class lineup that includes such musicians as The Del McCoury Band, The Grascals, and Dailey & Vincent.

Playing mandolin, Monroe got his professional start in northern Indiana. While working in an oil refinery during the week, Monroe and his brothers played local dances on the weekends. Before long, the Monroe Brothers began performing on radio shows and touring in the Midwest and by the mid-1930s recorded their first session with RCA-Victor. In 1939, Monroe appeared at the Grand Ole Opry, where he would return to perform throughout his career.

After playing a show at the Brown County Jamboree in 1951, the popular Monroe fell in love with the beauty of southern Indiana. Several months later, the Kentucky native purchased the Jamboree and began to change the landscape of American music out of tiny Bean Blossom.

Widely acknowledged as the “Father of Bluegrass,” Monroe was a paradox. He was stubbornly committed to old-time music and opinionated about how to play and arrange stringed instruments. But as a revolutionary, he slid the traditionally lower country keys higher to match his “high, lonesome” tenor and encouraged musicians to create their own unique sounds.

Monroe pulled from an eclectic range: Irish jigs and Scottish bagpipes, old-time, and Appalachian Mountain music alongside gospel hymns, jazz, and the African banjo. Monroe’s characteristic improvisational playing of stringed instruments — known as “breakdowns” or jams — showcased one instrument at a time and became one of the hallmarks of bluegrass.

Over their storied run, Monroe and his band nurtured more than 140 members — including notables Lester Flatt, Earl Scruggs, Del McCoury, John Hartford, Vassar Clements, and Peter Rowan — who went on to break traditional constraints and collaborate across genres. Bluegrass and Monroe himself continue to be an underappreciated influence and silent partner to rock ’n’ roll, folk, the psychedelic music of the ’60s, and the jam band progression from the Grateful Dead to Phish. Just as Bill Monroe and his Blue Grass Boys provided an incubator for artists who continue to impact music today, Bean Blossom served as a cradle of sorts for bluegrass musicians. It was a bluegrass destination even before the annual Bean Blossom Bluegrass Festival officially started in 1967. Jerry Garcia and his Black Mountain Boys bandmate Sandy Rothman — inspired by Bill Keith’s progressive style on banjo and Earl Scruggs before him — drove from California to Bean Blossom in 1964 to audition for Monroe. Though he failed to get the gig, Garcia, who later fronted the Grateful Dead, mastered his own style of banjo, which some credit as influencing his unique style on the electric guitar.

Though Monroe’s most obvious influence on rock ’n’ roll is Elvis’ recording of “Blue Moon of Kentucky,” it is in the work of artists like Peter Rowan and Jerry Garcia that the lineage of bluegrass begins to branch across other musical forms. As Rowan — who would later work with Garcia, Janis Joplin, and The Band, among others — explains it, “When you stand next to the burning fire of a man who has created bluegrass music, you get warm and you learn to build your own fire.”

Rowan continues, “The real psychedelic experience was in bluegrass music in that it had so many counter rhythms. That seemed to have the intensity that we were looking for in the 1960s.”

Generations of psychedelic, folk, and jam band musicians and fans know Monroe through the musicians he inspired. Anders Beck of the Michigan band Greensky Bluegrass explains: “I found bluegrass through the back door, through the Jerry Garcia route. That’s how I got to listening to Bill Monroe and Earl Scruggs. It’s really interesting how many people in our generation got into acoustic music through that channel.”

For his part, years after he obtained cult-like popularity as the Grateful Dead’s guitarist, Garcia readily admitted, “I still want to be a Blue Grass Boy — in the worst way.”

A few days after Prince passed, Anders Beck and Paul Hoffman of Greensky Bluegrass and their friend Bill Nershi from The String Cheese Incident played “When Doves Cry” at the Bluegrass Ball in Denver, Colorado. The trio is affectionately dubbed ‘Green Cheese Bluegrass.’ It was a fitting tribute to the Purple One.

A few days later, when my ten-year-old daughter’s friend walked through our kitchen, she looked at me, and said, “Did you know Prince died? And Bowie!” I sadly said, “Yes.” Turning to my daughter, she asked, “Do you know who The Band is?” Stella, a festival veteran and named after a Grateful Dead song, rolled her eyes and responded, “YES!” I kept my eyes down at my computer, a large smile passed over my face as I dropped my imaginary microphone.

Dozens of bluegrass festivals now grace the summer months across the world. Fans and musicians gather to commune with one another. We celebrate our love of a country boy’s music and the way its influence was nurtured in and spread from a tiny town in southern Indiana. These festivals have become a tradition in my family. This summer will mark our fifth trip to RockyGrass in Lyons, Colorado, and our first experience of the festival in Bean Blossom, Indiana, that started it all. I cannot help but notice with gratitude the power music has had in our family. The 50th annual Bill Monroe Memorial Bean Blossom Bluegrass Festival will be a nonstop eight-day celebration of all things bluegrass, June 11-18. With more than 70 performances and a world-class lineup, it is impossible to go wrong, but here are just a few shows writer Samantha Eibling says not to miss …

Samantha Eibling is an E-RYT 200, RYT 500 certified yoga teacher and blogger passionate about helping students cultivate deeper awareness and connection to their bodies, minds, and spirit. She utilizes humor, personal experiences, social issues, and a healthy dose of humility to impart the wisdom of yoga into her teaching style. Sam encourages students of all ages, backgrounds, and abilities to trust their instincts and personal journeys as they discover the practices of yoga and meditation. She offers individual sessions, workshops, trainings, mentoring, and custom classes at www.SamanthaEiblingYoga.com and at her home studio, Vibe Yoga.
Tagged
Comments