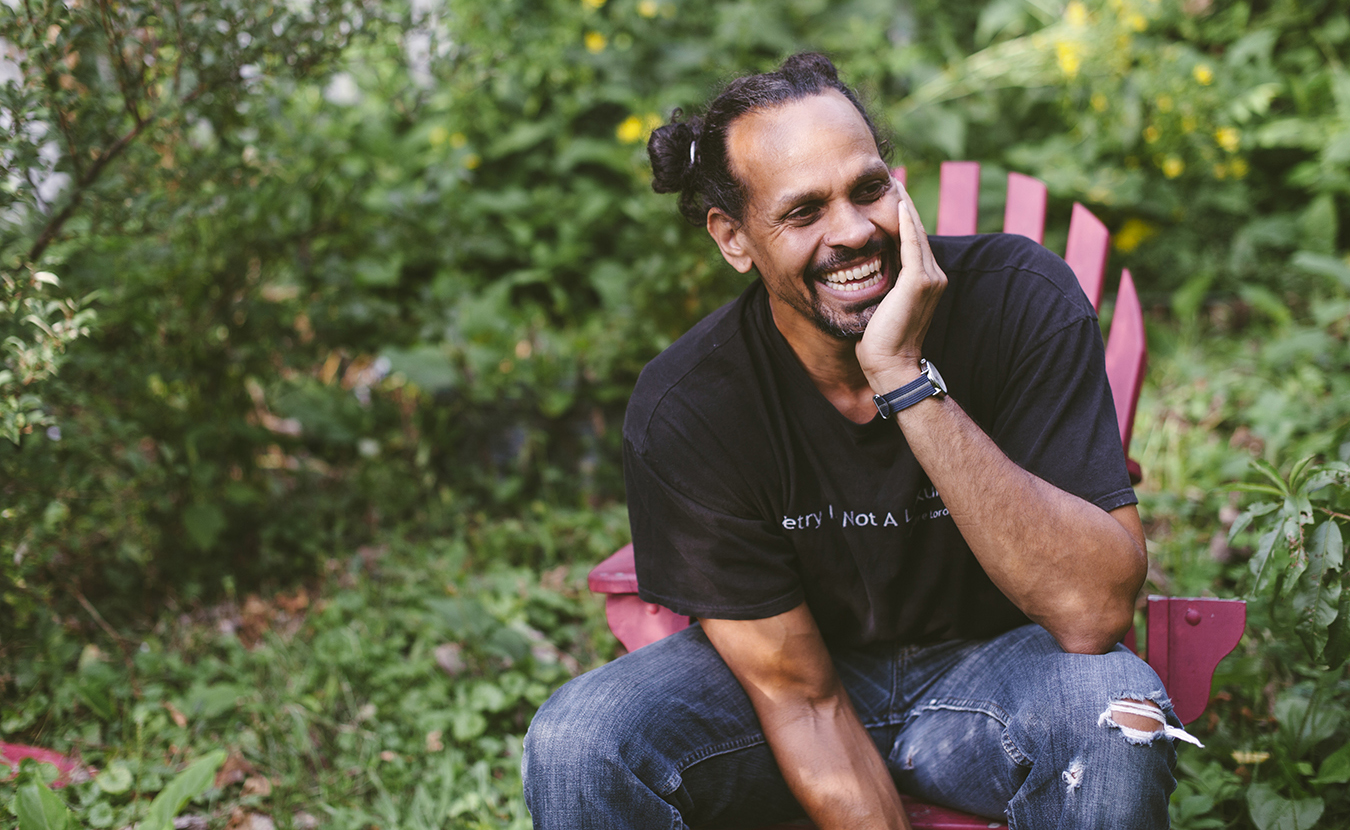 Among the Finalists for the National Book Award is "Catalog of Unabashed Gratitude," a collection of poems by Indiana University professor Ross Gay. | Photo by Natasha Komoda

Editor’s Note: The National Book Foundation just announced the Finalists for the National Book Award. Among them is Catalog of Unabashed Gratitude, a collection of poems by Indiana University professor Ross Gay. In this profile by Brian Hartz, Gay reflects on his work, on the powerful influence Bloomington has had on his poetry, and what this national recognition means to him.

When Bloomington poet Ross Gay found out in September that his latest book of poetry, Catalog of Unabashed Gratitude (University of Pittsburgh Press, 2015), had made the Longlist for the National Book Award for poetry, the news came as quite a shock. It was completely “out of the blue,” he says, indulging in a rare cliché. The cover of Gay’s “Catalog of Unabashed Gratitude.” Courtesy image

“I looked at the other people on the list and felt humble and glad,” he says. “There are incredible, incredible writers on the list. I’m floored. Some are new to me; some are folks I’ve known for years.”

Gay’s attitude toward possibly winning the National Book Award embodies the humility of someone who has little use for baubles with which to line the mantel. The 41-year-old Indiana University associate professor of poetry says being nominated for awards isn’t something he strives for, yet it represents an opportunity to share his poetry with a wider audience.

“More folks being exposed to your work — that’s a gift,” he says. “That’s the point for me. I don’t feel pride, but I feel glad.”

Gay is the author of two other collections of poetry, Against Which (CavanKerry Press, 2006) and Bringing the Shovel Down (University of Pittsburgh Press, 2011), and he co-wrote Lace & Pyrite: Letters from Two Gardens (Organic Weapon Arts, 2014) with Aimee Nezhukumatathil. Bringing the Shovel Down drew rave reviews from critics at the Pittsburgh Post-Gazette, The Philadelphia Inquirer, and The New York Times. His past accolades include a fellowship from the Cave Canem workshop for black poetry and a scholarship from the Middlebury Bread Loaf Orion Environmental Writers’ Conference. Harvard University’s Radcliffe Institute for Advanced Study awarded Gay a fellowship for the 2015–2016 academic year.

Gay was born in Youngstown, Ohio, but grew up in Levittown, Pennsylvania. He earned a Ph.D. in English at Temple University in Philadelphia. Living in the “City of Brotherly Love” in his 20s and early 30s had a profound impact on his life and work, evidenced by poems such as “To the Fig Tree on 9th and Christian.”

“It’s a Philadelphia poem, but it’s a Ross Gay poem,” he says. “It’s about me. That fig tree poem, I have the same kind of poem but I wrote it in Bloomington. Because they are both coming out of me, I’m the first place that those poems take place in.” Gay says Bloomington has also exerted a powerful influence on him and his writing. In 2006, he surprised himself by moving here to take a teaching position in IU’s creative writing program. In a 2008 interview with The Cortland Review, he talked about how people he’d met at the Bloomington Community Farmers’ Market began showing up as characters in his poems.

“I love my community,” he says. “There are as many wonderful people here as any place I’ve ever been. I have dear friends, folks interested in things that are interesting to me. A lot of people caring about each other in a neat way. That’s the big thing.

“They are both places I adore,” he says of Philadelphia and Bloomington. “But obviously they are both very different places.”

In Bloomington, Gay has become actively involved in promoting poetry and literature, both on and off campus. He teamed up with fellow writers David Torneo and Chris Mattingly to found Ledge Mule Press, and he also founded the online literary sports magazine Some Call It Ballin’. Gay is a former college football player and gets out on the basketball court whenever he can, as both a player and coach. He says a shared love of sports is what initially helped bring him, Torneo, and Mattingly together.

“When we get together, we try to play basketball.”

But love of poetry and prose is what continues to drive and unite them, Gay says.

“We are invested in each other’s writing. But we love each other as people. Primarily, it’s an interpersonal endeavor; it’s an endeavor of love. [Dave] writes beautiful poems about family, and about all of these sort of events of heartbreak and aging. He’s a wonderful poet, [but] he’s kind of an all-around artist. He’s writing plays, short stories, he’s making a lot of different kinds of art. He’s also this incredibly well-read person. He’s probably the person I turn to most — he’s a kind of teacher. He’s always recommending books, and showing me ‘why.’ He’s had a big impact on me in terms of my own aesthetic development.

“Chris,” Gay adds, “was one of my students. He was one of those students that you feel immediately is more of a co-traveler, a peer. And he writes these incredible poems about family and about place. Just unbelievable poems about his child and his past … and some poems of transformation, heroism, and redemption. Just remarkable.”

Thus far, Ledge Mule has published two handmade, limited-run poetry collections and released a 7-inch vinyl record featuring poets reading their work. It has also staged live poetry and music performances. “We’re defining it along the way,” Gay says of Ledge Mule Press. “We have ideas for projects and events, things that will be exciting or weird or whatever. We are all kind of dreamy, so I’m sure we’ll just figure out stuff that’s going to be really compelling and see how it goes.” “I looked at the other people on the list and felt humble and glad,” Gay says of making the Longlist for the National Book Award for poetry. “There are incredible, incredible writers on the list. I’m floored. Some are new to me; some are folks I’ve known for years.” | Photo by Natasha Komoda

In discussing his own work, Gay says much of it is highly personal, though not in a way the reader might immediately recognize. “My life is totally in there,” he says. “As to whether or not it’s overtly in there, sometimes yes, sometimes not at all. Sometimes I’m writing about larger concerns, whether or not they, quote unquote, actually happened. Every poem is sort of out of my life in a certain kind of way.”

Compassion and violence are the topics Gay is most likely to dwell upon when he sits down to write poetry. “I think those are themes I’m going to circle around for the rest of my life,” he says. “My poems lately are more joyful and reveling in the natural world, but also aware of violence and environmental degradation. Those are going to be themes that I return to.

“All that I’m interested in in my work and in my life,” he adds, “is how we love and hate and relate to each other; that’s kind of all I care about. And I suspect that’s probably going to be the thing that I continue to care about.”

That’s not all he cares about. When asked about the quote, “Poetry is not a luxury,” which is taken from an Audre Lorde essay by the same name and is emblazoned on the T-shirt he wore during the photo shoot for this article, Gay says, “It’s essentially saying that what poetry gives us is not excess; it’s a necessity. It’s a sustaining aspect of our lives, in our lives. So it’s not luxurious, in other words. It’s necessary.”

“All that I’m interested in in my work and in my life,” Gay says, “is how we love and hate and relate to each other; that’s kind of all I care about. And I suspect that’s probably going to be the thing that I continue to care about.” | Photo by Natasha Komoda

It’s obvious that Gay cares deeply about the role poetry plays in society and culture, but he hesitates when asked why people should read it and write it.

“I don’t know if people should do anything,” he says, “but I can tell you it provides me an opportunity to encounter myself, and encounter other people as well, more clearly and more compassionately. Reading a poem can be a really intimate and compassionate act, just like writing a poem can be, which might speak to the value of it. Often poems are exercises in the imagination, and it’s the imagination that often gets us through.”

Gay says he doesn’t have a favorite poet or poem, and he doesn’t like any of his books any better than the others. “They’re all interesting to me in their own ways,” he says. “I’ve been very happy with the way people are responding to the newest book.”

He says what inspires him lately (besides too many poets to name) is music of jazz saxophonist Kamasi Washington. “I’m listening to this guy a lot right now. I’m not sure how, but he’s influencing me. I’ve been deeply immersed in his record.”

Gay also draws inspiration from his love of gardening. His Bloomington home is lush with vegetation, and he serves on the board of the Bloomington Community Orchard. His other hobbies include bicycling, exercising with kettlebells, cooking with his friends, and drawing. He reckons that winning the National Book Award won’t exactly change his life.

“I don’t know,” he says when asked what winning the award would mean. “I suspect I’ll just keep working on my projects, the community orchard, riding my bike around.”

The National Book Award winners will be announced on November 18. Click here for more information.

Ross Gay serves on the board of the Bloomington Community Orchard. Click here to read our story on the nonprofit.

Keep checking with Limestone Post for his two-part podcast with Ledge Mule Press co-founder Chris Mattingly, who talks about growing up in a famous baseball family (his uncle is Los Angeles Dodgers manager Don Mattingly), his escape into punkdom, and his awakening as a poet.