Explore — Even Dive Into — Quarries During Limestone Month 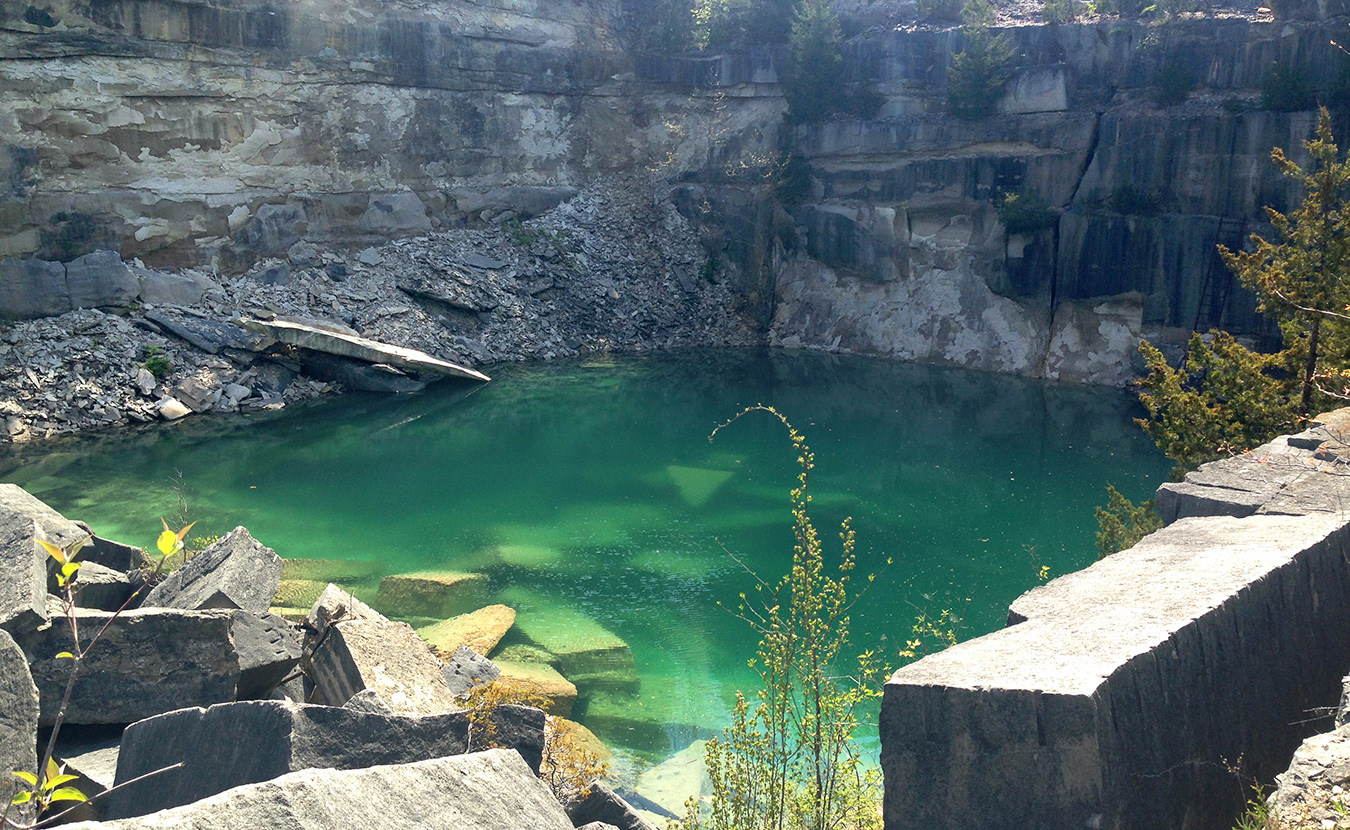 Did our recent story on Rooftop make you want to get out and see a local quarry? Maybe you’ve always wanted to venture to one but didn’t know where to go or were too wary of trespassing violations? As a part of Indiana Limestone Month, three guided tours offer the chance to see local quarries this June (more if you are willing travel a bit farther). Sorry, buddy, Rooftop isn’t one of them ….

If diving into a quarry is on your bucket list, check out White Rock Park in Saint Paul, Indiana, about an hour and a half from Bloomington. Though it’s not an official Limestone Month event, why not take your own celebratory day trip? The highest cliff jump is about 33 feet and — best of all — you don’t have to worry about trespassing laws. Besides, quarry operators nationwide are being urged by the U.S. Mine Safety and Health Administration to beef up security and “to convince potential trespassers and partiers to ‘Stay Out and Stay Alive.’” Everyone’s heard the story of Indiana limestone — the Empire State Building, the National Cathedral, the Pentagon, and more are all made of it — but did you know that there is actually a geological feature in the area called Salem Formation? It is about ten miles wide and 35 miles long and is more than 90 feet deep in some places. Salem Formation limestone is so popular because it is incredibly durable (great for building) and holds fine detail (great for carving).

Though these quarries aren’t as iconic as Rooftop, they are pretty cool and the tours sound wonderful. The Old State House Quarry in McCormick’s Creek State Park is an abandoned quarry from the 1800s. The forest has taken over the limestone — covering it in mossy greenery — but back in 1878-1880, stone quarried here went to build the current Statehouse! You’ll also get to see fossils and learn more about environmental history preserved in the quarry walls.

Furst Quarry is located off Tapp Road and has eight quarry holes spanning more than 30 acres. Although this quarry closed in the ’70s, much of the equipment was left behind. Current land owner and tour leader Duncan Campbell told Indiana Preservationist Magazine, “The site is essentially rigged as it was when they were working.”

Maple Hill Quarry, now known as C&H Stone, has been around since the 1920s and, unlike a lot of local quarries, Maple Hill is actually still in use! Need a limestone slab? This is where you could get it. The guided tour, on Rockport Road, is described as a “rare opportunity.”

Are you in love with Indiana limestone (I mean, who isn’t? Wink wink … Limestone Post …) and want to check out all of what Limestone Month has to offer? You can tour old limestone buildings and tombstones, see sculpture exhibits, watch carvers at work at the Limestone Symposium, and more.