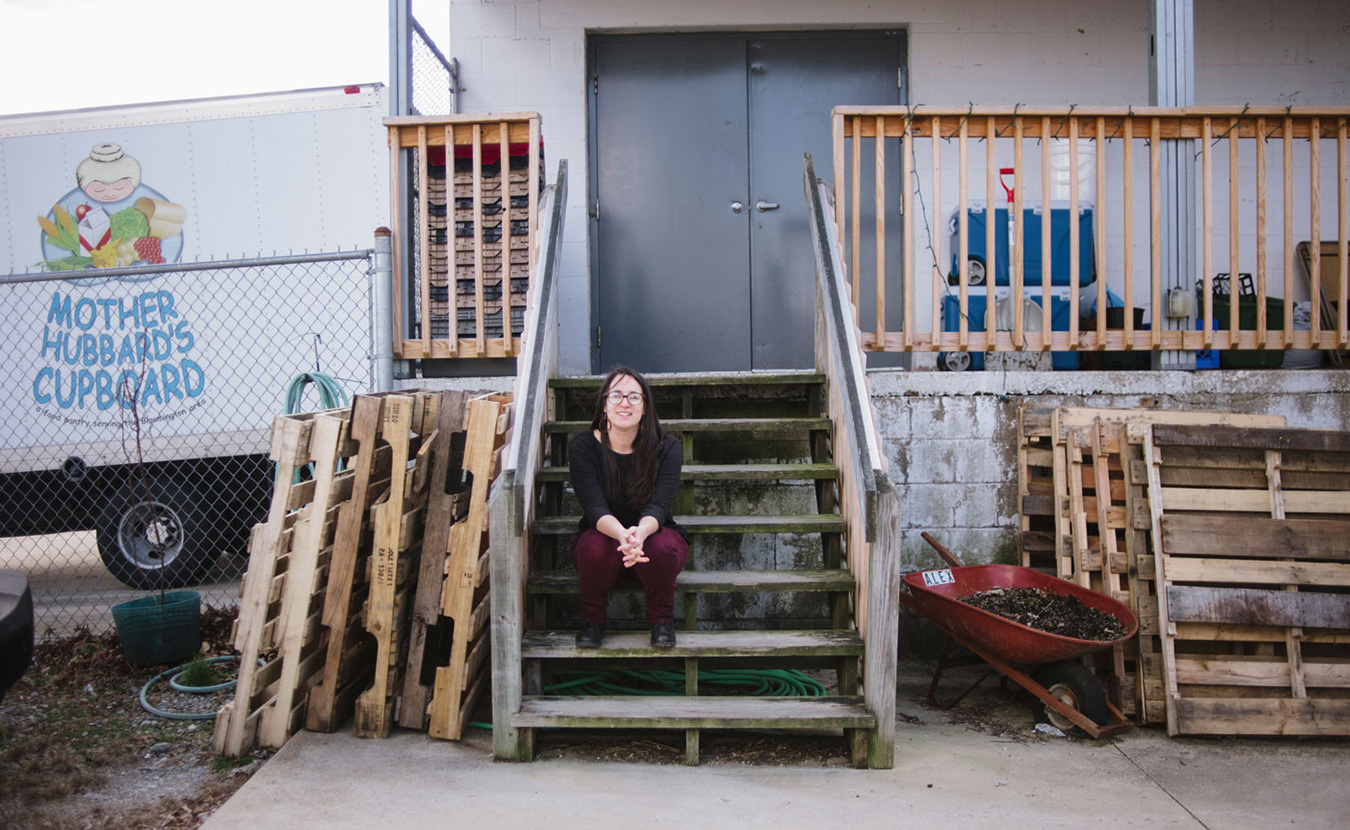 Stephanie Solomon, the director of education and outreach at Mother Hubbard’s Cupboard, says the problem of food insecurity is broader and more systemic than many people realize. Monroe County is tied for the fourth-highest hunger rate in the state. | Photo by Natasha Komoda

In this three-part series, Sarah Gordon investigates the problem of food insecurity and what local groups are doing about it. In part one, she addresses the popular misconceptions about the types of people who are in need of food assistance.

Zilia Estrada suggests Indiana Memorial Union as a location for our interview. She’s packed a sandwich from home, though, because the pizza and noodle bowls sold there are well outside of her budget. Recently, food in general has often fallen outside of her budget. Despite constantly looking for full-time permanent work, Estrada has had to cobble together part-time earnings for the past three years, rarely managing to earn enough money to buy a month’s worth of groceries after paying all of her bills. In other words, she’s food insecure — and in Monroe County, she’s in good company.

To be considered food secure, a person or household must have ready access to enough food, and sufficiently nutritious food, to maintain an active, healthy life. According to the Food Research and Action Center, 14.1 percent of households in Indiana were food insecure in 2013, up from 13.2 percent in 2011 and 11.1 percent in 2005. The numbers in Monroe County are worse: According to Feeding America, 18 percent of the population here was food insecure in 2014. We’re tied with Fayette County for the fourth-highest hunger rate in the state, after Marion, Vigo, and Delaware counties. Also, more than one in five children in Monroe County are food insecure.

In many respects, Estrada is part of a large, and largely overlooked, subset of the food-insecure population. She’s over forty and earned a master’s degree in information science from the University of Michigan in 2001. A bursar bill under dispute is the only thing keeping her from graduating with her Ph.D. in folklore from Indiana University. She defended her dissertation in 2012 — written, ironically, about the Bloomington Community Orchard, a local nonprofit invested in fighting food insecurity. She struggles to keep on top of mortgage payments on the house she bought in 2003. Zilia Estrada has been working on her backyard naturalized garden for almost a decade — it was a grass lawn when she bought the house. Estrada is one of the many members of Bloomington’s food-insecure population. | Photo by Natasha Komoda

Getting food stamps ‘just wasn’t in my repertoire’

Vicki Pierce, executive director of Community Kitchen of Monroe County, says there are a lot of popular misconceptions about the demographics of the people who rely on food assistance. Community Kitchen provides healthful food to people in need through a variety of outlets in Monroe County, including the large soup kitchen that serves sit-down meals at their South Rogers Street location. “People often think that primarily the people we serve here at dinner are homeless,” Pierce says, “but that’s really a small portion of the people we serve.” By far the largest group served at the soup kitchen is seniors struggling to live on their savings and pensions.  They also serve a lot of children and families with children.

For the first year of her financial struggles, Estrada went hungry sometimes simply because she wasn’t sure where to go for help. “Part of food insecurity is just not knowing what to do,” she says. “I never even thought of food stamps. It just wasn’t in my repertoire.”

She found Mother Hubbard’s Cupboard, a community food pantry focused on nutrition education, and that helped a lot.

These misconceptions about what “kinds” of people live with food insecurity impact every level of food-assistance programming, from consumers and agency operators to funders and legislators. Estrada has internalized those assumptions so thoroughly that she experiences a kind of cognitive dissonance when she thinks of herself as food insecure.

“Part of the weirdness of talking about food insecurity is that really, my life — to me — looks privileged, even though I don’t have money,” she says. “I’m aware of that all the time.”

But Estrada’s examples of her privilege are hardly the stuff of extravagant living. She has shelter, for example. She has pets, too, though friends in the animal rescue community have kept her supplied with food for them. She’s in a hip-hop dance group and is occasionally involved in community theater — neither of which costs her any money.

“I’m not toiling in the mines,” she says with a shrug.

She may not toil in the mines, but she does work. Throughout most of Estrada’s period of financial hardship, she’s been underemployed, but employed nonetheless.

Estrada’s financial struggles began when her mother passed away three years ago. They had lived together since 2001, when her mother moved in with her after retiring. Their joint income was enough for a stable living while Estrada was in graduate school. Together, they decided to live on only Estrada’s mother’s income for one semester so that Estrada could finish her dissertation.

But part way through that semester, Estrada’s mother unexpectedly died.

“When that happened, I didn’t have a job at all, which in retrospect was stupid,” she says. “But, you know, you make your decisions and you live with them.” She began looking for work right away but has managed to secure only contract and part-time employment ever since. When someone is food insecure, it is often difficult to find healthful food. Mother Hubbard’s Cupboard is a community food pantry focused on nutrition education. | Photo by Natasha Komoda

Stephanie Solomon is the director of education and outreach at Mother Hubbard’s Cupboard. She says the problem of food insecurity is broader and more systemic than most people immediately think. Food-assistance programs — ranging from Supplemental Nutrition Assistance Program (SNAP) and Women, Infants, and Children (WIC) to food pantries and soup kitchens — can feed people who can’t afford to feed themselves, but ultimately, that’s not what fixes the problem.

“The problem of food insecurity is often framed in terms of hunger,” Solomon says. “But really, when you’re talking about whether people know that they’re going to have the food they need to feed themselves and their families, the root of that issue is poverty. Our belief as an organization is that if we’re in conversation about hunger, we also need to be in conversation about what’s causing poverty in our community.”

For a lot of people, Solomon says, food insecurity can’t really be remedied with better food assistance alone. What would make the difference? “For a lot of folks, it’s affordable housing or good, affordable childcare.”

A more sophisticated way to evaluate a person’s income and assets for the purpose of assessing need might also be helpful. For example, Estrada’s furnace broke down this winter. She approached the Housing and Neighborhood Development office (HAND) to seek financial help for the repair but was declined because the value of her home was too high, without regard for what she actually paid for the house or what she pays every month toward her mortgage. In the end, Estrada was able to find a friend to fix her furnace for free.

Estrada acknowledges that she sometimes feels pressure — from other people or from that internalized idea of how a food-insecure person is supposed to live — to sell the house. At the end of the day, though, she’d end up paying as much in rent for a smaller place as she currently pays toward her mortgage. She also doesn’t want to sell the house where her mother passed away and where she’s spent over a decade cultivating the garden. And she doesn’t have the cash in hand to make the improvements necessary to put the place on the market anyway.

Even more important is the significance of her neighborhood. She has friends there — some are like family. If she’s really desperate, there are people she can visit for dinner. Estrada says she discusses her experience with food insecurity in order to help increase visibility of the issue. | Photo by Natasha Komoda

Most people don’t understand the importance of community in the promotion of food security, Solomon says. In 2013, Megan Taliaferro, then a master’s student in the sociology department at IU, collaborated with Mother Hubbard’s Cupboard to research the impact of the Crestmont community garden on food insecurity in that neighborhood. She found that the garden’s role in promoting food security came not from the food it provided but from the sense of community that it promoted. People who have strong social-support networks in their neighborhoods are much less likely to be food insecure than people who don’t.

The biggest obstacle to overcoming food insecurity is, ultimately, “the isolation and alienation that happens when you’re experiencing poverty,” Solomon says. “Someone who’s struggling who can ask, ‘Hey, can I eat dinner with you?’ will, of course, have a higher rate of food security than someone who feels like, ‘Okay, I’m out of food, and there’s nothing I can do about it.’”

Community matters, Estrada says, but visibility matters, too. She’s received a lot of help from people — including some she doesn’t know well — and since she began struggling financially, she’s taken to posting periodic updates on Facebook about how she’s doing. “It’s almost like the price I pay for asking for help is that now I tell you where I am in my life. It’s full disclosure, you know?”

Some people have been uncomfortable with her openness. She was once cautioned at work that she shouldn’t make any references to her financial difficulties because it might make her seem unprofessional. However, she knows many people appreciate her social media updates and some have even learned from them, and that’s been gratifying.

“One of my friends … told me it had made her uncomfortable at first,” Estrada says. “But later, she said she realized it was brave.”

Sarah Gordon is working on part 2, which focuses on food insecurity among children and seniors. Subscribe here for free to get email notifications when new stories are published.