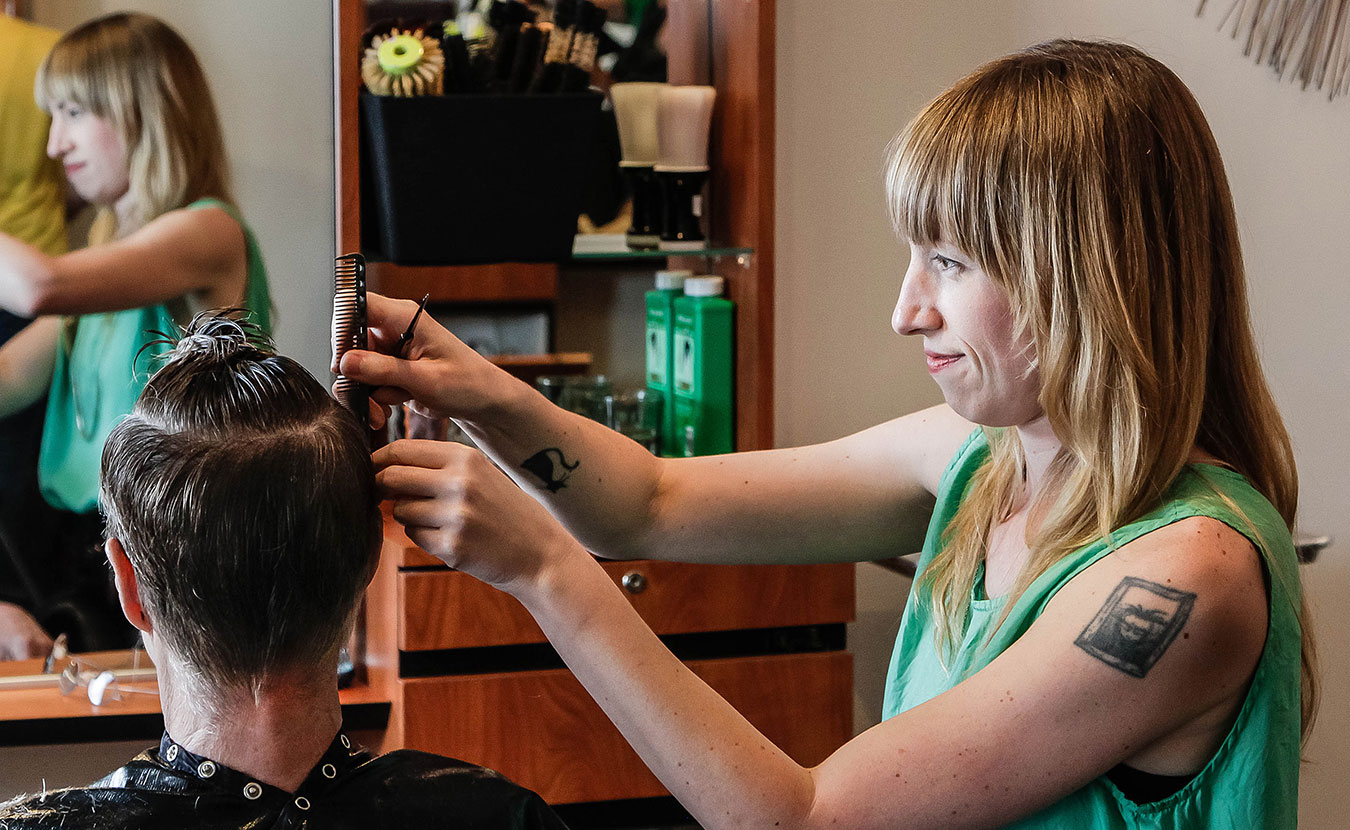 Cathleen Paquet, a hairstylist at Hairstream Studio, styles a client's hair. She says this trade allows her "to connect with other people really deeply." | Photo by Mark Anthony Kathurima

When you’re tallying up your list of allies and trusted confidants, your hairstylist’s name might not appear up top on the roster — or it might not even appear at all. But, for many, the client/hairstylist relationship is a bond to be treasured. Hairstylists can become, at times, the keepers of secrets and the preservers of sanity.

The client/hairstylist relationship has been around for centuries, if not millennia. Legros de Rumigny was appointed as the first official hairdresser of the French court in the 1760s, establishing hairdressing as a bona fide profession. But Léonard Autié, known as Monsieur Léonard, showed the full potential of the relationship between client and hairstylist when he won the favor of the newly ascended dauphine, Marie Antoinette in 1772, who was eager to embrace the high-fashion traditions of Paris.

For his queen and members of the wealthy Paris elite, Monsieur Léonard developed elaborate, towering hairstyles, adorned with feathers, figurines, and other finery, encapsulating the extreme opulence and ostentation displayed by the era’s aristocrats — which incensed traditionalists and commoners. During the French Revolution, Léonard fled the country hours before he was to be arrested for his association with the aristocrats. As his former clients met the guillotine, Monsieur Léonard escaped the political turbulence — heading first to Germany and later to Russia where he plied his trade as a hairstylist for Russian nobles — and returned to Paris when Louis XVIII was restored to the throne in 1814. While it’s not likely that contemporary hairstylists will ever be called upon to escape their homeland because of their client lists, there is no doubt that cosmetologists and their patrons continue to form strong bonds.

Mira Salon and Spa owner Heather Singleton has styled hair for 22 years; in that time, she’s nursed her clients through “everything,” she says. “Divorce. Cancer. Mental illness. Someone having Alzheimer’s. We get to experience people through pregnancy, having babies. You just become a part of the family, in a sense.”

“I would call it a friendship,” says Jean Robinson, a client who has been with Singleton since her early days as a hairstylist. “It’s not that we go out and socialize, but she probably knows more about my worries, my high points, my family, my issues, and my joys than anyone else. We have been through a lot together, from her own personal tragedies and triumphs — and mine.”

But before stylists become privy to their clients’ lives, before they become the witness to the everything and the all, they must start at the beginning: in hair school. Ann Georgescu, a stylist at The Foxhole, attended Aveda Fredric’s Institute on the north side of Indianapolis after she got her master’s in journalism. Going to hair school was a chance to pick up a trade, she says — something creative she could do full or part time as she weighed her options in journalism. As she builds her appointment book at The Foxhole, she considers the advice of her aunt.

“She’s 78 and she still does hair three days a week,” Georgescu says. “Right after I got out of (hair) school, she said, ‘You don’t have to be a good hairdresser to do well. As long as they like you, that’s all that matters.’”

Hairstyling can be a balancing act, especially for a novice stylist. One must be a quick study, remembering color formulas and proper angles for a cut, while also learning how individual locks will react to styling implements, cutting tools, and chemicals. And then there’s the banter.

“You have to ask questions,” Georgescu says. “You have to listen. You have to be empathetic. You have to be able to relate to them, not overshare your own personal life with them. You’re putting yourself in someone’s life. You have to draw out their story, whether it’s what they do for a living or what their hair does for them.”

Those deep bonds might spring from a tender emotional spot, Singleton says.

“When people come into this atmosphere, you’re talking about how they look,” she says. “That is a really vulnerable place for people to be, and that’s such a precious experience between two people — to be vulnerable and then for the person you’re being vulnerable to, to not judge you, to understand and to listen and also advise.” There exists, at times, a generalized disdain for hairstylists en masse. Despite the good deeds an individual hairstylist is capable of, the industry sometimes has a negative reputation: that it’s full of superficial, melodramatic airheads. “I think other people think that we go into this trade because it was kind of the last stop, like I was too stupid for college,” says Hairstream Studio owner Cathleen Paquet. “But it is a really good trade, and it does allow you to connect with other people really deeply. There are reasons why smart, educated people would choose this profession.”

When Paquet finished at the Hair Arts Academy (now Tricoci University of Beauty Culture) in Bloomington, she didn’t shave her legs or her armpits and she had a mohawk. In her late 20s, hailing from a life of rock ’n’ roll and various jobs, she was a relative newcomer to the beauty industry. Paquet was hoping to carve out a corner for herself in a looks-obsessed industry.

“Initially, I was skeptical that I would find a niche for myself,” she says. “I was a punk. I’ve got tattoos.”

But her niche did come, she says, and it was largely from referrals. And sometimes there were fortuitous walk-ins. Nowana Schroeder, a now-retired Indiana University research associate, had lost her longtime stylist. She cycled through a couple of others who were, she says, just fine, but seeing them required too much driving time. Mira, where Paquet was working at the time, was right by Schroeder’s office, so she ducked in and landed in Paquet’s chair. The two hit it off. “Through conversation, we found we had a lot in common, about how we view the world, what we value and the kind of people we choose to be around,” Schroeder recalls.

When Paquet decided to move her practice to the salon she would eventually own, Hairstream, Schroeder made sure she was the first on the books at the new digs. Schroeder, who was widowed 12 years ago, doesn’t have much physical contact on a day-to-day basis, short of a trip to her massage therapist, a physical examination at the doctor, or the odd hug here and there. As the days slip closer to her next appointment, she can’t wait. “It’s the highlight of my day,” she says.

Schroeder is particularly empathetic when it comes to hairstylists. Her sister, Wynema Callahan, has been doing hair since the 1960s in their hometown of Salem, Indiana. Schroeder says Wynema has been known to wake up in the dark hours of the morning to braid girls’ hair for cheerleading tryouts.

Like physicians and massage therapists, licensed cosmetologists are legally allowed to touch people without first donning protective gloves. This skin-to-skin contact is becoming increasingly rare in the modern world.

“It’s a very intimate thing if you think about it,” Schroeder says. “Somebody washing your hair and massaging your head and really trying to make your day is a very personal thing.”

Stylists will see their clients through major life events. When Robinson’s son was married, Singleton styled both her hair and the bride’s. Schroeder’s sister packs up her tools to visit her clients at their nursing homes. With increasing frequency, Wynema takes her kit to the funeral home to style her clients’ hair one last time. “She said, ‘It was really hard the first couple of times I did it,’” Schroeder recalls. “But it’s so important to the family that their mother looks the way she always looked.”

In January, Singleton, who bought Mira roughly 14 years ago, stepped out from behind her chair to focus on the salon’s business side and to craft a work-life balance for herself. She announced her exit from hairstyling with a brief email, sent with the subject line “Dear Beloved Clients”:

“I want to share how honored I have felt being your hairdresser and consultant on all things beauty. The mutual kindness, trust, and admiration we have shared overwhelms me with love and gratitude for you.”

Although she is months away from her spot behind the chair, she still introduces herself as a hairdresser first, business owner second. And she plans to continue introducing herself this way.

“What a hairdresser does on a day-to-day basis is way more remarkable and profound to a person,” she says. “From the minute they walk through the door, we’re making an impact.”

[Editor’s note: One of the sources in this story, Ann Georgescu, is a frequent contributor to Limestone Post.]

Jenny Elig is a writer, editor, erstwhile bass player, and forever cat enthusiast. She is licensed, by the state of Indiana, to cut and color hair. In her spare time, she knits dolls of pop culture icons such as Big Freedia. You can follow her on Instagram @catonaunicorn.
Mark Anthony Kathurima

Mark Anthony Kathurima of MarkOneStudios is an internationally traveled, award-winning wedding and portrait photographer, who started his photographic journey shooting people on film. He has photographed all manner of subjects, from fashion to commercial work for architects and designers. Mark’s current business focus is to get back to his roots, photographing people as well as weddings and events, but he loves to travel and still shoots a wide variety of subjects for his other photographic pursuits and interests.
Tagged
Comments

No Replies to "Hair Apparent: Stylists Give More Than Good Looks"