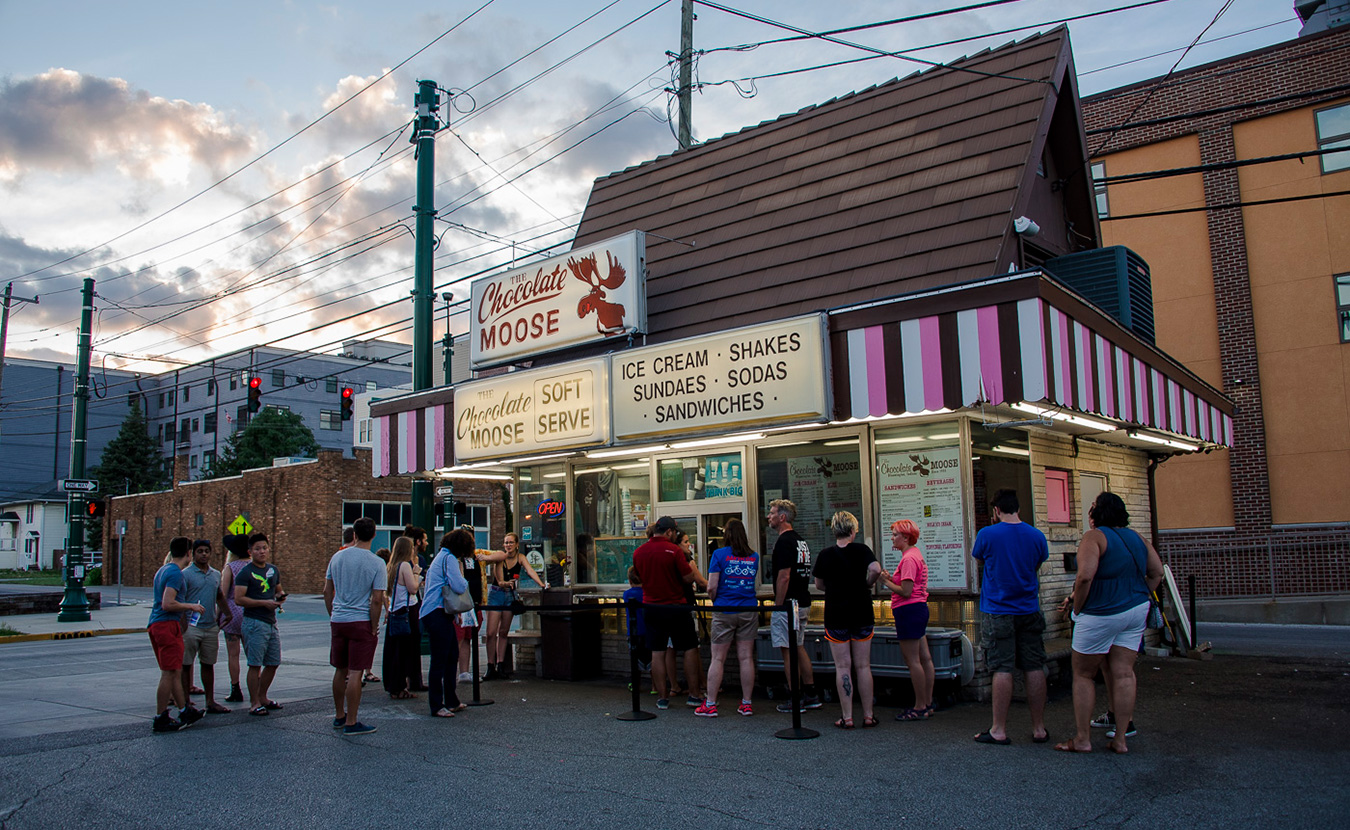 Many argue that The Chocolate Moose gives Bloomington a sense of place — that "unquantifiable, powerful idea" that a little building can help to make Bloomington feel like Bloomington. | Photo by Natasha Komoda

A famous thought experiment: If I have a bicycle, and I replace its component parts one by one over a long period of time until none of its original parts remain, when does it become a different bike from the one I started with?

How much can Bloomington change before it becomes fundamentally different from what it used to be?

Our town is a college town, and our transient population is part of what defines us. But the landscape is changing, too, in a way that many longtime residents find frustrating. Historic preservationist Duncan Campbell says it is important for people to be able to relate to their surroundings. | Photo by Natasha Komoda

New apartment complexes sprout like baby teeth on the edges of downtown, not unattractive but often misplaced and impermanent-feeling (and, I sometimes worry, just as susceptible to being taken out by a powerful door slam). The new downtown hotels are all chains, their architecture designed to accommodate planning and zoning requirements but still also heavily shaped by brand demands.

This photoset made the rounds of Bloomington social media about a year ago, chronicling the roads we’ve widened, the buildings we’ve demolished and built, and the big trees we’ve cut down and replaced with smaller ones — just between the years of 2007 and 2014.

The rapid property development of Bloomington’s last decade has disgruntled some longtime residents. That hum of displeasure erupted in May when the public became aware that The Chocolate Moose ice cream shop would be demolished to make space for new development on South Walnut. The business would remain, guaranteed a retail space on the ground floor of the new building, but people didn’t care about that. The quaint gabled roof, the goofy cartoon sign, the long outdoor lines through the parking lot — these were the things that the community wanted to protect.

Ice cream was never really the point. The experience, the sense of place — that’s what matters. The Bloomington landscape has changed dramatically over the past couple of years due to new student apartments popping up around town. | Photo by Natasha Komoda

Sense of place, he says, is absolutely the point of preservation and an understandable reason to be wary of the speed of new property development in Bloomington. Bloomington residents’ displeasure erupted when they learned of the plan to demolish The Chocolate Moose. | Photo by Natasha Komoda

“People need to be in a place that they have reference to, that they have a context for. It’s important to human existence that you be able to relate to your surroundings,” Campbell says. “What’s the point of spending your childhood on the family farm if the end result of that is that you don’t have anything to remember it by?”

Historic preservation commissions are responsible for using federal laws to measure the public value of a structure against its private use.

Bloomington has registered a number of neighborhoods as historic districts in the past decade, mostly west and south of downtown, to prevent developers from knocking down homes there and replacing them with something different.

Campbell explains that McDoel Gardens, for example, was listed, in part, to prevent IU Health Bloomington Hospital from buying up more of the neighborhood’s old single-family homes and tearing them down to make space for its expanding campus.

Maple Heights was registered because new arrivals in town — often, retirees who went to college here — were beginning to buy clusters of adjacent properties there and tearing down the old, but relatively affordable, homes to replace with much larger houses out of sync with their surroundings.

Measures like this, which are intended to help Bloomington’s neighborhoods maintain their character, are among the few pragmatic resources that community members have to influence the evolution of the community landscape. Heather VanNess is a property manager for Abodes, a locally based property development and management company. Abodes is best known for its large residential rental communities on the east side of town, but it also owns historic properties downtown, including several buildings on the east and west sides of the Monroe County Courthouse square. They’re not the only Bloomington company to invest in historic buildings: CFC Properties, Inc. maintains much of the square, and Bill and Gayle Cook have invested heavily in Bloomington’s historic buildings.

VanNess is quick to point out that Abodes has not built or bought any new property since 2010, when they acquired the old Smith-Holden Music building on West Kirkwood near the B-Line Trail. (As an aside: They had hoped to restore, not destroy, the old music mural on that building, but the decision was ultimately not theirs to make.) They’re not in the market to expand right now, either. But she also asserts that their historic downtown apartments are much more difficult to fill now than they were when she started working at Abodes nine years ago. Heather VanNess, a property manager for Abodes, says historic downtown apartments used to be some of the “coolest options,” but not anymore. | Photo by Natasha Komoda

“We used to sell out downtown before Christmas for the following [academic] year,” she says. “And now [mid-June], I still have one left. That would have been unheard of seven years ago.”

The downtown rental market is overwhelmingly dominated by students, VanNess says. And most of those students — especially those from out of town — are drawn to the sleek new appliances and modern feel of the newly constructed apartment complexes, probably because they’re similar to what those students could find, or might not even be able to afford, in their home cities. Old units with unique floor plans and period fixtures don’t hold the same appeal that they did even a few years ago.

VanNess says that Abodes prefers to work with and renovate existing buildings rather than to build new ones from scratch, which aligns with the company’s green philosophy. But, she says, if they were to decide to expand again in the future, the challenges of renting historic units would have to impact their decisions about how to go about growing their company.

So the changing landscape is a response to market forces, with developers building the kinds of properties their prospective tenants prefer. It’s the job of people like Duncan Campbell and the area’s historic preservation commissions to make sure this doesn’t happen at the expense of the buildings that make Bloomington feel like home to those of us who live here for longer than the duration of a bachelor’s degree.

Which takes us back to The Chocolate Moose, an icon of the Bloomington cultural and architectural landscape. It will, unfortunately, be demolished. Campbell explains there was nothing the preservation commission could have done about it because the demolition permit was secured before anyone petitioned to have the building listed. But even if that hadn’t been the case, the Moose might have been difficult to protect. It’s not a strong candidate on the basis of architecture. That familiar roof, for example, is not of historic significance because it is not part of the original structure — it was added because the original flat roof was leaking. The original building, without the new roof, may have been a candidate. Change is coming to The Chocolate Moose — a sign for the new apartments is already in place. | Limestone Post

The most likely criterion for listing the Moose would have been its contribution to place — the unquantifiable, powerful idea that the little building helps to make Bloomington feel like Bloomington.

Sense of place does have an economic value. It drives residents to remain in a community and investors to develop businesses that grow the local economy.

Sense of place makes that metaphorical bicycle feel like the same bike, even when the saddle and wheels have been replaced.

About those old, downtown buildings, VanNess summarizes the situation simply: “They used to be one of the coolest options. Things have changed.”