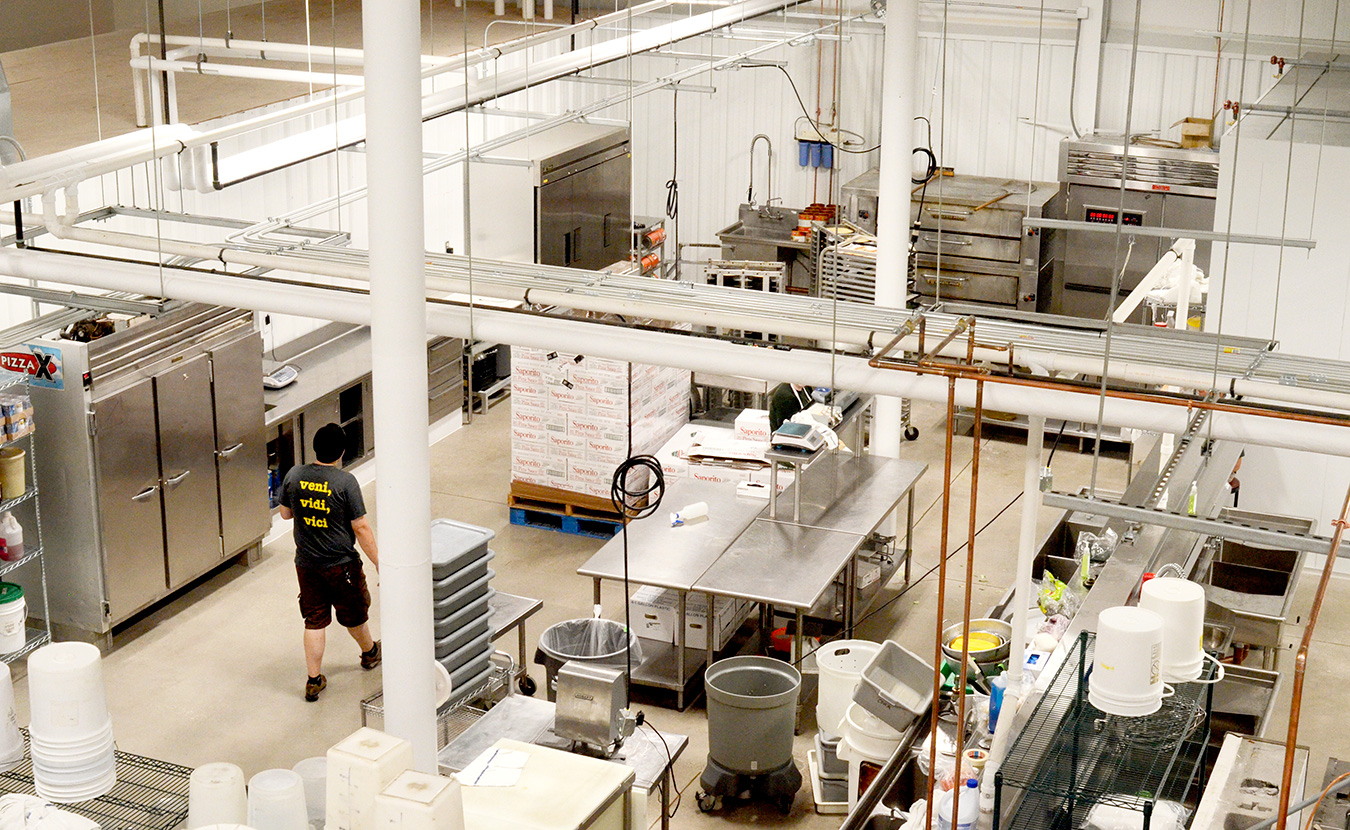 One World Enterprises' commissary has moved to a new location, bringing many members of their KitchenShare program with them. Co-founder and owner Jeff Mease describes this food and beverage business collaboration as “the antithesis of the chain model." | Photo by Lynae Sowinski

“There’s a new business model in place right now that people can’t even see yet,” says Jeff Mease, co-founder and owner of One World Enterprises and its commissary kitchen, which houses a collaborative program called KitchenShare. By allowing startup businesses to use One World’s commissary, Mease helps entrepreneurs explore their ideas and passions, which they hope will lead to opening their own storefronts. Jeff Mease, co-founder and owner of One World, says he is “fascinated and passionate about localism.” | Photo courtesy of Blueline Media

Mease knows that when a new business opens, there is hardly any time to ask how much money is being lost. “We are offering a safety route to the new business model with One World,” he says. Calling this shared arrangement “the antithesis of the chain model,” Mease says he’s “fascinated and passionate about localism.” The new space has multiple kitchens and four bays that are rented out to local food and beverage businesses. | Photo by Lynae Sowinski

One World purchased the commissary’s new space in December and officially started production in mid-June. One World Commissary and KitchenShare General Manager Jay Burton says One World production stopped for only 24 hours while they moved the entire kitchen — ovens, mixers, and all — from the old location to the new. Located on the northwest side of Bloomington in the old Textillery Weavers warehouse off of the 45/46 Bypass, the space was built out to suit the needs of two of One World’s primary businesses — Pizza X and Lennie’s. But the kitchens and bays will also be used by a dozen local food and beverage ventures that would normally be seen as One World’s competitors.

“What’s so bad about competition anyway?” Mease says. “When you’re teaching what you’re doing, you’re making that organization that much better.”

In addition to leasing kitchens and four kitchen bays in the new space (which is still being built out to suit the variety of business’ needs) to local businesses in food and beverage production, One World is giving access to amenities needed to get started, including the use of its grease interceptor. Affording and accessing a grease interceptor, which is required by law, is one of many roadblocks in starting out in food production.

“Rather than expand my own restaurants or operations, I’d like to help someone else open their own thing [and] help them through our shared experience,” Mease says. “We want people to sing their own song.” Tracy Gates, left, and Ricky Wade of UGo Bars on day two of building out their new space. | Courtesy photo

Mease started the commissary six and a half years ago because of what he calls his “lack of passion for the cookie-cutter model,” and he has slowly added businesses to the commissary’s lineup since then. Currently One World KitchenShare is the production home to Uel Zing Coffee, UGo Bars, Zeitgeist Creamery, Lucky Guy Bakery, and The Big Cheeze, to name a few.

As in the original commissary, use of the new larger kitchen stations will be rented on a first-come, first-served basis. Mease hopes he won’t have to turn anyone away now that they are located in a larger production facility.

“I love kitchens,” Mease says. “This is massive. I don’t know of a kitchen of this scale in the Midwest. … We can grow into this new space with our clients. I’m excited to see if we can fill it up.”

Not only is the commissary growing, but the businesses that use its kitchens are growing as well. Though they have yet to open a storefront, Mease says, UGo Bars has made one of the biggest leaps since they began in 2014.

“Jeff lets his employees run the businesses,” says Tracy Gates, co-founder of UGo Bars. “I hope to help my employees in the same way Jeff Mease has helped us. I like being part of the team. It’s fun to be helpful.”

Gates is most excited about the efficiency of the new space. Previously, UGo Bars produced at the commissary — which was located on North Rogers Street by Hoosier Crossfit — transported their snack bars to their office space on North Walnut near the courthouse square, then shipped and delivered to local businesses from there. The new commissary location will provide production and storage space and will allow for employees Ricky Wade and Kayla Cornwell to work “normal” hours — not their previous 2 p.m. start time. UGo Bars’ production and distribution, pictured here, were previously divided between multiple locations. Once renovations are complete, they will be able to consolidate everything into one location. | Photo by Jonna Mary Yost

“The framework, laying foundation, getting your hands dirty — most people can’t wait to outgrow that stage. That’s what we love,” says UGo Bars co-founder Rebecca Walter.

“It’s all in,” Mease says of starting a business. “It’s what you’ve got to do. Not just the big toe in the water.”

And that’s exactly what Gates and Walter have accomplished with UGo Bars.

“We didn’t start with any money,” Gates says.

The collaborative spirit of Bloomington’s business community has spurred the growth of the small bar company. Gates worked with Wade for nine years and with Cornwell for about five years at the Scholars Inn Bakehouse before UGo Bars took off. Gates is proud of Wade’s ability to get UGo’s waste down to about one percent of production.

“To have a great organization, you have to have great people,” Gates says. “Give them the tools and let them go. That’s why I work with people I really respect.”

Other businesses moving to the new kitchen feel similarly, and Mease has that same respect for them. With his own businesses on the ground and running, he is seeking to eventually move into a more educational side of food production to give smaller businesses the background and information they need to get a start.

“It’s all about knowledge capital,” Mease says. “In the food industry, there is a well-worn path of operation. We want to share that with upcoming businesses, to serve the staff [and] community and provide support for a more diverse and unique setting within Bloomington.”

Far from the wilds of Montana, where she grew up, Jonna Mary Yost has found herself living a Midwest life. Her passion for connecting through nature and energy is realized through her instruction of yoga classes at Know Yoga Know Peace as well as her continual outdoor adventuring. Jonna seeks to pull from the backwoods of Indiana what she found in her home state and impart that mana to those she encounters.
Lynae Sowinski