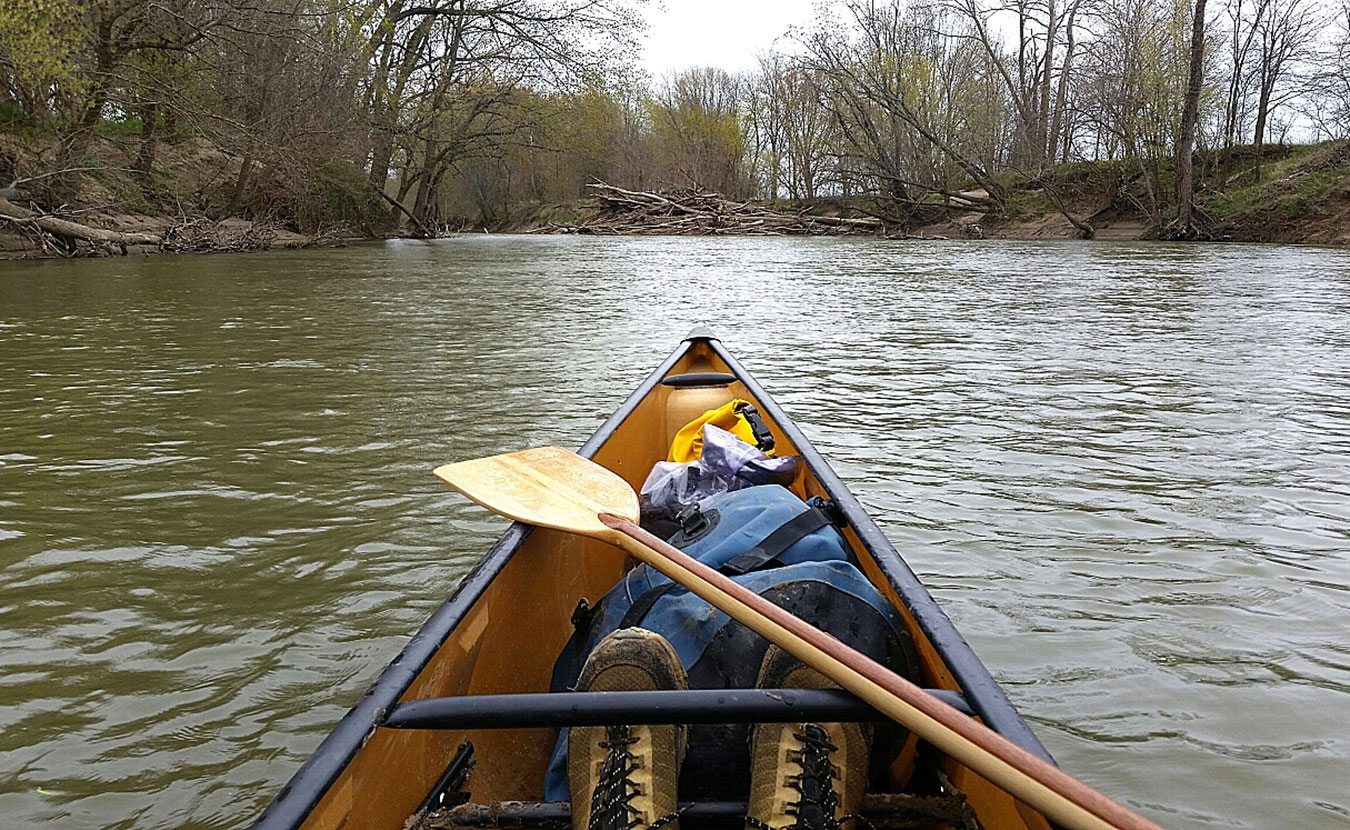 In southern Indiana, finding adventure is simple. Grab a canoe and paddle and make your way to the closest river or creek — in almost any season except the frozen depths of winter. Most of our water trails are flat and serene and make for great weekends for any level of paddler. The following is my list of the best paddle trips around.

The Blue River might be Indiana’s most appealing and accessible paddle trip — you don’t even need to bring your own boat! It is known as one of Indiana’s cleanest rivers and is one of only three Hoosier streams to have a river commission, which not only works to protect the river but also promotes recreation on it. A portion of the river is also considered by the state to be a “natural, scenic, and recreational river system,” meaning the water is clean and the views are some of the best around. The Blue River, pictured here, is great for a weekend paddling trip with the whole family. | Photo by Michael Waterford

There are two sections of the Blue River that are popular for paddling, each operated by well-managed liveries. My favorite section begins in Fredericksburg at the Old Mill Canoe livery. The 24-mile trip from Fredericksburg to Milltown is perfect for a weekend trip. The family operating the livery goes out of its way to take care of you, offering a variety of trips and everything from transportation, firewood delivery, camping, outfitting, food, and more. The entire family will enjoy the beautiful stone bluffs, and a few light rapids make things fun. From Milltown, you can get on the water just below the dam with Cave Country Canoe livery. Their 14-mile Lower River trip is loads of fun with a few more rapids and even more of that same great scenery.

This 40-mile paddle is great for those looking to improve their paddling skills and really put in some miles on the river. Henderson Ford Bridge is about four and a half miles north of Martinsville, and though the locals often mistake the public access point as a trash dump, it drops you in the water at a nice wide spot in the river. Bending slowly through Martinsville, the river passes factories, farmland, and shanty river-folk housing — then on to the only portage of the paddle. You’ll have to portage over an old dam, but it is only about five feet high, and, when the water is low, it’s easy to lower your boat down over the lead of the dam. When the water is high, though, one must haul their craft about 20 meters or so around the right side of the bank.

After the dam, the river narrows, and, as summer turns to fall, many pebbled beaches are exposed, so finding the perfect camping spot is easy. But as spring turns into summer, the river bends get tighter and quicker and partially submerged trees force paddlers to navigate quickly. Some rivers in Indiana are great for camping overnight along the banks. | Photo by Michael Waterford

I know what you’re thinking: “But, Michael, isn’t the river polluted and littered to the gills?” Short answer: Yes. But that doesn’t mean it’s not fun, and recreational paddlers shouldn’t write it off! In fact, this portion of White River may be my favorite route to paddle. It’s easily accessible, passes by beautiful McCormick’s Creek State Park, and it’s quiet. I have never seen another group of paddlers on the river. But be beware, dear paddler — when those skinny fishermen on the bank offer you “ice,” keep paddling — they aren’t talking about ice for the cooler.

Maybe it’s my townie roots, but Beanblossom Creek speaks to me of Bloomington like a cyclist wearing a “Cutters” T-shirt on the way to a basketball game. It’s quiet, clean, and close. The creek doesn’t have any public put-ins (so you’ll have to begin your trip at Lake Lemon), and you may have to portage around a logjam or two, but taking the time to explore this little treasure is worth a little organizing. As you paddle, you’ll notice how the creek cuts deep into the earth, creating mud walls along the banks, which cause the tall trees to lean inward, completely covering the creek. The surrounding wall of vegetation and wildlife keeps it peaceful even when paddling near roads and towns. You’ll have fun slipping by unnoticed while Hoosiers go about their daily lives all around you. Paddling can be enjoyed almost any time of year. | Photo by Michael Waterford

The easiest way to enjoy this paddle trip would be to jump on at Lake Lemon and have a friend or outfitter pick you up at the Old State Road 37 crossing near the tiny town of Dolan at East Robinson Road. This gives you a full day of paddling, about 15 miles or so, and I doubt you’d see another soul on the creek. I’ve also continued paddling this creek westward, where it slips into the White River, and pulled out at the intersection of North Texas Ridge Road and North County Line Road East near Gosport — this portion would make it an overnighter. Either way, exploring Lake Lemon by canoe or kayak is as Bloomington as a Hoosier playing Stardust on Rooftop.

Most paddlers around here haven’t even heard of it — and if they have, they have often mistaken it for another river by the same name in northern Indiana. But west of Spencer is a surprisingly clean and rarely paddled little river flowing southward to join the west fork of the White River. My friends and I have made this a staple in our summer routine. We normally put in under the bridge at the corner of East River Road and South County Road 200 outside of Clay City. Thirty-four miles and one overnight later, we take out at the White River public access point in Worthington. The only negative about paddling here is that the fairly steep banks are made mostly of mud and sand, thereby making campsites a bit harder to get to. Other than that, it’s fun at a steady four miles per hour for all ages. Most people know of the Eel River in northern Indiana, but there is another Eel River near Clay City that connects with the White River. | Photo by Michael Waterford

Driving around Brookville midsummer, a person wouldn’t be far off to assume that life there revolves around floating down Whitewater River. Seemingly every car, truck, and shuttling busload of paddlers is either on their way to or from its muddy banks. There are two major outfitters in Brookville that rent out hundreds of kayaks, canoes, and inner tubes for people of all ages to enjoy. I brought my own boat but used the river access of Whitewater Canoe Rental. Upon arrival, I was shocked at the field full of parked cars, but that was nothing compared to the flood of floaters and partiers lazily making their way downstream. If a quiet paddle is what you crave, you’ll have to hit up this river in late fall or early spring. When the weather is hot, the liveries move fast to keep up with demand. It’s surprisingly cheap to get on the river, and each rental comes with shuttle service. Don’t let the name Whitewater River fool you, though. Water is released from the reservoir at nearby Brookville Lake, thereby leaving it deprived of its namesake — but otherwise perfect for recreation, and, from the looks of it, serious partying. If you are looking for a river to party on while paddling, Waterford suggests the Whitewater River. | Photo by Michael Waterford

There are hundreds of miles of navigable waterways in Indiana, and each one changes day by day and season to season. So there is always something new to explore in the rivers and streams of southern Indiana.

Now, go see for yourself.

Editor’s Note: Liveries operate seasonally and close when the water level is too high or too low. Call ahead, especially in the spring and fall, to make sure they are open.

No Replies to "The Best Southern Indiana Waterways for Paddling Fun"