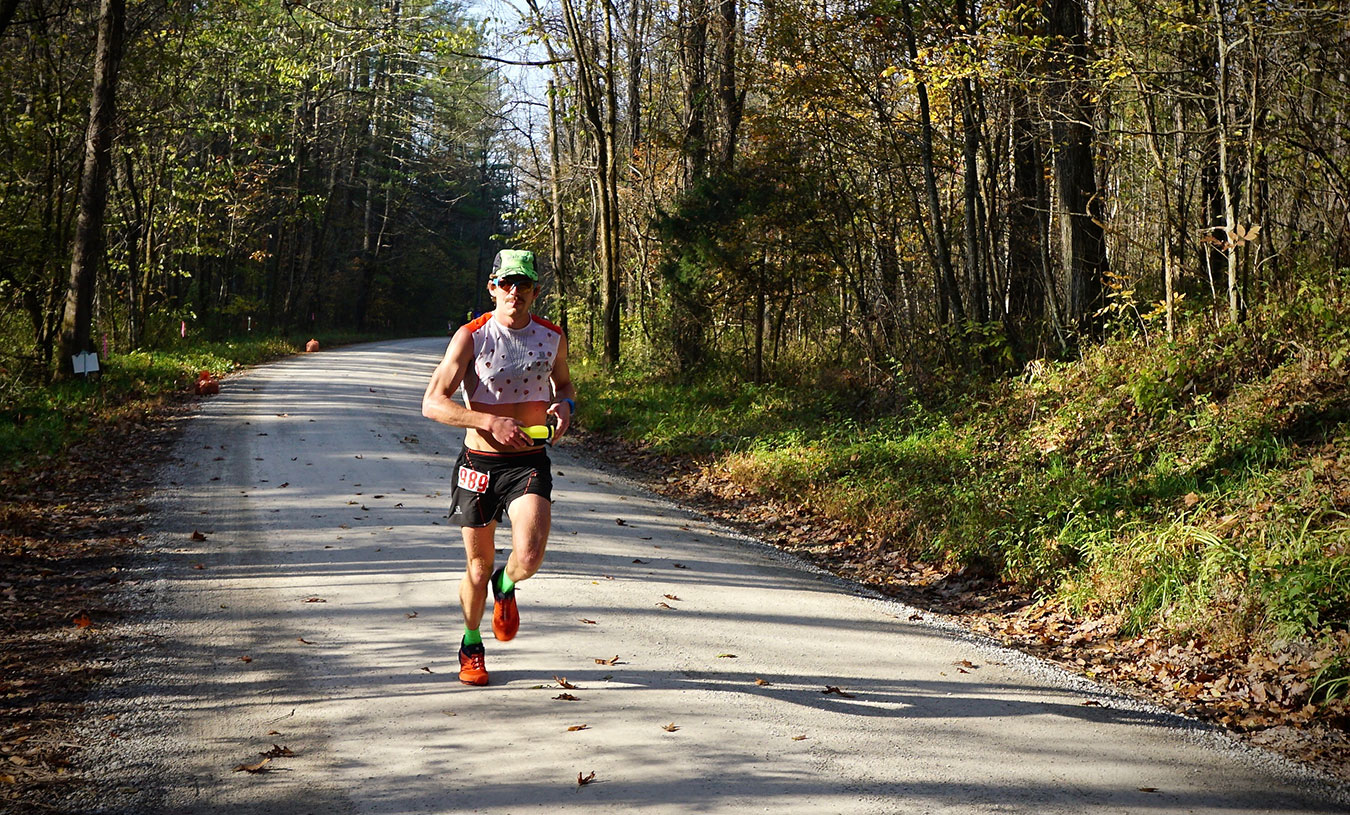 Saturday, October 29, was a hot day for the 14th annual Tecumseh Trail Marathon, an off-road race through Morgan-Monroe and Yellowwood state forests. But the heat — topping out at 80 degrees — did not seem to affect the overall men’s winner, Matt Flaherty of Bloomington. He beat the course record (by six seconds!) with a blistering speed of 2:57:54. A professional runner and coach, Flaherty will be running as a member of Team USA when it competes later this month in the International Association of Ultrarunners (IAU) 100K World Championships — that’s 62 miles — in Los Alcàzares, Spain.

Considering this was the first trail marathon Flaherty has ever run, he was “a little surprised to get the record,” he wrote in an email. “Most of the trail races I compete in are ultra-marathon distance races, typically in the 50- to 100-kilometer range. I was happy with my time on the course, though. For comparison, my personal best at the marathon distance (on the road) is 2:21:20. So I ran 36 minutes slower here, but on a trail course with around 3,500 feet of ascent and similar descent.

“Also,” he says, “I was coming off a short injury layoff — an IT [Iliotibial] band issue that forced me to miss any real training in late August and September. Still, I knew it would be close if I had a good day. I started the race aggressively, banked several minutes on record pace by midway, subsequently lost that cushion as I wilted in the heat, but held on to break the record by six seconds — a little close for a three-hour race!” Flaherty during the Tecumseh Marathon. | Photo by Alison Polley

The overall women’s winner of Tecumseh Marathon was 16-year-old Morgan Watkins from Indianapolis — with a time of 4:36:30. Flaherty spoke briefly with Morgan after the race. “She had just finished her high-school cross-country season for Herron High School,” Flaherty says. “Having not made it to the state championships (which were also Saturday), she decided to come race the Tecumseh Marathon. Pretty cool!”

In all, 182 runners competed, including people from all over Indiana and 36 from states as far away as New York, Florida, and Louisiana. The race was historically held in December until 2014, after bad weather forced the event to be rescheduled in January. Since then, it has been held in October.

Hosted by Hoosier Hikers Council and the trail running series Do INdiana Off-road (DINO), the Tecumseh Trail Marathon is named after the 42-mile hiking trail that starts in Morgan-Monroe State Forest. The course varies “from narrow forest trail to wide fire road, gravel, dirt, and paved road,” according to dinoseries.com. Some hills reach 300 feet in elevation.

“Every trail race is unique and presents its own challenges, which is part of what makes trail running so fun,” Flaherty says. “Racing in the Rockies, for instance, has the challenge of altitude as well as long, sustained ascents and descents of 3,000 feet or more at a time. In the Midwest, we don’t have altitude or such sustained climbing, but we do have heat and humidity. And the trails can still be rooted and rocky, the footing obscured by leaves. The climbs, while not long, are steep and relentless. Finally, the Tecumseh Trail in particular has a lot of sharp twists and turns, making it hard to capitalize on downhill stretches. You can never fully blast a downhill, because you’re constantly having to turn.”

The contrast to running a road marathon can be drastic, Flaherty says. “A ‘hilly’ road marathon like the Boston Marathon only has about 600 feet of total elevation gain, contrasted with the 3,500 feet of the Tecumseh course. In a road marathon, sound pacing strategy means running a pretty steady pace the whole time. But on a hilly trail course, a steady pace is impossible, and even a steady effort isn’t the best strategy. The reason is that the downhills offer an opportunity to recover with very little effort; fast downhill running is more about technical expertise than aerobic fitness. Thus, you can push yourself a little harder on the uphills while recovering on the downhills. This back-and-forth type of effort is sometimes known as ‘färtlek,’ a Swedish term that means ‘speed play.’ It works well on hilly trails, but it’s not ideal on the relatively flat roads.”

On November 27, Flaherty will be competing in the IAU 100K World Championships for his third year in a row, representing Team USA. (He is writing an article for Limestone Post about the 100K World Championships. Check back in a couple of weeks.) “We won team gold in Doha, Qatar, in 2014,” he says, “though I unfortunately did not finish that race due to injury (I made it 46 miles). Last year, in Winschoten, Netherlands, we were the 4th place team, and I finished 2nd for Team USA and 24th place overall in 7:01:08.”