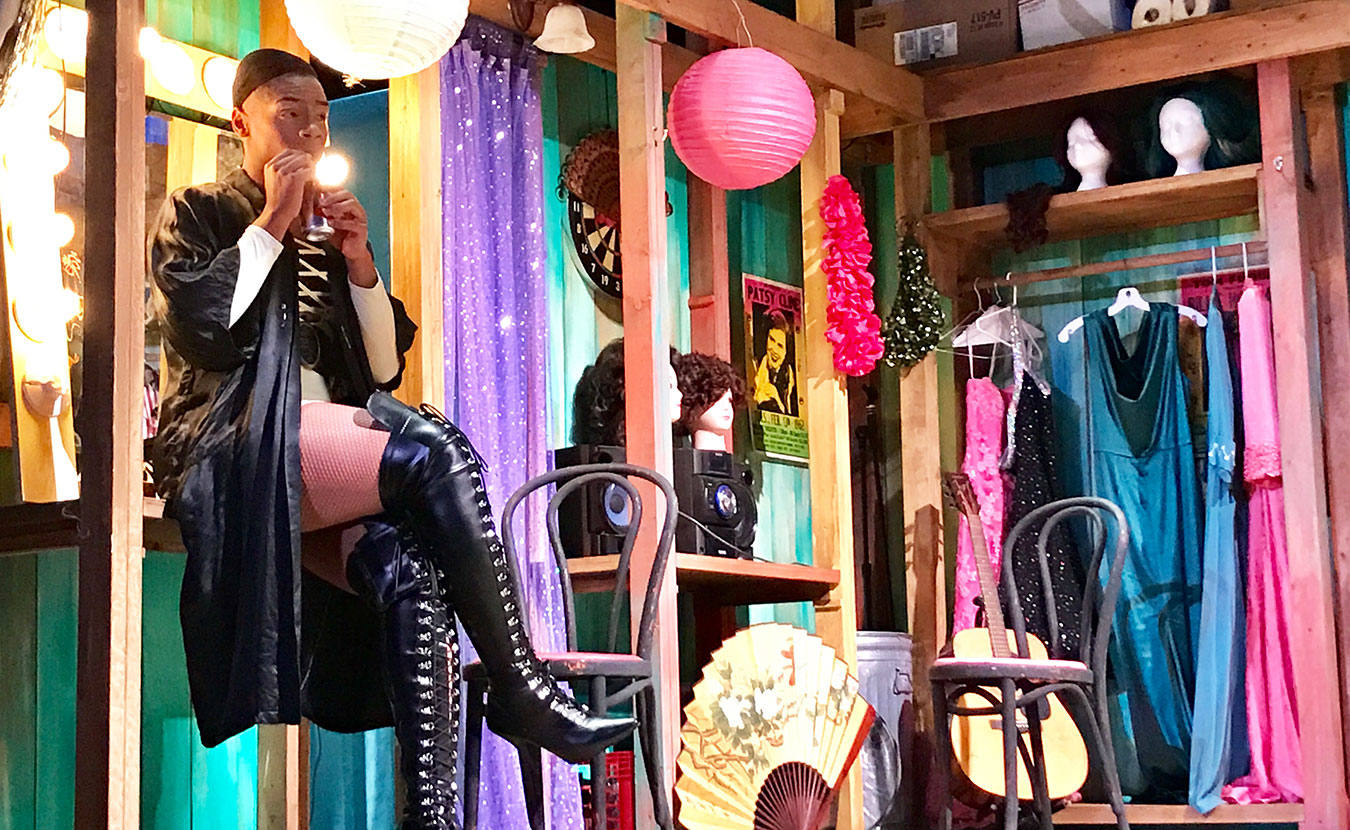 [Editor’s note: With such a vibrant theater scene as we have in Bloomington and the surrounding area, it is difficult to keep up with the productions, production companies, and theater news. It is also difficult to find a source who can keep fans of the theater informed and entertained about what’s happening. Limestone Post has found such a person in Jennifer Pacenza. Author of Bravo, Bloomington!, a blog dedicated to local performance, Jennifer begins her new theater column, Behind the Curtain, with this preview of Cardinal Stage Company’s production The Legend of Georgia McBride.]

If Shakespeare is correct (and who am I to argue with the Bard?) and plays do “hold a mirror up to nature,” then The Legend of Georgia McBride by Matthew Lopez is a shiny, pink dressing-room mirror encircled with shimmering lights, draped with fluffy feather boas, and peppered with sparkling glitz and glitter. The play is as funny, fierce, and fabulous as the drag community it celebrates.

As a huge fan of drag, I have been looking forward to this play ever since Cardinal Stage Company announced its season last spring. Being able to attend rehearsal, meet the cast, and interview Joanie Schultz (director) and Will Mobley (who plays Casey, the lead) has inspired spontaneous strutting and lip-syncing.

The Legend of Georgia McBride is a magical, larger-than-life tale of Casey, a struggling but talented Elvis impersonator at a failing bar in the small town of Panama City, Florida. In a last-ditch attempt to save the bar from bankruptcy, the owner, Eddie (played by Mike Price), calls on the assistance of drag queen extraordinaire Miss Tracy Mills (played by Aaron Holland) to turn his dying bar into a thriving drag club. Casey gets thrown into this new world of drag and discovers that not only is he quite good at performing in drag, but he also really likes it. Now, all he has to do is tell his wife, Jo (played by Melody Louisdhon), but he can’t seem to find the perfect time or the right words.

Audiences can expect a lively, music-filled comedy featuring big hair, glamorous dresses, and killer heels, yet the play is so much more than a fun-filled romp. It provides a window into the drag community with which most people have little experience. Drag is not just about putting on the clothes of a different gender. Drag transformation is about creating an illusion through dress and makeup, giving the illusion of a magical, effortless performance of comedy, dance, and lip-syncing. What we don’t see, according to Schultz, is “how hard these people work on their numbers and on their makeup.”

A few pairs of the “killer heels” worn during the show. | Courtesy photo

At rehearsal, I got a taste of the hard work that goes into drag as I watched Armand Fields, who plays Rexy, work for over an hour on choreography in what can only be described as the sexiest thigh-high boots I’ve ever seen. As he twirled and shimmied across the stage, his face registered his exhaustion, but he kept pushing himself until he got it right. After the final run-through of the whole number, he left the stage with a huge smile and a hobbled step as he half-joked about needing to get the feeling back in his feet. The audience members will not see this kind of work. Instead, they will just see Sexy Rexy work those boots until everyone begs for more.

“Drag,” as Mobley says, “transcends merely the performance element of it.” Drag is an art form, an attitude, a social critique, and a community. Drag even has its own language, according to Schultz, full of “sassy one-liners, self-deprecating humor, and [an overabundance of] shade.” Through all of this, drag acts like Hamlet’s “mirror up to nature” in that it reflects our culture’s problematic relationship with gender. Drag embodies our culture’s gender stereotypes in such a way that it calls attention to the constructed nature of gender itself. Drag forces us to see that gender is not inherent but performed, or as RuPaul would say, “You’re born naked, and the rest is drag.”

The Legend of Georgia McBride participates in that discussion by creating what Schultz calls an “allegorical story for our time.” The play forces us to examine “an old-school, 1950s idea” of gender that “controls us and controls the ways in which we cut ourselves off from those parts of ourselves” that do not fit those strict gender codes. When Casey creates his new drag persona of Georgia McBride, he is “able to be the best version of himself,” Mobley says. “He uncovers this part of himself that he wouldn’t have had he not put on a wig, a dress, and makeup and gone on stage in front of people.”

Like drag, Cardinal Stage’s production uses glitz and glam, charisma and comedy, sass and sexiness to challenge its audience to consider the permeability of gender and sexuality. It is sure to spark questions like “What would your drag name be?” “What would your drag persona be like?” and “Don’t you think you’d look amazing in those thigh-high boots?” Cardinal’s Legend of Georgia McBride is the perfect combination of silly fun and intellectual engagement, and I know that I look forward to experiencing it in all its fierceness on opening night!

No Replies to "Behind the Curtain: A Drag Legend Is Born in ‘Georgia McBride’"