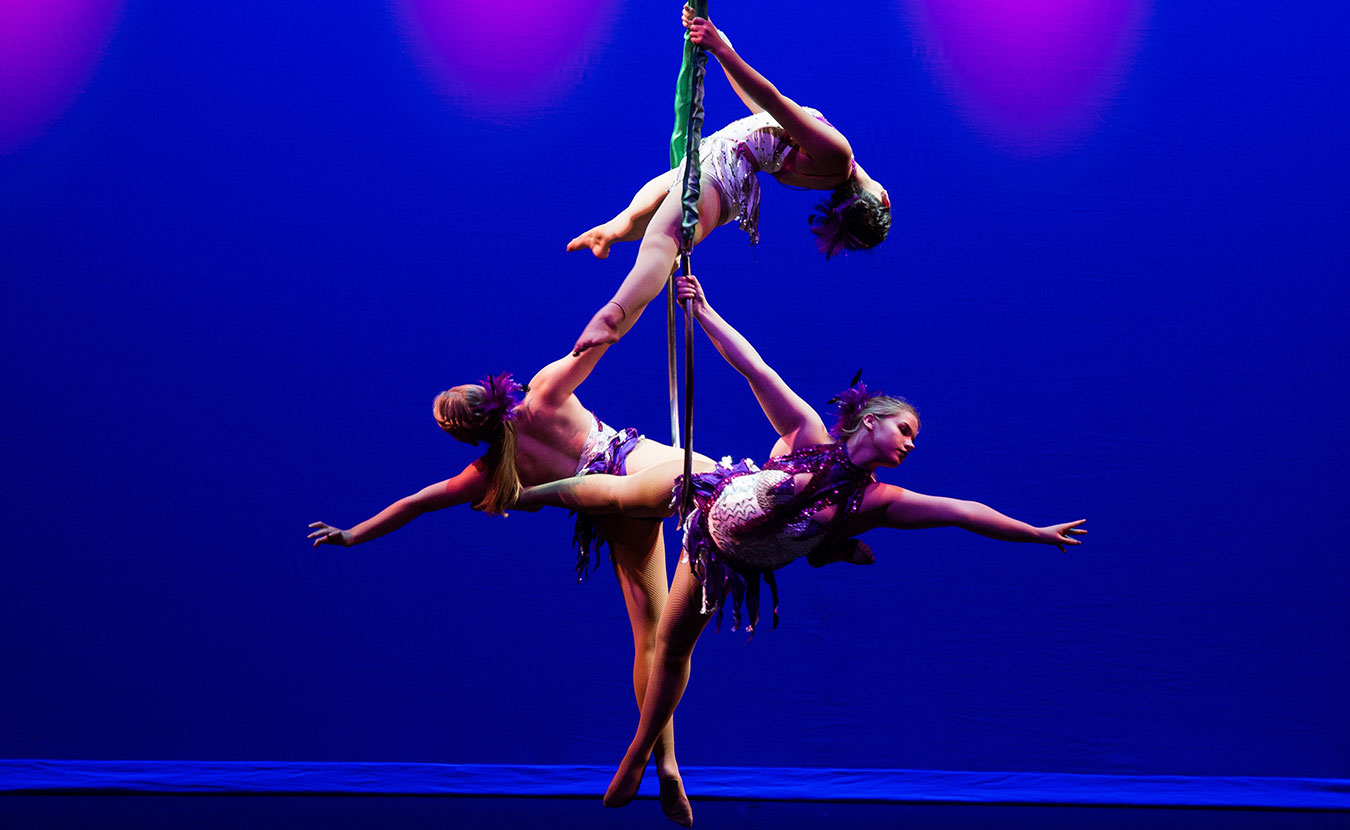 The graceful and mesmerizing aerial acrobats of AsaBela WINGS Aerial Academy will perform in both the matinée and evening Va-Va-Va-Vaudeville shows on August 19. | Photo by Chris Rall

Jugglers, dancers, comedians, aerial acrobats, burlesque performers, live musicians, and even a trained parrot named Charlie! This Saturday, August 19, the Dance Network Alliance of Bloomington, in conjunction with the Arts Startup Program, brings together all this and so much more in Va-Va-Va-Vaudeville, a variety show featuring an extravagant array of Bloomington talent.

Va-Va-Va-Vaudeville is one of the first artistic presentations created through the Buskirk-Chumley Theater’s Arts Startup Program. In 2016, BCT Management, the nonprofit organization that operates Buskirk-Chumley, hosted its first Arts Startup Workshop (the second was held in March 2017). According to Executive Director Danielle McClelland (who prefers ze/hir pronouns), people often come up and tell hir the performance “ideas they hold in their heart.” Arts Startup is a formal program that acts as an “arts event incubator,” says McClelland, where new ideas for artistic events are encouraged and developed by providing “some expertise, some consultation, and some actual subsidy.”

BCT Management pairs prospective performance creators with experts from local, successful performance organizations like Bloomington Playwrights Project, Cardinal Stage Company, The Comedy Attic, The Bishop, and the Lotus World Music and Arts Festival. The experts share their knowledge, assist the groups in brainstorming a preliminary event proposal, and judge the feasibility of the proposals.

Va-Va-Va-Vaudeville (as well as Shimmy Con which occurred in July of this year) is the direct result of that first Arts Startup Program. The idea for the show was dreamed up by Paula Chambers about four years ago. Chambers, the founder of the Dance Network Alliance and fearless ringleader of The Hudsucker Posse, wanted to create a show full of local movement artists — jugglers, dancers, acrobats, and the like.

While Chambers was not able to bring the idea to fruition at that time, she kept dreaming. Now, thanks to the Arts Startup Program and Joanne Shank, the current dance representative for the Arts Alliance of Greater Bloomington, her dream is becoming a reality. The vaudeville theme of the show was scripted by Tony Brewer, technical director of the show and head of The Writers Guild at Bloomington. The narrative not only organizes all the acts under one storyline of a traveling vaudeville show, but it also connects today’s talent with Bloomington’s own vaudeville past at the former Princess Theatre, just north of the Square on Walnut.

Saturday afternoon there will be a more kid-friendly matinée hosted by Joseph Ermey and featuring youth performers like pianist Ross Martinie Eiler, musicians Anna Wrasse and Phillip Hammond, performers from The Dance Center, and the clever canines and trainers of Mad 4 My Dog. After the matinée, children and adults alike can participate in interactive events like learning to hula hoop or being wowed by Keplinger’s magic.

With the sheer number and variety of acts in the show, Va-Va-Va-Vaudeville truly is a celebration of Bloomington’s talent, creativity, and hard work. “This is a juggernaut of a project,” exclaims Chambers. “I somewhat feel like we have bitten off a lot, but the level of professionalism of all the directors that are involved is very high.” Paula Chambers, founder of the Dance Network Alliance and fearless ringleader of The Hudsucker Posse, will perform her show “Living Doll” for the last time at Va-Va-Va-Vaudeville. | Photo courtesy of Corwin Deckard Photography

“When people do come to the show,” Chambers explains, “what they are going to see is pretty much for the first time all of these people in the same room together. I want to make sure people realize when they see the show, although it appears that we are one troupe, all of these people have come and have had one rehearsal together.”

This level of professionalism and organization is impressive. Creating a fully realized show with an overarching narrative out of so many disparate pieces takes an incredible amount of organization and cooperation.

Nowhere else can you see all of these great performers and groups in one show. Catch  Bloomington on display at Va-Va-Va-Vaudeville on Saturday, August 19. To buy tickets or for more information, visit the BCT Box Office webpage.