Behind the Curtain: The Ways the Stage Teaches 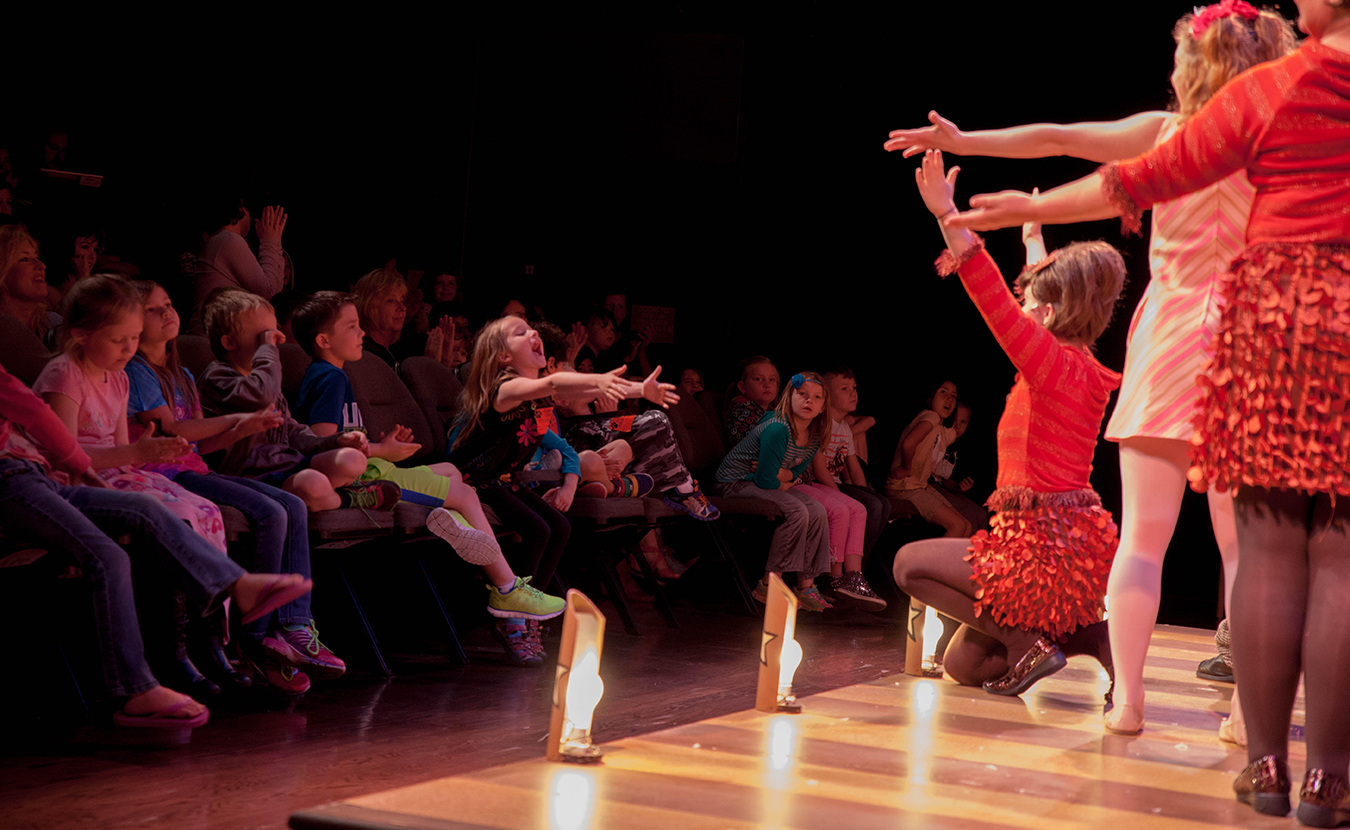 Just as theater teaches us about ourselves and about the world we live in, local youth theater programs help students (of all ages) learn literacy, creativity, self-determination, critical-thinking skills, and empathy, writes Jennifer Pacenza. | Photo courtesy of Cardinal Stage Company

Want to help your child learn literacy, creativity, self-determination, critical-thinking skills, and empathy? Take them to the theater. Theater is a fun, entertaining learning experience that not only helps children develop historical, literary, and cultural-literacy skills but also inspires tolerance and understanding.

Why theater? What is unique about this art form that we as parents, educators, and art lovers should support and recommend its inclusion in the classroom? Gustave Weltsek, assistant professor of arts education at Indiana University, says, “What is so brilliant about theater is the complex multi-literate experience. It’s live; it’s visceral. You have the visual and the audible. You have smells. You can read the play. Analyzing theater allows our youth to both participate and critically evaluate in complex ways.”

Young people can experience theater in two main ways: observing and participating. Both teach in unique ways. Cardinal Stage Company offers youth programs that put young people in the audience. In partnership with IU Credit Union, Cardinal offers the Cardinal Education Initiative that includes Cardinal for Kids, a program that not only offers a selection of plays specifically geared for youth audiences but also works with local schools and libraries to introduce children to theater no matter their socioeconomic situation. 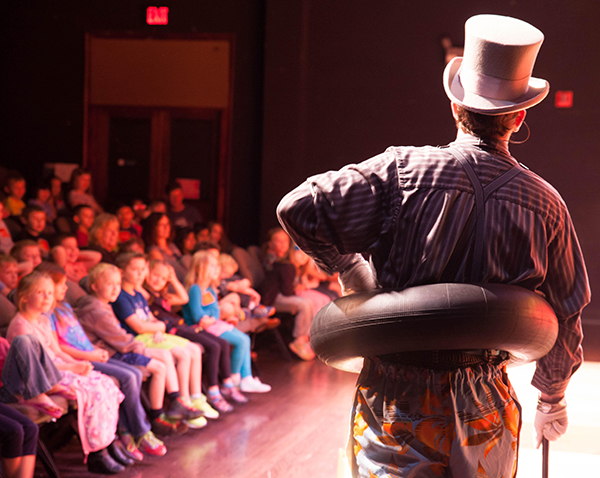 For their productions, Cardinal Stage creates lessons for students, with topics ranging from environmentalism to accepting difference to ethics. | Photo courtesy of Cardinal Stage

Now in its tenth year, Cardinal for Kids has partnerships with 18 schools and typically hosts anywhere from 12 to 18 special matinees per show for school groups. But it’s not enough to just present plays to kids and then send them on their way. For theater to be an effective learning tool, children need to learn how to interact with it.

So, as part of their youth theater programming, Cardinal partners with local teachers, librarians, and professors of education to create interactive instructional guides to enable teachers and students to utilize the theatrical experience more fully. As Weltsek explains, “The engagement that a teacher facilitates before and after the show encourages the students to actually go in and think critically about what is presented for them.”

For their productions, Cardinal has created lessons that range from environmentalism in The Adventures of Frog and Toad (spring 2015) to compassion and accepting difference in Beauty and the Beast (running December 13-30). With the added participation in Indiana University’s Themester, Cardinal’s education initiative has also reached high-school-aged students with plays like Inherit the Wind (fall 2009), All My Sons (fall 2011), and Frankenstein (fall 2017), which inspire lessons on topics like evolution, families in wartime, and science and ethics (respectively).

Along with exposing children to subject matter from a multitude of disciplines, going to the theater can inspire a more open and understanding citizenry. In a 2014 study, Jay Green, a professor from the University of Arkansas, found that attending live theater productions of Hamlet and A Christmas Carol — rather than just reading the books or watching movie versions — enhanced literary understanding of the plot, characters, and motivations, as well as increased tolerance and empathy among students for the characters and their situations. 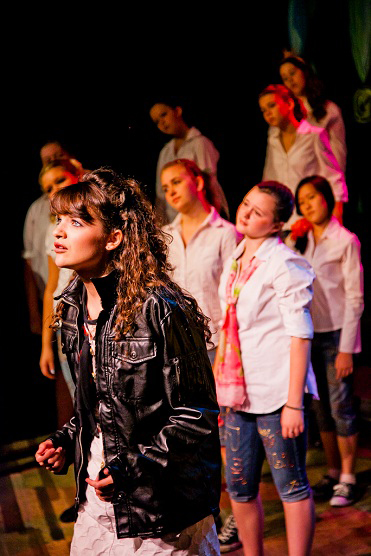 While watching and discussing theater teaches so much and inspires a love of performance arts, Weltsek wants children to do more than just watch, because magical things happen when they get a script in their hands.

The Ivy Tech-BPP Youth Education Program, also sponsored by IU Credit Union, allows students to create a show. As Chad Rabinovitz, producing artistic director of Bloomington Playwrights Project, explains, “Through BPP’s youth education programs, more than 13,000 students have written plays or performed on our stage. Our programs focus on the creation process, so students leave with the knowledge that they can create art and tell their story at any time with just an imagination by their side.”

BPP offers numerous summer camps that allow children from ages 5 to 16 to participate in many different aspects of theater, from introductory elements of acting to the creativity of playwriting to the humor of sketch comedy to fanciful musical performance. During the school year, BPP teams up with Monroe County Community School Corporation to offer after-school programs at local elementary schools in which students learn and practice the tools and techniques of acting. For those students who would rather write plays, BPP also hosts a playwriting competition for authors 13 and under.

As Rabinovitz explains, “Theatre provides tools for life that are hard to gain elsewhere. For example, when you’re creating a character as an actor or a playwright, you have to understand their wants, their fears, their needs, and the environment they live in. Ultimately, when they write or perform these characters, they must be able to understand why someone who is different from them would act differently in the same situation.”

Performing helps young people understand others as well as helping them to better understand themselves. According to Weltsek, performing enables a student to ask important questions like “Why, how, what do my actions do, what are the facts, the results, what are my tactics, my objectives?” Performing or playacting enables students of all ages to explore their own sense of self through the world of performance.

Yet, trying to do this self-evaluation in the hustle and bustle of everyday life can be difficult. “Being in the theater allows you to slow it down, so that when the students make a choice, it’s easier to evaluate,” says Weltsek. “Theater creates a dynamic, interactive, organic, engaging, and emergent space for people to explore what it means to be alive, understand, and make meaning.”

Theater offers a way for students — and adults — to experience worlds and peoples they don’t have access to in their everyday lives. It can teach everyone from age 5 to 105 something new about themselves and about the world they live in. Supporting youth theater programs — like Cardinal for Kids and the Ivy Tech-BPP Youth Education program — not only inspires a more informed citizenry but also a more tolerant and empathetic one, and I, for one, think that is something to encourage.