‘Benefit Corporations’ Reflect New Vision of What Businesses Can Be

Perhaps it is no surprise that in our city — affectionately known as “B-town,” bisected by the “B-Line” trail, and home of numerous other “B-”nicknames — a new corporate legal form, the benefit corporation, or “B corp,” would naturally spark some early interest.

Bloomington is already home to two of the 13 distinct entities currently organized in Indiana as B corps: Green Camino, Inc. and The Bee Corp. However, the Indiana public and even businesses are only just beginning to learn about this form. A B corp is a for-profit business incorporated under a relatively new Indiana law (2016), and which has, as part of its purpose, the creation of some general public benefit.

“There is definitely a growing interest in benefit corporations in Indiana,” confirms Katie Birge, executive director of Launch Indy, an Indianapolis coworking space, among what are broadly termed “social-impact startups,” or businesses that strive to accomplish some societal “good” beyond turning a profit. 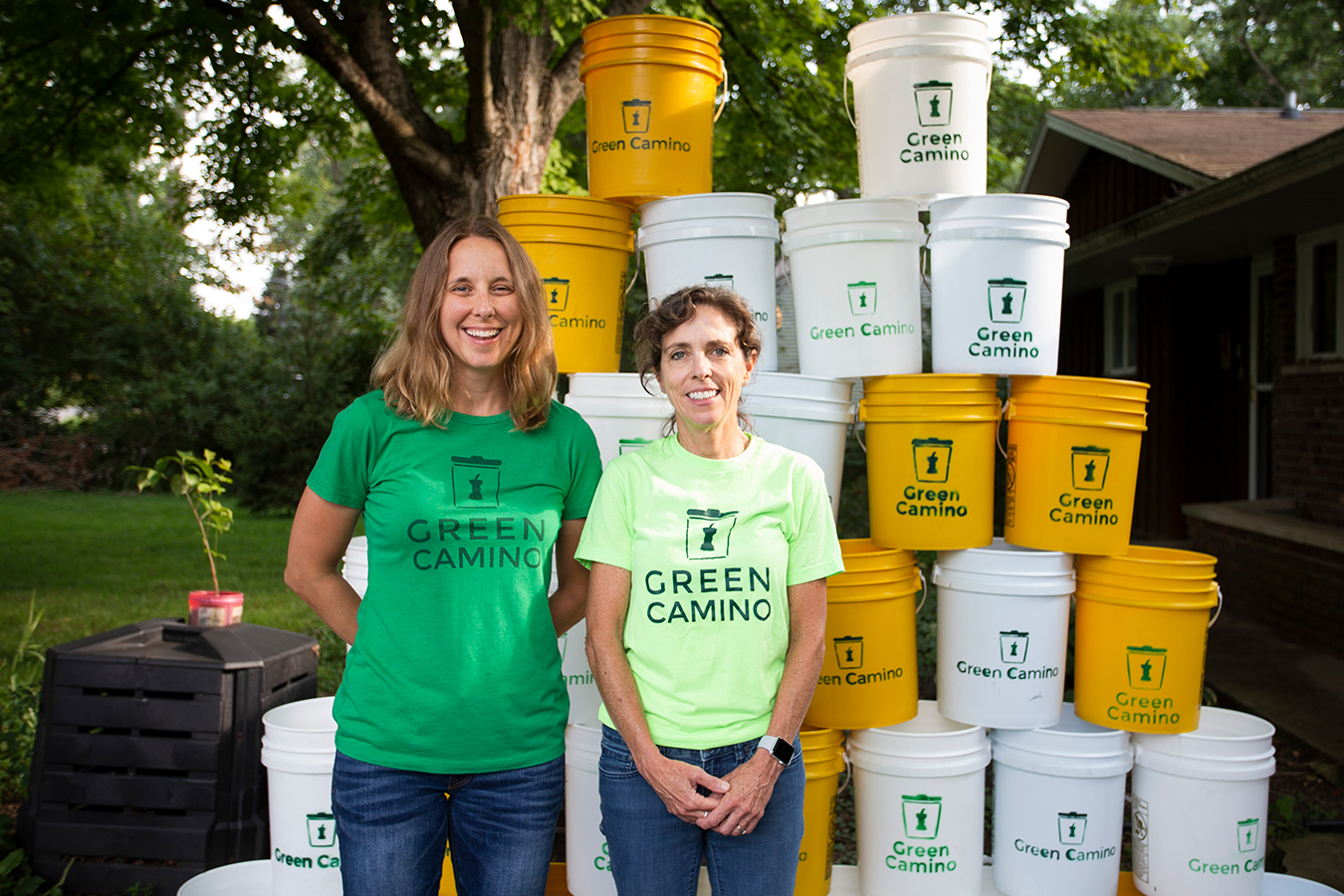 Randi Cox, left, and Kathy Gutowsky of Green Camino Inc. originally planned to make their composting business a nonprofit. But after some research, they learned that they could become a benefit corporation or “B corp” — a for-profit business that also strives to create a general public benefit. | Photo by Chaz Mottinger

Many of the companies organizing as B corps are tech startups, but companies in other industries are beginning to take notice. Birge notes that the B corp form attracts some companies that would previously have considered themselves as nonprofits.

In fact, Bloomington’s Kathy Gutowsky and Randi Cox, of Green Camino Inc., originally envisioned their compost collection business as a nonprofit. However, after some research, Gutowsky approached Cox with the idea of organizing as a B corp instead.

“I had not even heard of a benefit corporation before that conversation,” laughs Cox.

“The actual benefit corporation form is still new to many people,” Cox says, “but many customers are gaining awareness of what it means. We have found that for those people who do know about [the designation], it is very meaningful.”

Gutowsky believes forming Green Camino as a B corp was not more complicated than organizing as another kind of entity. However, because the form is new, confusion persists about the requirements.

One source of confusion is the distinction between organizing as an Indiana B corp and becoming a certified B Corp through B Lab, a nonprofit organization that administers certification standards for B corps. One requirement of B Lab certification is that a company must organize in its respective state as a benefit entity. In fact, B Lab’s requirement actually led Joshua Driver, co-founder of Selflessly Inc., an Indianapolis B corp, to learn of the option to organize as an Indiana B corp. Conversely, Indiana’s B corp law does not require a company to be certified by B Lab to be a valid Indiana B corp.

The B corp structure particularly attracts entrepreneurs who believe corporations should do more than just turn a profit. Selflessly Inc. runs a technology platform to connect companies, nonprofits, and individuals for the purpose of promoting a beneficial social impact. Becoming a B corp just made sense, says Driver. “Our company’s purpose is to help other companies do good, so we had better get out there and do the same. It feels how businesses should be run.”

Gutowsky echoes this sentiment. “We wanted our business to be sustainable, support green jobs, and give back to the community,” she says. “That is what we believe a corporation should do.”

Cox and Gutowsky named a benefits director early on in their organization and implemented procedures to collect data on their company’s beneficial impact. Having processes in place is important, they explain, so that they can more easily assess their company’s impact for the annual benefit report that is required by law.

Indiana B corps must annually measure their beneficial impact against a third-party standard (B Lab’s assessment is frequently used) and prepare a benefit report for its shareholders, the public, and filing with the state.

Green Camino tracks the number of otherwise discarded buckets they collect from local foodservice locations, the pounds of compost collected from their customers, and the amount of money and time their company donates to local environmental and arts nonprofits, all of which will be quantified in their benefit report.

“We are still small, but our company generates an inherent benefit,” adds Cox. Organizing as a B corp was one more layer in Green Camino’s core mission to have a positive impact, literally, “one bucket at a time.” 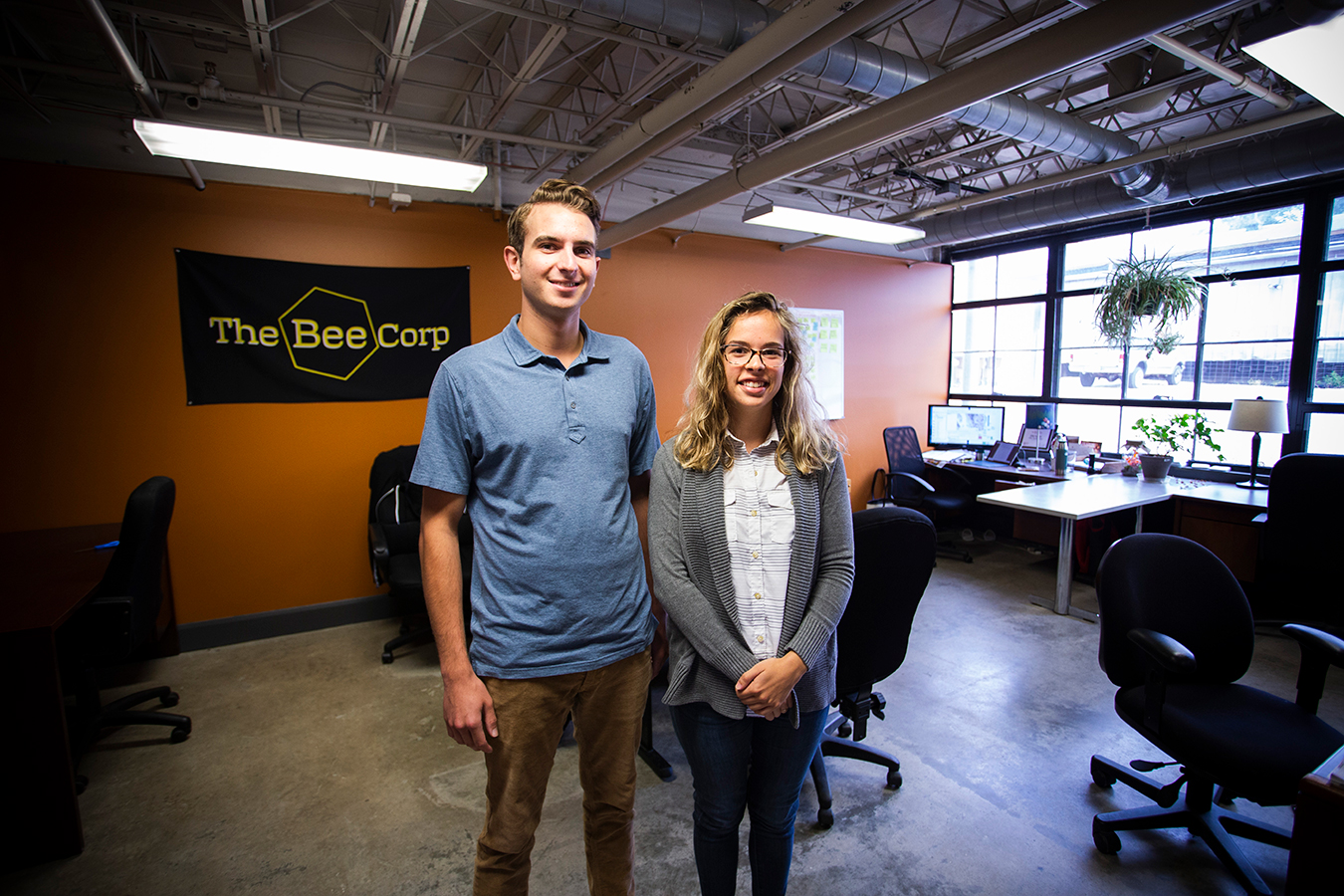 Wyatt Wells, left, and Ellie Symes of The Bee Corp say that more and more people value B corps and their commitment to “doing good.” | Photo by Chaz Mottinger

Like Green Camino’s founders, The Bee Corp’s cofounder and Chief Marketing Officer Wyatt Wells says they initially considered nonprofit status before learning of the B corp form from an early mentor. Wells said the B corp form made sense given the company’s core business of increasing the understanding of bees and bees’ contributions to our environment and global food security.

Wells also believes the designation makes solid business growth sense. “Increasingly, employees are attracted to companies that are morally aligned with their own values,” he notes. The public accountability of B corp status strikes a chord with new job entrants who desire, to a greater degree than past generations of workers, to work for an employer committed to “doing good.”

Both Wells and Driver say that B corps should be prepared to educate investors on what the form is and what it means for their investments. Driver says that investors do not always understand at first that a B corp is a for-profit business, not a nonprofit.

Ellie Symes, The Bee Corp CEO, added that being a B corp was not more onerous than being any other corporation. Once the company has put processes in place to collect the data for the required annual benefit report, Wells explains, the burden is not large. “It’s a great piece of data,” he says. “Putting out the [benefit] report is a great way to drive brand awareness.”

“Doing the assessment in the benefit report shows you how your company can do good, even in small ways,” agrees Symes.

Overall, B corp owners agree that a shifting societal mindset in what corporations can and should be will attract a new generation of Indiana business owners and consumers to this new type of entity.

Erin Martoglio is an attorney at Freitag & Martoglio, LLC in Bloomington. When not practicing law she enjoys running, gardening, cooking, and writing.
Chaz Mottinger