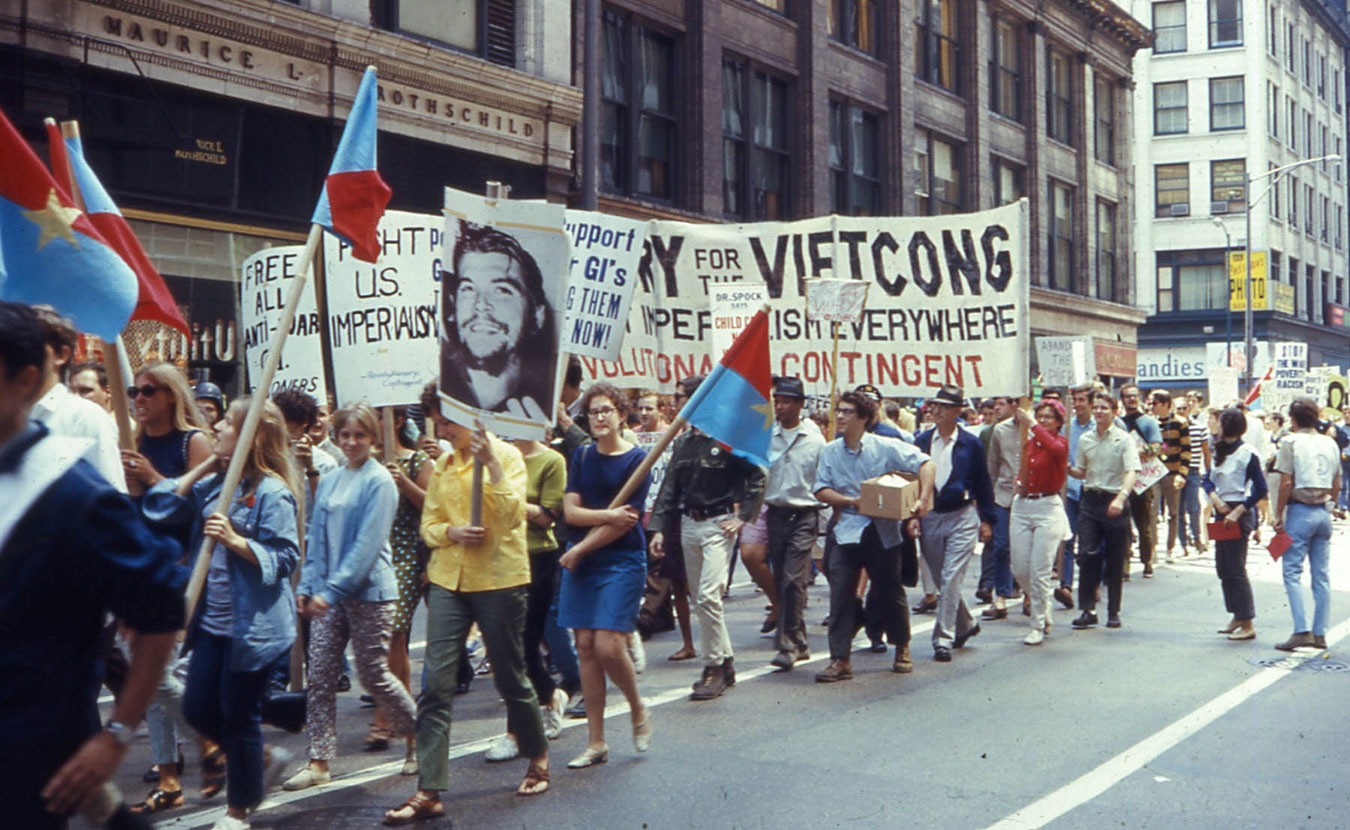 The conference, festival, and symposium called Wounded Galaxies 1968 intersects with Bloomington’s orbit next month. The event looks at the tumultuous year 1968, which included the Chicago protests and riots during the Democratic National Convention. (Pictured here is an anit-war march prior to the convention in 1968.) Wounded Galaxies organizer Joan Hawkins says the event will be more than a museum piece: “We want to confront the whole concept of revolutionary aesthetics, and ask, ‘Where do we go from here?’” | Photo by David Wilson, Creative Commons

[Editor’s note: Michael G. Glab’s full interview with Joan Hawkins can be heard today on his radio show, Big Talk, which runs on WFHB (91.3FM) every Thursday at 5:30 p.m. and will be available, along with podcasts of past shows, at WFHB.org. Glab’s monthly profile for Limestone Post, which is based on one of his now 30-minute Big Talk interviews, will now be posted on the same day the interview airs on Big Talk.]

“The feeling we had then seemed to be, If we don’t resolve things now, this could be the end of civilization as we know it.

“We’re all feeling that way again.”

So says Joan Hawkins, associate professor in The Media School at Indiana University and one of the prime movers behind the upcoming Bloomington remembrance of that annus horribilis, 1968. She lived through that earthshaking year. A teenager in suburban San Francisco, she was already involved in politics and protest, like many young kids back then.

The year featured wars and revolution all over the world. Vietnam. Paris. Mexico. Brazil. The Prague Spring. Here in the United States, there were assassinations and riots. King and Kennedy killed. Warhol shot in the belly. There were the Orangeburg Massacre and Chicago. The shootout in Cleveland. College campuses across the country were scenes of sit-ins and shut-downs. Even in Bloomington, members of the KKK firebombed an African-American-owned shop near the IU campus. Joan Hawkins, associate professor in The Media School at Indiana University and one of the founders of Wounded Galaxies. | Courtesy photo

It seemed the world was coming apart at the seams.

It’s been 50 years since then. And Hawkins wonders if another age of conflict, of revolution, just might be arising.

That’s one of the main reasons she and her Burroughs Century colleagues are partnering with IU to stage Wounded Galaxies 1968: Beneath the Paving Stones, the Beach, a conference, festival, and symposium. Official on-campus events run from February 8 to 11 with preconference festival events — including art exhibits, film screenings, and music performances — having already begun.

The Burroughs Century gang came up with the idea as part of a now-biennial series of events after their initial celebration in 2014 of the 100th anniversary of the birth of William S. Burroughs.

“After we finished the Burroughs Century,” Hawkins says, “we stayed together thinking that we would continue to produce experimental film and music events, loosely construed, so we did another event, a scaled-down event called Wounded Galaxies.

“That is a quote from William S. Burroughs’ novel, The Soft Machine: ‘Across wounded galaxies, we intersect.’ We had stayed together and we were looking toward 2018. One night we were at the Atlas, we were having a meeting, talking about what are we going to do for our next event, and Charles Cannon [Burroughs Century co-founder] looked at me across the table and said, ‘You know, 2018 is the 50th anniversary of 1968.’ Eyes locked across the table and we all said, ‘Yes! We have to do this!’”

Like many d’un certain âge today, Hawkins began to come of age during that horrible year. “I was in high school in ’68,” she says. “Eugene McCarthy was running for the Democratic nomination for president. McCarthy had got in touch with Bobby Kennedy, and said, ‘Look, I don’t want to run if you’re going to run. We don’t want to split the peace vote.’ Bobby Kennedy at that point said, ‘I’m not going to run.’ So McCarthy had quietly begun building a base.

“For whatever reason, the German-language classroom became McCarthy headquarters at my school in Daly City. So we would get together at a quarter to eight every morning and do what needed to be done. “There had already been a great deal of campus activism, a lot of uprisings happening, but at this moment, we were like, ‘Okay, if the Democratic Party is actually going to run a peace candidate and they’re going to talk seriously about ending the war in Vietnam, we will give electoral politics one last chance before we call for total revolution.’”

But then Bobby Kennedy jumped into the race at the last moment. He won the Indiana primary and his eleventh-hour campaign seemed to snowball. He won the all-important California primary and was shot hours later.

“Now Bobby Kennedy’s dead. Eugene McCarthy doesn’t have any delegates or money left. The person with the delegates going into the Democratic National Convention in Chicago is Hubert Humphrey — Lyndon Johnson’s vice president,” Hawkins says. “At that point, we felt the rug had been pulled out from under us.

“After Johnson had announced ‘I will not seek nor will I accept the nomination of my party for president,’ we thought we had won. But Humphrey was Johnson-lite! It seemed to us Humphrey was like having Johnson all over again. That’s why we knew the Democratic National Convention was going to be a riot.”

Another who knew the late August assembly in Chicago would be a fiasco was William S. Burroughs, the Beat Generation author and a pioneer of postmodernist literature.

“Into this sure-to-be-exciting week, Esquire magazine sends Burroughs, Jean Genet — he had to be smuggled into the country via Canada because he had a criminal record and he was (gasp!) a homosexual — and Terry Southern, these three madmen, to cover the convention,” Hawkins says.

The National Mobilization Committee to End the War in Vietnam (the Mobe), the Youth International Party (the Yippies), and the Students for a Democratic Society (SDS) all had promised to converge on Chicago to disrupt the convention. Many leaders of the various groups had promised hundreds of thousands of protesters in the streets as the Democrats selected their nominee. Chicago Mayor Richard J. Daley responded by canceling all days off for the city’s police officers and instituting 12-hour shifts. Gov. Sam Shapiro sent in the Illinois National Guard. All told, some 23,000 armed personnel confronted fewer than 10,000 protesters. What followed was termed a “police riot” by the commission assigned to study what had gone wrong after the convention. Police beat and gassed protesters, journalists, and passersby in at least four separate bloody street battles. “The whole world is watching!” became a rallying cry of the protesters as network TV cameras recorded the violence.

“Burroughs was the only one who wasn’t surprised,” Hawkins says. “Terry Southern and Jean Genet were both horrified at what was going on. Burroughs said, ‘I keep telling you people this government is not what you think it is.’”

Coincidentally, as blood ran in the streets of Chicago, the Soviet Union-led Warsaw Pact countries invaded Czechoslovakia, with tanks rolling down the streets to crush the Prague Spring.

Both of these events followed the May 1968 near-civil war in France. French leaders feared a revolution as protesters took to the streets of Paris, building barricades, burning cars, smashing windows, and daring security forces to attack them. This followed a nationwide wildcat general strike with 11 million workers demanding increased pay and improved workplace conditions.

French President Charles de Gaulle would eventually stage a referendum. He lost and subsequently quit the presidency. “Georges Pompidou, the prime minister, was then brought in as president, so the same thing happened there that happened here — the students expected change and instead got de Gaulle-lite!” Hawkins says.

“On both sides of the Atlantic, you had this disillusionment with the whole of electoral politics, this feeling like, ‘Okay, we tried it one last time — it isn’t going to work.’”

Revolutionary fervor was already spreading across the globe. “There were uprisings in Germany, in Italy, in Ireland, in the United Kingdom, in Poland, India, Pakistan, Japan, all across the African continent, and then in Brazil and Mexico City,” Hawkins says. “It was unbelievable.”

The Wounded Galaxies 1968 conference next month here in Bloomington will be more than a museum piece. “It’s not only a remembrance but a looking forward,” Hawkins says. “We don’t want it to be like a mausoleum. We want to confront the whole concept of revolutionary aesthetics, and ask, ‘Where do we go from here?’” Participants in the conference include artists, journalists, musicians, filmmakers, and others who were active in ’68 or those who research the year. They’ll ponder whether today’s disillusionment and disappointment with electoral politics — today’s search for the sand beneath the cobblestones — can explode into violence and revolution similar to what happened 50 years ago.

Village Voice film critic J. Hoberman is curating the movie presentations throughout the multiday event, revolutionary and rule-shattering works such as George Romero’s Night of the Living Dead, Jean Luc-Godard’s La Chinoise, Otto Preminger’s Skidoo, Jules Dassin’s Uptight!, and Bob Rafelson’s Head. There’ll be exhibits, including the Lilly Library’s showing of artifacts from the Situationists, a European consortium of revolutionary artists, intellectuals, and avant-gardists, and of prints by Rikki Ducornet, the poet and artist fascinated with art as subversion (and who was the subject of the Steely Dan hit song, “Rikki Don’t Lose that Number”). New Zealand performance artist and composer Annea Lockwood will recreate her “Piano Burning” piece in Dunn Meadow (and, yes, she’ll actually burn an upright piano). Rolling Stone music journalist and cultural critic Greil Marcus will give one of the keynote addresses.

Musicians Ken Vandermark and Phillip Sudderberg will perform at The Back Door on Thursday, February 8, at 10 p.m., along with KCAI Sound Art Collaborative directed by Dwight Frizell. The Muttering Sickness will perform The Whole World Is Watching (a multimedia experience including a live reading, film footage of the Chicago riots, and more) at The Blockhouse on Saturday, February 10, at 10 p.m.

Preconference festival events will take place at various locations, including the Buskirk-Chumley Theater, the I Fell Building, The Blockhouse, and Monroe County Public Library. The preconference events are open to the public but registration is required for attendance at on-campus academic conference events. People registered for the conference get free admission to off-campus events.

Wounded Galaxies 1968 promises to be as event-packed and quite possibly chaotic as the year itself. “We don’t know how we’re going to keep it together,” Hawkins says. “I was in a meeting the other day and I got a text message from Charles Cannon saying there was a sale on whiskey at Big Red, so I guess that’s partly how.”

[Editor’s note: Michael G. Glab tells us he will be reading his fiction,“as well as possibly some Studs Terkel remembrances,” at both the Burroughs birthday party event on February 5 and a Writers Guild event on March 8.]