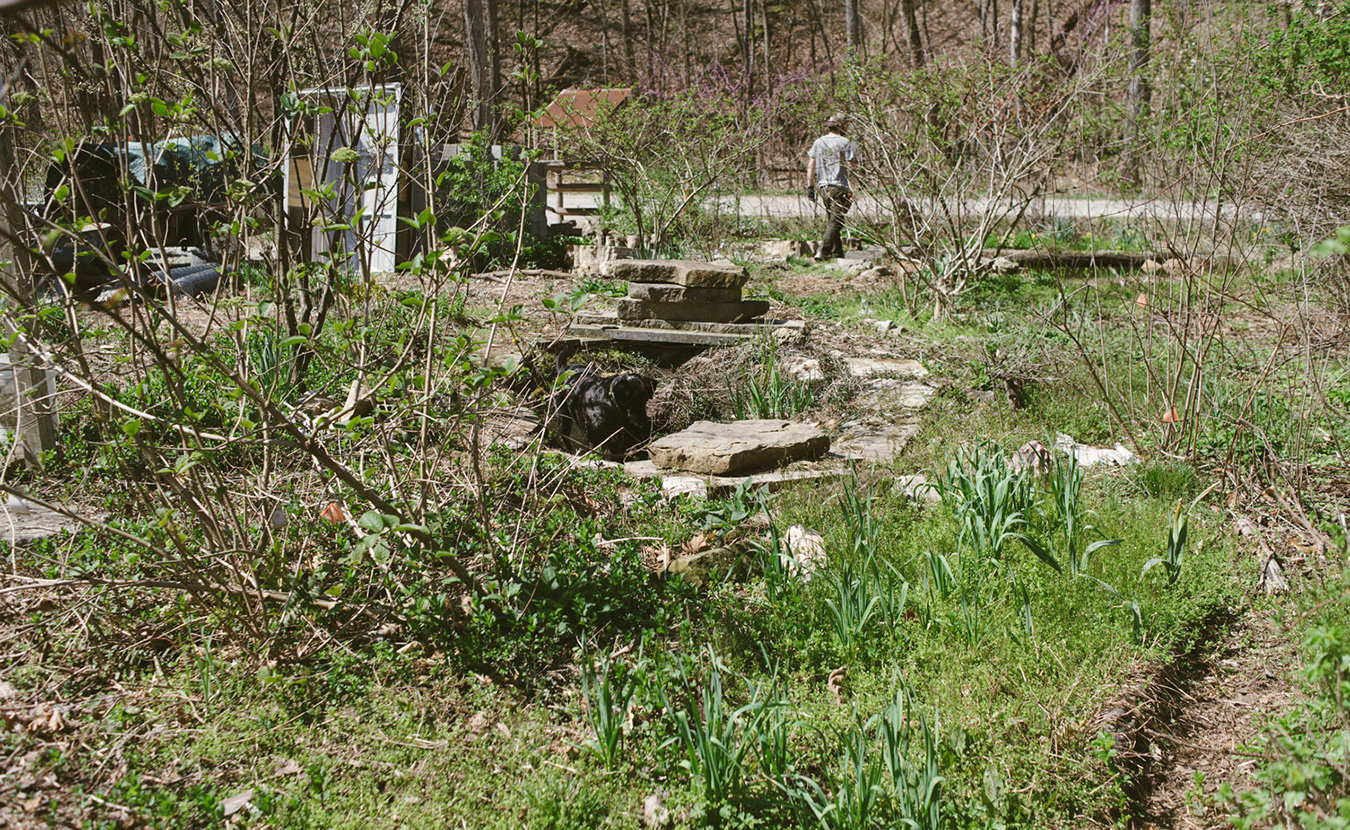 Tucked in a valley near Lake Monroe stands an unusual three-acre farm. It contains no orderly rows of corn or soybeans but, instead, blends gently into the forest that surrounds it on three sides. At its center is an area of raised beds used for asparagus, strawberries, raspberries, and annual vegetables. Encircling the beds is a double fence that acts as a run for chickens and ducks.

The surrounding hills are terraced and planted with fruit trees, berry bushes, and hazelnuts. Beneath the bushes grow perennial herbs and greens. Intermingled among them are support plants: shrubs that provide nutrients, ground covers that shelter predatory insects, and flowers that feed pollinators.

In a shady grove on one side of the farm stands a pile of logs, covered in netting, growing shiitake mushrooms. Standing low around the poultry run are several greenhouses, full of starter plants for the coming year. Numerous ponds of all sizes are strategically positioned about the farm, attracting dragonflies, frogs, and salamanders.

The farm, Bread & Roses designed and built by Salem Willard, is an example of permaculture.

Willard calls permaculture “an approach to sustainable ecological design — part philosophy, part methodology, and part science.” Rhonda Baird, who teaches a Permaculture Design Certificate course through the Center for Sustainable Living, defines it as “an ethical system of design that integrates humans with the natural environment.” The word is a portmanteau of “permanent” and “agriculture.” The philosophy originated as an attempt to reshape industrial agriculture into something that works in harmony with the natural world. Salem Willard built a double fence around his garden beds that functions as both a run for chickens and ducks and a compost area. | Photo by Natasha Komoda

The sheer breadth of permaculture’s scope can make it difficult to grasp. As Baird says, “Permaculture design can be applied to everything from organizing your kitchen all the way up to regional planning.” It can be thought of as applied ecology in the same way that engineering is applied physics. It draws on ecology and economics and applies them under a trio of guiding ethics: Systems should be designed to care for the ecosystem, to care for people, and any generated surplus should be shared. Permaculture is not without criticisms (which will be discussed in-depth in part two of this series). While many permaculturists are trained ecologists or economists, many are not — some come to permaculture with no scientific training. There are questions surrounding the use of non-native, or even invasive, species. Permaculture education can vary in quality and content, and it all leads to some disagreement about which methods are effective and what can be called “permaculture.”

When it is applied on the farm, permaculture design attempts to create an ecosystem that provides a wealth of food and becomes a part of the surrounding ecology. Mark Shepard’s New Forest Farm in Wisconsin is a spectacular example of this. He designed his 106-acre farm after the native oak savanna that once dominated the northern Midwest. It consists of rows of chestnut, walnut, hickory, and pine nut trees separated by wide grassy lanes. Among these trees grow apple, pear, and cherry trees. Hazelnut shrubs grow in the shade beneath, and crawling out from under everything are berry brambles, such as raspberry and blackberry. Cows, pigs, chickens, ducks, turkeys, and guinea hens graze among all of these.

Where the trees are too young to allow grazing, Shepard adds vegetables, such as zucchini and asparagus. When the trees get old enough to shade out the grass below, he chops them down and harvests the wood for lumber, firewood, and paper.

The farm produces an abundance of different harvests, but, more importantly, it acts as a healthy ecosystem that provides habitat for the many native species that could be displaced by a conventional farm. Where a conventional farm destroys wildlife habitat, Shepard’s farm is habitat.

Locally, Willard’s Bread & Roses illustrates another aspect of permaculture. Permaculturists seek to create connections between the elements of any system they are designing. Willard doesn’t just run a farm, he also runs a nursery called Bread & Roses Nursery with business partner Jonas Carpenter. The farm provides some of the nursery stock and the nursery brings new plants to the farm. Willard and Carpenter also run a permaculture landscaping business, which uses the nursery’s stock. They sell the produce from the farm alongside the nursery’s plants at the Bloomington Community Farmers’ Market. In true permaculture fashion, Willard has assembled a constellation of businesses that rely on and support each other. The Bread & Roses property, including this house, is off the grid. Solar panels on the roof provide electricity and a large water-collection tank is the primary water source for the property. | Photo by Natasha Komoda

In addition to farms and businesses, permaculture design can be applied at the residential level to create self-reliant homesteads.

Growing food at home is the best way to start, Willard says. “It’s what most people think of when they think of permaculture.” As on a larger scale, the goal is to create a food-producing garden that acts as a part of the surrounding ecosystem. But food is just the starting point. “When a household starts practicing permaculture, what they’re really doing is applying permaculture design,” says Baird. “They start to evaluate what they’re doing. The aim is to cycle materials and be conservative — [to] reduce fossil fuel energy and maximize the function of natural systems.” The goal is to create a system that works with the natural world to get what it needs and that handles its own waste.

Two of the biggest pieces to consider, she says, are soil and water. Permaculture designs aim to capture and retain water. Roof runoff is directed into tanks. Landscapes are designed to catch and hold water in ponds or in the ground, rather than direct it off property. Dish, shower, bath, and laundry water — known as gray water and normally wasted — can be retained in anything from buckets to engineered systems and reused, to varying degrees, in the garden. Food, paper, and yard waste — any organic matter — can be kept out of the trash and directed to compost piles to build soil.

Another big goal is to use less fossil fuel energy. Gas-based heating can be replaced with wood stoves and passive solar design, in which a building is designed to naturally capture and store the sun’s heat. Electricity can be generated from renewables, such as wind and solar, and usage can be reduced.

Permaculturists didn’t invent any of this technology. Permaculture design just helps put the pieces together in a way that best serves the needs of both people and the ecosystem. It provides an alternative to industrial design that allows us to place ourselves back in nature.

Permaculture is often referred to as a movement, but Baird prefers to think of it as a network. “When we refer to it as a movement, then there’s an agenda, and people will react to that agenda,” she says. “When we say it’s a network, then it’s more open. It can be a resource for people.”

Daniel Bingham is a software engineer, permaculturist, and community organizer. He grew up in Bloomington and graduated from Bloomington High School South. He left to attend Skidmore College in upstate New York, graduating with a BA in physics and computer science. After spending a semester teaching science in Thailand, he returned to settle in the Waterman neighborhood on Bloomington's west side. He has worked for a variety of software companies and spends his free time writing, gardening, and organizing around cooperatives and sustainability.
Natasha Komoda