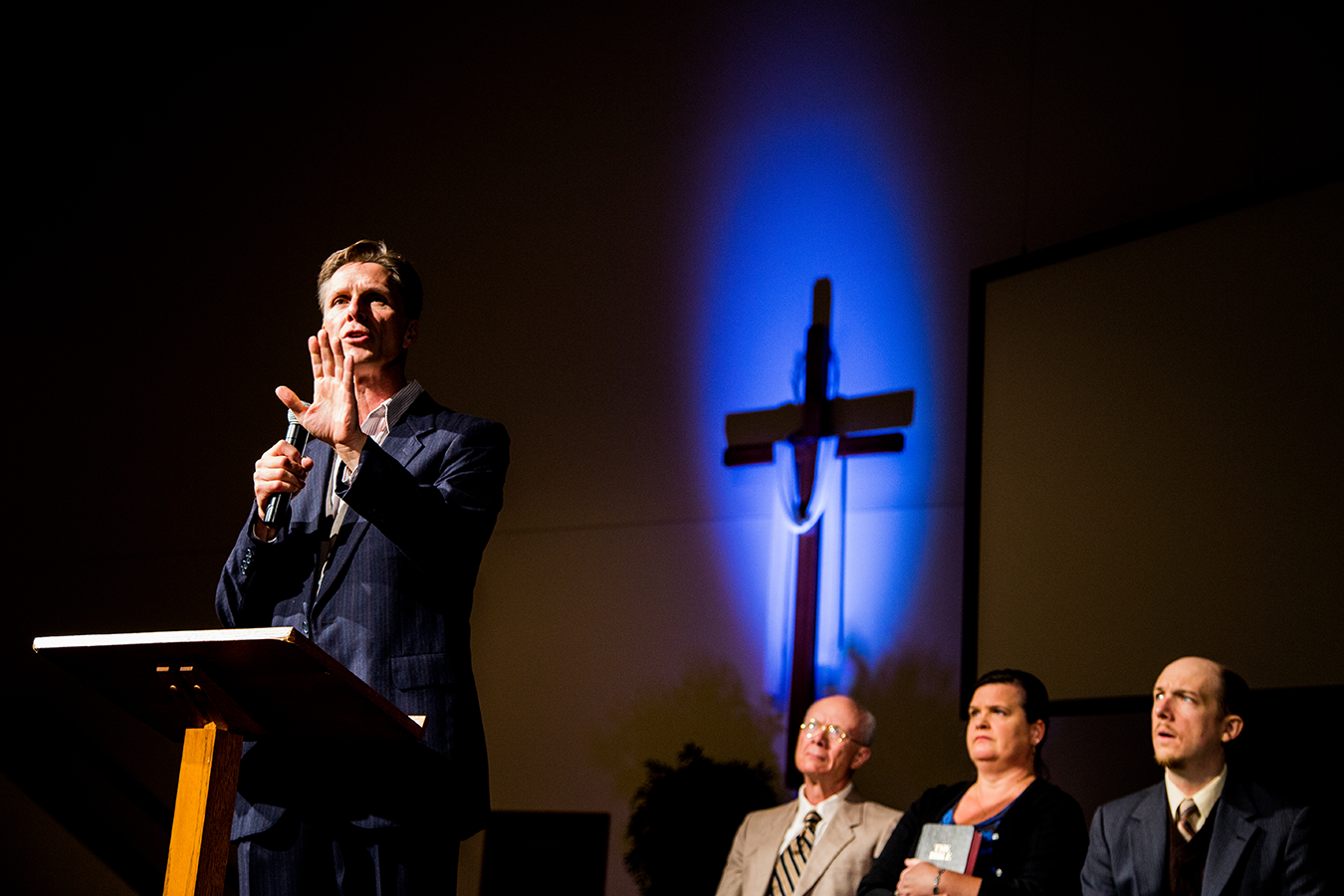 “How do you bridge the divide when you fundamentally disagree with someone on something that is a core part of your identity? We see the characters in the play struggling to stay connected as their belief systems drift further apart,” says Kate Galvin, Artistic Director of Cardinal Stage. From left to right, actors James Krag (Pastor), Ken Ganza (Elder), Shannon O’Connor Starks (Wife), and Liam Castellan (Associate Pastor). | Photo by Blueline

There are some subjects that people regularly and deliberately avoid talking about, subjects deemed too personal or too divisive for polite conversation. One of those, perhaps the most taboo of all, is religion. This topic is often only broached in intimate circles, usually with those who are known to be likeminded. But Cardinal Stage wants its audiences to talk about beliefs, and how those beliefs influence our society.

Cardinal’s fall Mainstage production, The Christians, is part of a series of events meant to spark conversations about religious beliefs. In the drama, Christianity is certainly a central topic, but the play isn’t necessarily about Christianity. “This is a story about a leader trying to make a radical change to his organization, which happens to be a church,” says Kate Galvin, Artistic Director at Cardinal Stage. The play’s staging will cause audiences to feel as if they are a part of a congregation, with actors preaching at the altar and members of community choirs singing hymns. 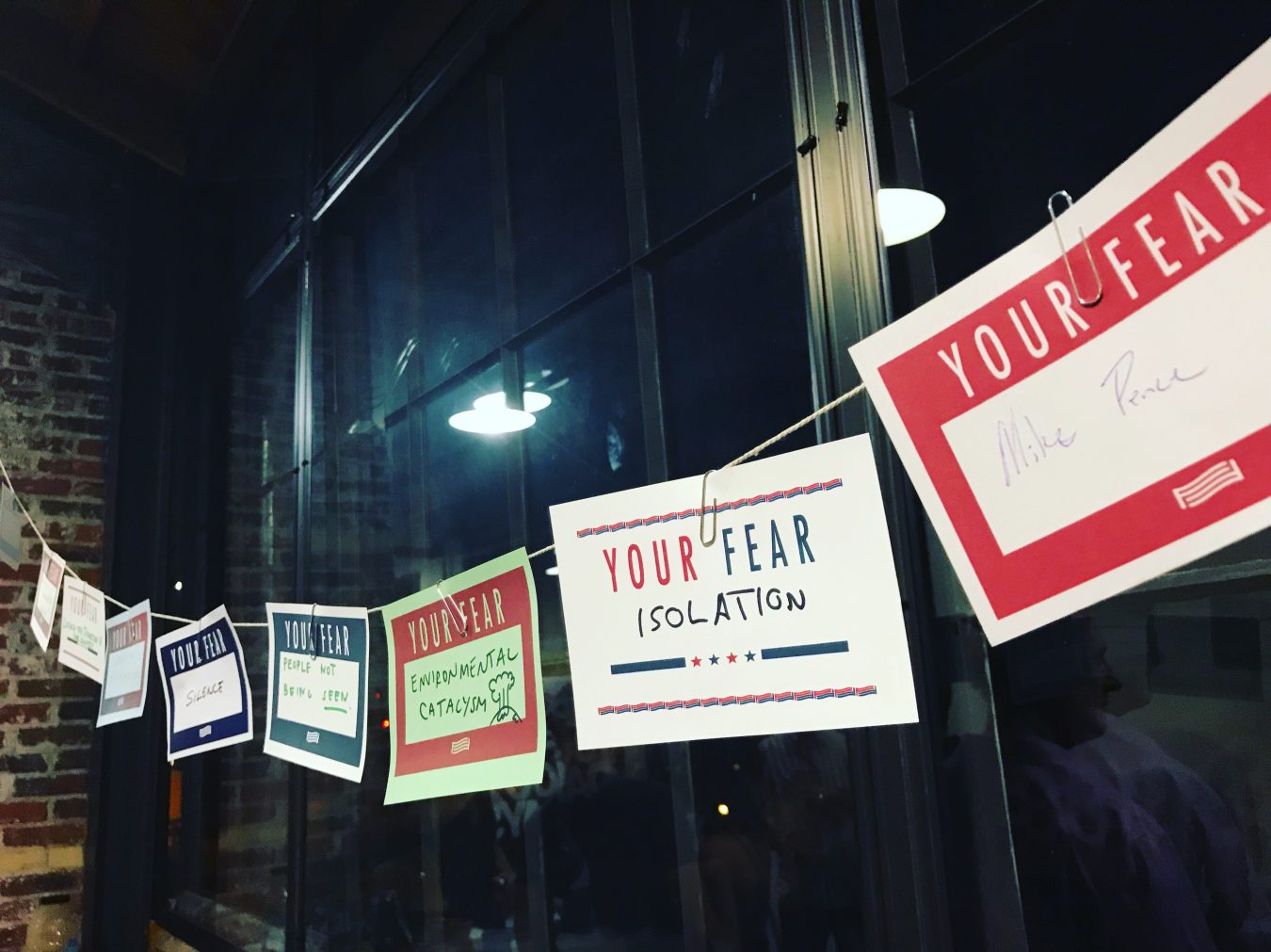 As part of their community engagement efforts, Cardinal is sponsoring two programs that will help start the conversation. The first event is a reading of a translation of the Yiddish play ‘God of Vengeance,’ in partnership with IU’s Borns Jewish Studies Program, and the second event is sponsored by Cardinal in collaboration with the city and For Freedoms. Secretly Group hosted a For Freedoms exhibit on First Friday earlier this month (pictured). | Photo by Samuel Welsch Sveen

The story is about a pastor who has an epiphany that changes his interpretation of scripture, and about how the congregation comes to terms (or doesn’t) with their leader’s beliefs. It is a religious-themed example of how people examine their own beliefs and interact with others who have different beliefs. “One important aspect of the play is how we accept others’ beliefs,” says Galvin. “How do you bridge the divide when you fundamentally disagree with someone on something that is a core part of your identity? We see the characters in the play struggling to stay connected as their belief systems drift further apart.”

This is the primary conflict of the drama, but as Galvin explains, “The characters in the show all honor each other by really listening and questioning, and they give each other the benefit of the doubt that they are each coming from an honest place.” Though challenging, the characters attempt a sympathetic understanding even if they don’t resolve their differences.

Trying to understand differing faiths or values is hard, but it’s nearly impossible without actually communicating with people who have different beliefs. As part of their community engagement efforts, Cardinal is sponsoring two other programs that will help start that conversation. The format is different at each event, but both will provide opportunities to further contemplate religion in society.

As part of the American Literary Translators Association conference, which is being held on the Indiana University campus, a staged reading of God of Vengeance will be presented by Cardinal in partnership with the IU Borns Jewish Studies Program on November 1 at 12:30 p.m. at the Ivy Tech John Waldron Arts Center. This Yiddish drama by Sholem Asch was translated and presented on Broadway in the early 20th century with much scandal. The play is about a Jewish family that owns a brothel, which makes marrying off the daughter difficult — but perhaps not as difficult as her being a lesbian in a relationship with one of the brothel’s working women. The drama highlights the hypocrisies found in religion and society, woven with the love and frustrations within a family. 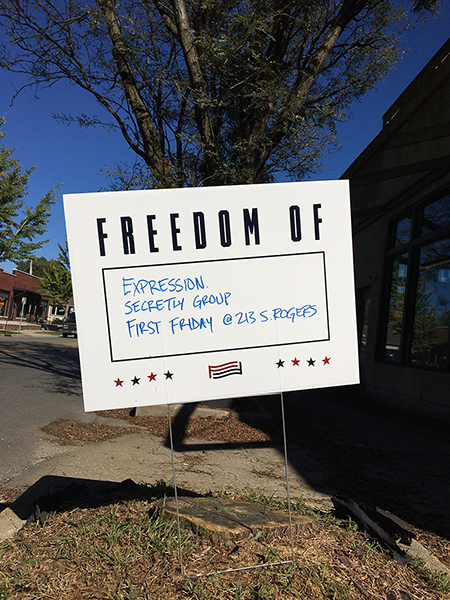 The For Freedoms event at Secretly Group featured various artists’ works with the common theme “On Fear,” along with an opportunity for attendees to register to vote.

God of Vengeance focuses on characters of Jewish faith, which elicits a different cultural and religious understanding than The Christians. But God of Vengeance is not strictly a religious play either. It contains serious social conflicts that resonate today: understanding and accepting others’ sexuality, offering forgiveness, and finding redemption. Religion can influence a person’s understanding of each of these concepts, but how to determine what is acceptable as a society is tricky when considering the many different belief systems and the individual interpretations within them, as well as the fundamental right to freedom.

Freedom of religion and how it impacts our social and political systems are the topics of the other Cardinal outreach event. This pre-show panel discussion is co-sponsored by the City of Bloomington as part of For Freedoms, a national initiative to bring artists into political conversations around the four freedoms listed by President Franklin D. Roosevelt and presented in paintings by Norman Rockwell — the freedoms from fear and want, and freedom of speech and religion.

The local discussion will include a panel of experts from a variety of religions, professions, and personal backgrounds with an opportunity for audience questions and participation. Sean Starowitz, Assistant Director for the Arts in the city’s Economic and Sustainable Development Department brought the program idea to Cardinal. “The City of Bloomington is taking part in the 50 State Initiative by For Freedoms project as a way to signal permission for arts groups to engage the community with programs or artwork that might be challenging,” says Starowitz.

Starowitz collaborated with Rachel Glago, who works at Cardinal Stage and at Secretly Group while also serving on the Bloomington Arts Commission, to coordinate the panel discussion. They enlisted panelists Brian Richardson Jr. (Director of Diversity, Equity, and Inclusion at IU SPEA), Bridget McIntrye (Director of Religious Education at St. Paul Catholic Center), and Danielle McClelland (Executive Director of the Buskirk-Chumley Theater) to participate. The discussion will be moderated by Dawn Johnsen (Professor at the IU Mauer School of Law). “Each of our panelists, and our moderator, have unique knowledge and experiences to share when it comes to religious freedom,” says Glago.

The panel discussion, on October 20 at 6:30 p.m. at the Ivy Tech John Waldron Arts Center (before the 7:30 p.m. performance of The Christians), is one of several projects the city is doing as part of the 50 State Initiative. For Freedoms suggests using four mediums to spark conversation: billboards, yard signs, exhibitions, and town hall programming. And all programs need to involve artists, as For Freedoms is a non-partisan organization that melds art and politics to create dialogue and promote civic engagement. 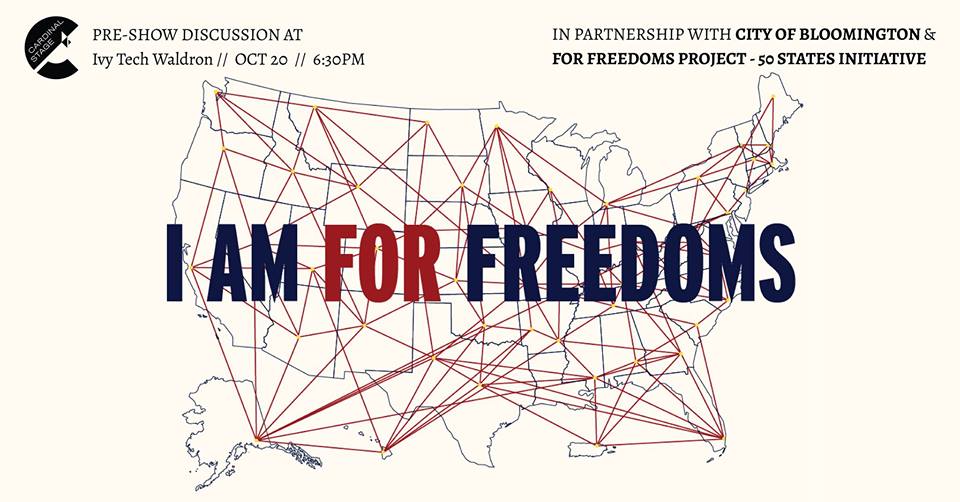 For Freedoms suggests using four mediums to spark conversation: billboards, yard signs, exhibitions, and town hall programming. “Each of our panelists, and our moderator, have unique knowledge and experiences to share when it comes to religious freedom,” says Rachel Glago.

In addition to the panel discussion, Starowitz collaborated with Secretly Group on an exhibition and artist talk early in October. The event featured various artists’ works with the common theme “On Fear,” along with an opportunity for attendees to register to vote. Around the same time, yard signs were distributed to interested citizens with “Freedom Of” and “Freedom From” printed on them, along with a blank space for recipients to fill in. More yard signs will be available at the panel discussion and can be picked up at the Economic and Sustainable Development office in City Hall until supplies run out. “Freedom is a general concept, but when we really think about what it means to be free, it can get personal,” says Glago. “And how do we prioritize and balance the freedoms we want or are granted? Does one freedom get suppressed when another is elevated?”

Art, including theatre, has always been an avenue for expressing social issues. “In ancient Greece, the theatre was a place where oppressed characters had a voice and could take action,” says Starowitz. “It was a safe space for presenting ideas and starting conversations.” The audience is able to immerse themselves in a different perspective. Galvin hopes The Christians and the programs around it will provide opportunities for similar experiences. She says, “As Americans, we hold freedom of religion as a pillar of our national identity. But how can we truly embrace that ideal and not just tolerate but understand each other?” Encouraging a conversation is a good start.