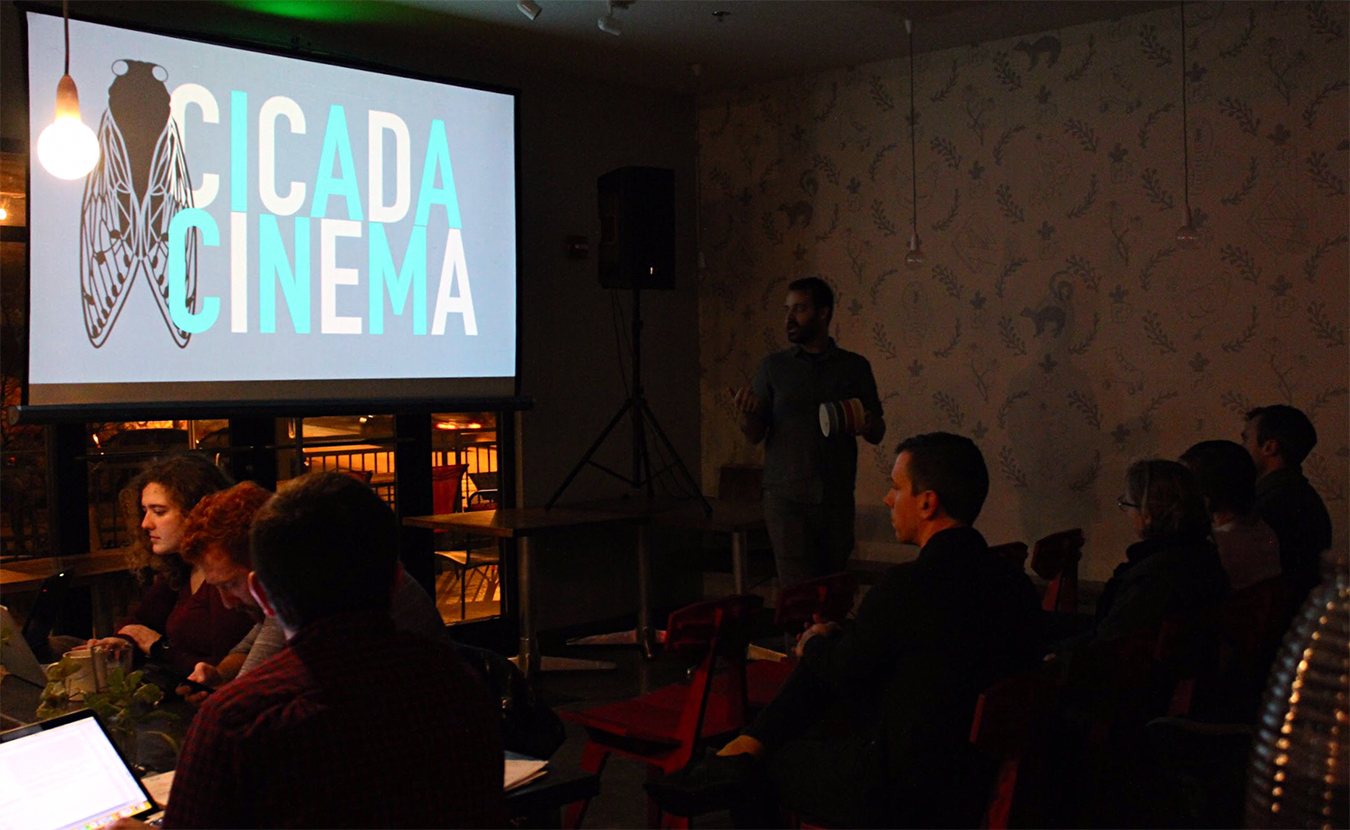 Cicada Cinema, a small, community-driven and volunteer-run pop-up theater in Bloomington, hosts a variety of underrepresented films and related activities. Pictured here is a recent event at Hopscotch Coffee. Cicada Cinema will screen Amazon Studios’ ‘Beautiful Boy,’ a film about coping with addiction, followed by a discussion, at the FAR Center for Contemporary Arts on Tuesday, February 12. | Photo by Nicole McPheeters

Beautiful Boy is a film that chronicles a painful, yet inspirational, account of survival and recovery in a family coping with addiction. Tuesday, February 12 at 7:30 p.m., Cicada Cinema, in partnership with Indiana University Cinema, IU Center for Rural Engagement, and the FAR Center of Contemporary Arts, will be hosting a free screening of Amazon Studios’ Beautiful Boy. Directed by Felix van Groeningen and starring Steve Carell and Timothée Chalamet, the film is based on the memoirs Beautiful Boy by David Sheff and Tweak by his son, Nic Sheff. The screening of the film will be followed by a livestream Q&A session with the authors, David and Nic Sheff. Cities across the country will be showing the film simultaneously, and audience members are invited to submit questions via Twitter.

Jon Vickers, founding director of IU Cinema, explains that for this nationwide screening, the film’s distributor, Amazon Studios, has targeted theaters in towns and cities near areas with a high density of opioid overdoses and addiction.

“Amazon is hoping this film and Q&A will start needed conversations in the communities where it plays,” says Vickers. “They are also reaching out to health care providers and addiction specialists in each area, promoting the events to encourage them to be part of the discussions.”

In recent years, Amazon Studios has surfaced as a major player in the independent film market, distributing stories like Beautiful Boy on its Prime Video streaming service. Unlike other streaming services, Amazon Studios has aimed to release movies in theaters before posting them online. This approach celebrates the traditional movie-going experience, while also ensuring these stories are reaching a wider audience. 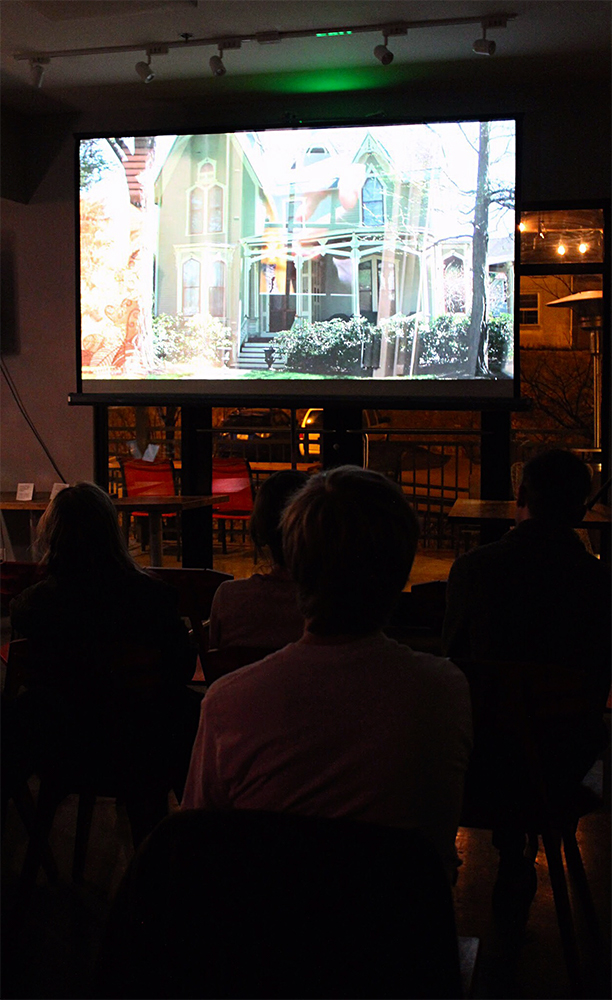 Here, Cicada Cinema hosts their monthly Instant Gratification Movie Challenge at Hopscotch Coffee. The challenge asks creators to collectively choose a theme, then they are then allowed one month to create short films based on that theme. | Photo by Nicole McPheeters

Amazon Studios first approached a theater chain in Bedford to host the screening. Bedford is in Lawrence County where, in 2016, a public health emergency was declared due to an opioid-related spread of hepatitis C. Neighboring counties Scott and Washington had similar emergencies declared almost a year earlier and were recently identified by the CDC to be among the top 100 counties (numbers 32 and 57, respectively) in the nation most at risk of outbreaks of HIV and/or hepatitis C as a result of the opioid epidemic.

When the theater in Bedford passed on the opportunity from Amazon, IU Cinema was approached to host the event. However, they found the screening could not fit in their already booked schedule, so they looked into other options, as they felt this film has a message that should be heard in the community.

“It is a heartbreaking story,” says Vickers, “but one that cannot be ignored. Addiction does not discriminate. There is so much stigma surrounding addiction and the opioid epidemic/crisis, yet most of us have friends, neighbors, or loved ones who are affected by it.”

IU Cinema decided to partner with Cicada Cinema, a local pop-up movie theater, to host the event. Founded in 2016, Cicada Cinema has sought to bring high-quality screenings of underrepresented cinema to the community. According to co-founder Nile Arena, the screening of Beautiful Boy is a perfect fit for Cicada Cinema’s mission.

“I think we’re partnering on a film that seeks to address an issue that is tragically all too familiar to Monroe County — and Indiana at large — right now,” says Arena. “I think this opportunity is unique, so it’s been great that everyone’s pitched in to allow it happen.”

Cicada Cinema consists of five members who came together over a love of movies and a desire to showcase a wider variety of cinema than what had previously been available. As a pop-up, Cicada Cinema often screens films in local businesses and art spaces around Bloomington.

“With our screenings, we try to make it a special night, as well, not just a movie but a bit of an event. We all believe films are best as a community event,” says Arena. “Since the beginning, the Indiana University Cinema has been nothing but supportive and helpful with our cause.”

IU Cinema also reached out to the IU Center for Rural Engagement to be a partner in this event. The center’s current mission is to work with regional organizations to implement innovative approaches to the opportunities and challenges facing rural Indiana. Together, they implement programs with critical areas of focus, including Healthy Hoosier Communities and Hoosier Quality of Place. Through these initiatives, the Center for Rural Engagement has begun introducing pop-up movie theaters in rural areas to screen movies with messages similar to Beautiful Boy, and leading discussions afterward with members of the community.

IU Cinema believes the synergy of these partnerships will create an inclusive and proactive environment for this screening. “In the end, I think the screening event and location we have collectively planned is better than anyone originally conceived,” says Vickers. “It should be a great community event.”

The screening of Beautiful Boy will take place at the FAR Center for Contemporary Arts, 505 W. 4th St. Tickets are available only at the door — first come, first served. Seating is limited to 150.