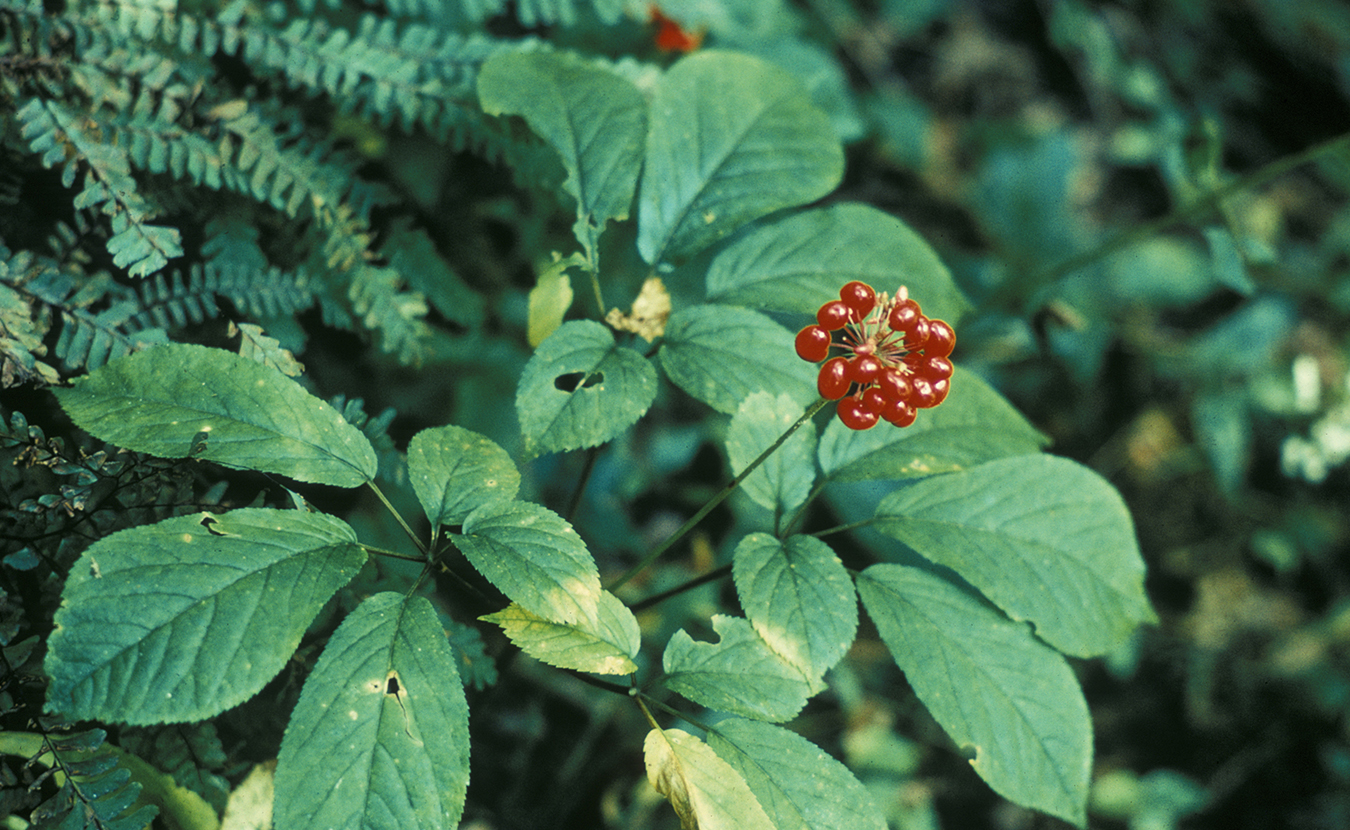 When it comes to their favorite morel hunting grounds, Hoosiers can be a protective bunch. But Indiana’s forests yield an even more valuable commodity this time of year. Prized for its stimulant properties and thought to improve digestion, boost immune function, fight aging, and much more, American ginseng (Panax quinquefolis) has fetched as much as $800 a pound. During our wild-ginseng harvest season — recognized annually from September 1 to December 31 — ginseng diggers coax twisted roots out of the loam to sell to certified dealers who, in turn, may sell this ginseng legally from September 1 through March 31 of the following year.

Last season alone, Indiana exported more than 7,800 pounds of ginseng — worth nearly $4 million. Most of the bundled, dried ginseng gets loaded onto Asia-bound container ships. “The majority of it ends up with the Chinese apothecaries,” according to Indiana Ginseng Coordinator Cary Floyd. “Some roots take on certain characteristics that make them look like old men. These can end up in boutique-type shops and can be extremely expensive.”

Ginseng by the numbers

Working out of the Indiana Department of Natural Resources, Division of Nature Preserves, Floyd keeps tabs on the state’s ginseng exports, right down to the average number of dried roots it took to make up a pound in a given year. (From his most recent annual report: “This year’s root count decreased to 298 roots per pound, a reversal of trend from 331, 325, and 352.5 roots per pound for the past three seasons respectively.”)

Why so much detail? “Reporting is required by law in Indiana,” Floyd explains. “Dealers’ [reported data] allow us to look at the state, determine how much [ginseng] is coming from which counties, and see how the state is doing.” Weighing dealer-provided information, along with weather data and anecdotal comments from harvesters and dealers, helps conservation officials decide whether or not Indiana’s wild ginseng population is being overharvested.

Now, technically, ginseng plants can live a long time. (One of the oldest on record lived more than 1,000 years!) But because ginseng roots are so valuable, they’re usually uprooted early in life — sometimes too early. Because a ginseng plant can’t reproduce until it is three or four years old, state law prohibits harvesters from removing immature plants. To reproduce, ginseng bears a cluster of berries that usually ripen in mid-August — before the start of the wild ginseng harvest season. Immediately after digging a mature plant, harvesters are also required to help repopulate the species by planting the ripened seeds from that plant.

Duncan estimates 95 percent of ginseng harvesters are acting as good stewards, but, he continues, “There’s five percent — which is probably the same five percent that’s digging out of season — that aren’t planting the berries. They’re just thinking about today. They’re not thinking down the road.” Wild ginseng from the Bloomington area usually ends up in apothecaries and boutiques in various countries in Asia. | Photo by Damien Dempsey, yarra64

Ask Judy Fulton about Appalachian Outlaws and she doesn’t hesitate: “Most of that show is just heavy BS!” A retired ginseng dealer, Fulton ran Fulton Botanicals in Bloomington with her husband, Phillip, for 26 years and believes the History Channel’s “reality” show about ginseng diggers and dealers has been terrible for business — and for Indiana’s wild ginseng population. “[The show is] just entertainment, but now everybody is out there hunting [ginseng], because they think it’s worth so much,” she explains.

Appalachian Outlaws is replete with extreme close-ups of piles of cash and diggers crowing, “There’s gold lying in those woods — all you gotta do is dig it up!” And the digging does seem relatively effortless. (Never mind that the TV diggers dramatically strap on guns before heading into the woods, and Blair Witch–style camerawork is liberally applied to manufacture suspense during scenes depicting trespassing.) Fulton says, “If you look really close, they’re digging dry root. They’ll show you a root they got out of the ground, but it’s not fresh. It’s not even green.”

Those roots might not be the only ringers. Duncan says, “I buy a fair amount of ginseng out of West Virginia, and I know the guys who work over there. When that show came into town, [the producers] approached all these dealers in West Virginia and explained to them how things would work. And the majority of the people who are on [the show] who are supposed to be digging the roots are actors — they’re not even real diggers. It’s all staged.”

Still, it must seem real enough. Floyd still fields calls from would-be diggers, and notes, “We see a lot of people who think this is easy. It’s not easy money at all.” Besides snakes and yellow jackets, harvesters are at the mercy of market forces. At $475 per pound, ginseng’s selling for much less this year. “Last year, the Asians overpaid,” Duncan says. “And there was a huge crop, due to the high price, so there’s surplus left over from last year. And … the Asian economy is struggling. Wild ginseng is a luxury item, so it’s one of the first things to go out of their budgets.”

There’s also a lot of red tape for dealers and potential risk for harvesters who are either unaware of the laws or simply unwilling to follow them. Harvesters may not remove ginseng from the Hoosier National Forest or from any state-owned land. Ginseng can only be harvested from private land — and only then with the landowner’s permission.

Indiana Conservation Officer Angela Goldman says, “It’s one thing to be out there looking for [ginseng] and get caught — that’s hunting without consent of the landowner — but, then, if they actually take ginseng off of the property, that’s stealing. So they can be charged with theft as well.”

In 2014, there were 49 enforcement actions for hunting ginseng without landowner consent, 68 for possession of ginseng out of season, 15 for illegal harvesting, and two for dealing without a license. “So far, in 2015, we’ve made 61 ginseng cases,” Goldman adds. “We’ve seen a significant upward trend on the number of arrests that are being made.”

Because ginseng is also a federally regulated plant, it is subject to the Lacey Act. That means it can’t cross state lines without proper certification. “Certification is required to record the pound and ounces taken from a particular county for a load of ginseng,” Floyd says. “The original copy of that certificate is affixed to that bundle and must stay with that bundle or it does not leave the port of New York or the port of San Francisco. It will not leave the United States. Without that certificate, that ginseng is effectively not eligible for trade.”

So far, so good

Perhaps the laws are working. Or those Appalachian Outlaws fans found a new get-rich-quick scheme. To date, ginseng populations have remained stable or increased in 84 of Indiana’s 92 counties. “We have down years because of drought,”Floyd says.” We have up years — like last year, which was just phenomenal. But we have yet to see any downward trend in the long-term health of the [ginseng] population. There is a stewardship ethic that the majority of harvesters follow. It’s a wonderful tradition.”