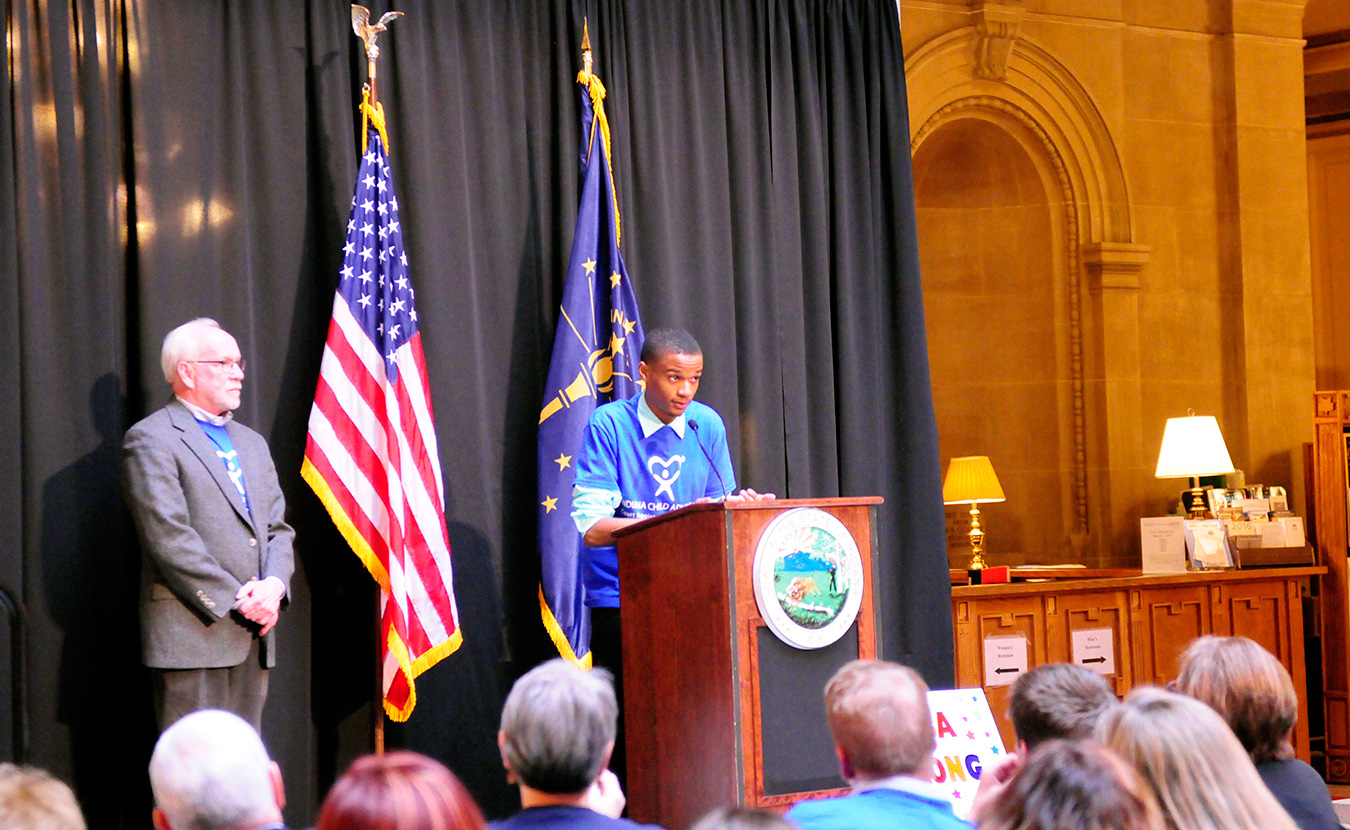 Dorian Phillips shares his experience in the Monroe County CASA program at the CASA Day rally at the Indiana Statehouse in March. His CASA of three years, Jim Shelton, stands with him in support. | Photo by Ann Georgescu

The crowd in the Indiana Statehouse roared as Dorian Phillips finished his speech. He smiled and waved in appreciation and then turned to shake hands with Governor Mike Pence and Indiana Chief Justice Loretta Rush before exiting the stage and disappearing into a sea of blue T-shirts.

The 19-year-old was speaking at the state’s CASA Day rally in Indianapolis in March, representing Monroe County and sharing his experiences in the program. By Phillips’ side was his CASA of three years, Jim Shelton.

Court Appointed Special Advocates, or CASAs, are volunteers and everyday citizens who advocate for abused and neglected children. They are committed to ensure each child has consistent representation and a familiar face, while wading through an overburdened and complex legal system. Children in Need of Services, or CHINS, range from zero to 18 years of age, with more than half under the age of five. CASAs are committed to ensure each child has consistent representation and a familiar face, while wading through an overburdened and complex legal system. | Photo by Ann Georgescu

CASAs are the direct link between a child and the variety of representatives from the Department of Child Services, counselors, social workers, legal representatives, and caseworkers. For any child, but especially the younger ones, being separated from parents and shuffled from stranger to stranger is a frightening experience.

CASAs also serve as voices to the more vulnerable children in court. Although there is a shortage of CASAs statewide, each one stays with the case until it is closed — when a child is in a safe and permanent home.

Phillips entered the foster system as a high school sophomore when his mother — who was homeless and in and out of jail for probation violations — came to realize that she could not provide for her son and surrendered him into foster care.

Shelton, a retired physicist, became Phillips’ CASA six months after he entered the system. Over the course of their time together, Phillips saw a lot of turnover in what was supposed to be his support network. Shelton was his only constant.

“To complicate things further,” says Shelton, “the five foster families were scattered all around the county and he was going to Bloomington [High School] South.”

Teachers were beginning to lose patience with his late arrivals, late homework assignments, and declining grades. “Within one month, I moved three times,” says Phillips. “Teachers weren’t always sympathetic and enforced rules as usual.” By the end of his senior year, Phillips was four credit hours short of graduation. His caseworkers and counselors were ready to give up on him.

Finally, with Shelton at the helm, Phillips found himself among the right combination of counselors, caseworkers, tutors, and, finally, a foster home where he felt at home.

Phillips calls them his “Dream Team.”

“Dorian is very bright,” says Shelton. “So between the Dream Team, his smartness, and just showing up, he was able to earn his last four credits in the summer. He makes it sound like it was easy, but it wasn’t.” Phillips is now a freshman at Ivy Tech Community College and plans to major in political science. “When I registered at Ivy Tech, I felt like I had made it,” says Phillips. “I thought, I can finally relax now.”

Now that Phillips is 19, he has aged out of the DCS system. But he has elected to participate in a collaborative-living program that allows him to access support services that help him get settled outside of foster care. He also continues to live with his foster family and makes frequent visits to see his mother, who, he says, is doing better.

Shelton and Phillips still meet regularly and enjoy any opportunity to heckle each other about politics. “He loves to talk politics,” says Shelton. “Just don’t get him started talking about ‘the Bern.’”

Phillips believes that having a CASA had a huge impact on his success. “There is the complicated DCS system and the complicated court system, and Jim makes sense of it,” Phillips says. “That is where Jim shines.”

Phillips says he knows of many kids who would benefit from having a CASA, but there is still a shortage of volunteers. In 2015, there were 450 reported cases of child abuse and neglect in Monroe County. The county has approximately 105 volunteers but needs at least 50 more advocates to cover everyone on the waitlist.

Abuse in Our Community

At the Monroe County CASA office, visitors are often greeted by two spirited pups that plow lovingly into your shins. Once you settle into a chair, Manny, a dachshund, and Gracie, a Boston terrier, are off to chase each other and tumble down the hallways. The dogs help lighten the mood for the staff that hears case after case of immeasurable neglect and suffering.

Monroe County CASA Director Kristin Bishay says the most important message she has for the community is that there are children who need help.

“Prosecution for child abuse is minimal,” she says. “There is approximately one case per year. Yet, children are made into paraplegics and vegetables because of abuse, but it’s hard to prove. No one knows what happened.”

“The abuse that’s happening in our community,” she continues, “is no different than in big cities. Think of the movies, think of what you hear about in New York City, Chicago, or on a television show like Law and Order. The same things are happening in our small community. The influx of heroin use in Bloomington has had a huge impact. There [has been] a 35 percent increase in [child] abuse since last year, and it’s not going away.”

Bishay admits that being a CASA is not for everyone, but it is also not as daunting as people often expect. The organization has a rigorous screening process, and once volunteers are selected, they complete a 30-hour training program. After volunteers are assigned to a child, they have the full support of a case coordinator.

Over the years, Bishay has heard story after story from young children:

“I tried to wake Mommy up.”

“There were needles on the floor.”

“There were strange men in the house.”

“I had to sit outside while Mommy was in the house with her friends.”

Beth Kaszynski is a graduate student in communications and culture at Indiana University — and a CASA. She grew up with foster kids and saw how scary it was for them to move through the system. Once she had enough time to volunteer, she signed up. “I think that anyone who is interested in protecting children and advocating in the legal system should consider being a CASA,” Kaszynski says. “The work is sometimes hard and can certainly be emotionally taxing. However, you are never alone in the system — CASA provides extensive support. And at the end of the day, you know that you have worked to make sure that children don’t fall through the cracks in the system. Being a CASA means that the child you advocate for has a voice in court.”

Kaszynski’s most recent case closed with a successful reunification. “The kids were able to go back home,” she says.

CASA’s standard philosophy is to reunite children with their families whenever possible. Extensive rehabilitative programs and services are provided for parents by the courts and, as a result, 80 percent of the children in Monroe County return home.

At the end of the Statehouse rally, Chief Justice Rush led volunteers from across the state in a chant: “CASA strong!” Then she invited volunteers to the microphone to share an experience:

“I visited a child in Riley Hospital who was recovering from abuse inflicted by a guardian. I am a CASA.”

“I collected donations for a child who was heartbroken after he lost his new backpack because his house was condemned due to meth. I am a CASA.”

“I helped a child enroll in college. I am a CASA.”

“I arranged for siblings who had been separated to meet at a park to play together. I am a CASA.”

“I had a sex offender removed from the house of a child. I am a CASA.”

There are nearly 3,500 CASA volunteers in 78 counties and about 23,500 abused and neglected children in Indiana. There are still more than 5,000 children waiting for a CASA volunteer and who do not have a voice in court.

When Phillips graduates from Ivy Tech with his political science degree, he plans to address two key social issues that are near to his heart. One is to help keep young black men out of legal trouble, and the other is to address issues that plague people experiencing homelessness, such as addiction and job loss. After Phillips won over the crowd at the CASA rally, Chief Justice Rush all but offered him a job. Regardless, without a doubt, as soon as Phillips turns 21, he will become a CASA.

“I think everyone should get involved in CASA,” says Phillips. “I feel like they do what everyone else is supposed to be doing. They are a mixture of everybody in just one person.”