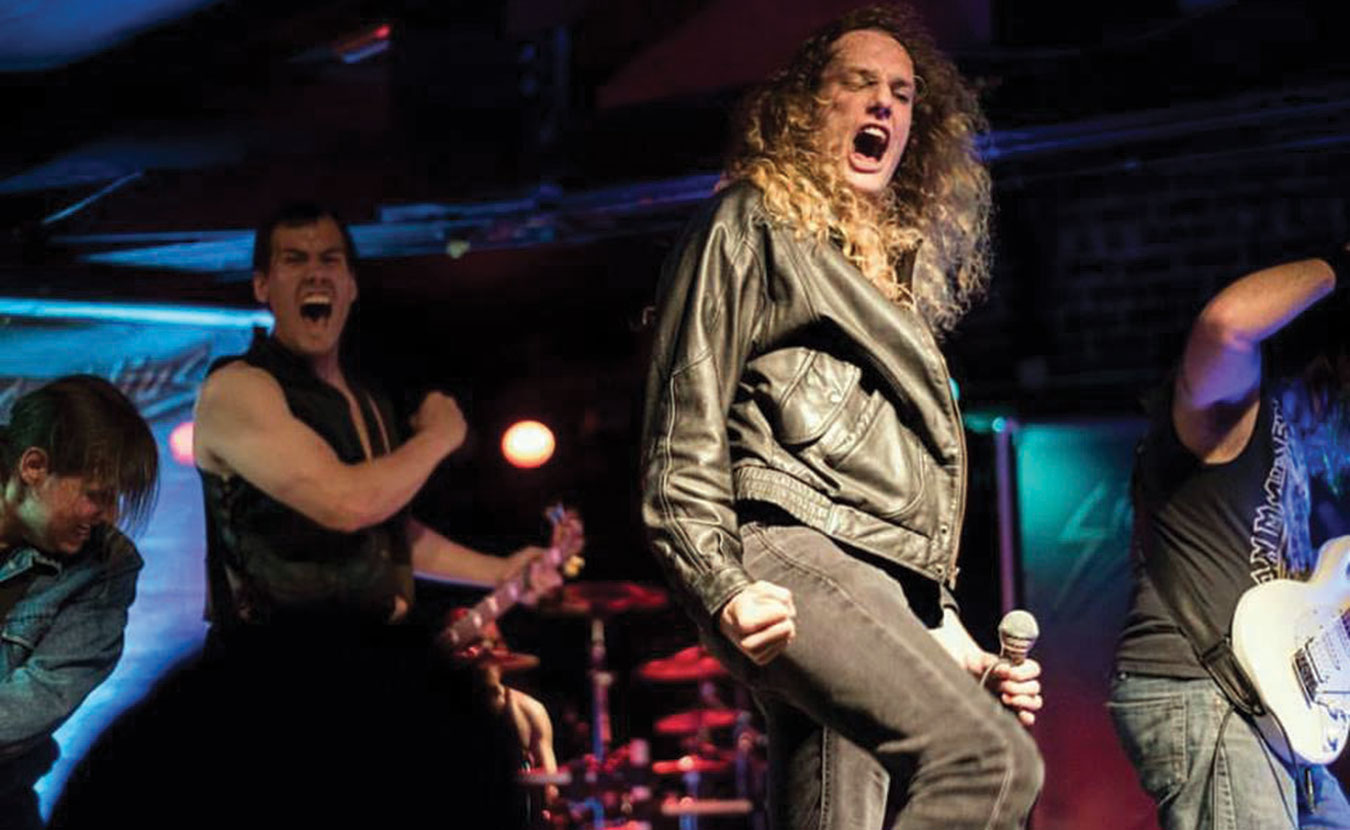 Scattered among piles of kick drums, mic stands, and guitar cases, a dozen people sit cross-legged on the concrete floor of local music venue The Void. On stage, Ethan Helfrich drags a violin bow across his guitar. A single candle burns at his feet. His ambient, meditative solo project, Rest You Sleeping Giant, has his audience transfixed.

Later that night, Siddius frontman Hayden Frasier takes the same stage. Bare chested and brash, he whips his long hair over his shoulder as he paces the floor. “This whole building is my stage!” he shouts before launching into an epic heavy-metal wail. The band accompanies him with a massive, distorted melody.

While these two performers may have little in common, both call Bloomington home, and they’re just two examples of the assortment of genres found in our homegrown music scene.

Folk artist Justin Vollmar discovered Bloomington’s thriving scene when he came down from Anderson, Indiana, for a summer internship with record label Secretly Canadian during college. “It’s really diverse and has a strong independent vibe,” Vollmar says. “I feel like there’s lots of different factions but they’re all working together.”

These different factions have thrived for a long time in Bloomington basements, pubs, and recording studios and represent the defining elements of Bloomington’s music scene. From underground punk to old-school blues, Bloomington is a musical melting pot, with some groups finding their roots decades back in B-town history.

On the surface, Bloomington has a notably successful history of music. Local legends and international stars like Hoagy Carmichael and John Mellencamp are revered throughout the city. Hoagy — who left Bloomington after college — wrote extensively about his hometown (especially the jazz scene of the 1920s) in his memoirs, and Mellencamp — who has had a residence in Monroe County for decades — honored the town by holding the premiere of his musical collaboration with Stephen King, Ghost Brothers of Darkland County, at the IU Auditorium in 2013. And despite national and international recognition, local singer/songwriters Krista Detor, Jenn Christy, and Carrie Newcomer (who just put out a new album, The Beautiful Not Yet, and plays at the Buskirk-Chumley Theater on October 15) continue to make Bloomington their home base.

All these factors give B-town the appearance of traditional, commercial success when it comes to our music. But the story of music in Bloomington also has a strong alternative edge.

John Strohm, former guitarist for The Lemonheads, helped ignite Bloomington’s punk-rock scene during his high school years in the late ’80s. He and his “punkster” friends were hated for their army boots, spiked wristbands, and outrageous haircuts. He says the independent scene of the time was hard-fought but well worth it. “It was a way for outcast kids to find community and fit in somewhere,” Strohm says. “It was very liberating to be able to do things for ourselves — but it was super important for all of us to form community and accomplish things.”

But it’s not just the punksters who have a flourishing underground history in Bloomington. Longtime locals, the members of Siddius have been bringing their symphonic brand of heavy metal to the scene for more than ten years.

“We really wanted to do something more than just your average thrash band but still wanted the allusions to traditional metal,” Siddius keyboard player Andrew Welp says. “So the music evolved into something more grandiose.”

The band’s love for thrash mixed with the training in audio engineering and guitar theory by guitar player Khalid Stetkevych creates the signature, intricate arrangements that make them stand out from within their genre. This sort of musical synergy, as well as genre-hopping and -bending, are common themes among independent bands looking to find their own sound. Bloomington musicians form a tight-knit community, too, and often bands will share members. A drummer on stage at the Bishop one night might be seen playing rhythm guitar with another band at the Bluebird the next night. The Bloomington music scene — especially the pop-punk vein — consists largely of a network of multitalented friends.

Aaron Denton and Ben Lumsdaine, of local power-pop duo Spissy, mix jazz drumming with catchy hooks to form their meticulously crafted pop sound. Lumsdaine’s training as a jazz student at Jacobs gives their music a technically proficient edge. Such academic influence has been a factor in shaping the sound of underground Bloomington. With approximately 1,600 students enrolling in Jacobs each year, the ideas and inspiration are constantly turning over.

Dan Coleman has been the talent booker for The Bishop for the past decade and has watched the Bloomington scene change over the years. “We’re a town full of transient people doing transient things,” he says.

The past two years have seen a resurgence in community awareness for local music — especially in the underground scene, Coleman says. “It’s getting people to finally look at it beyond just a hobby. It’s a new mentality which has made things better.”

Thanks to this shift in mindset, Coleman says Bloomington has been able to foster a strong DIY music community and sustain venues such as The Void. “People made a space for things to happen in a way that they didn’t used to,” he says.

Back to the roots

Aside from the underground musicians, Bloomington has a strong history of classic blues that goes back decades. The Players Pub has been hosting weekly blues jams for more than ten years. These jam sessions give local blues enthusiasts like Eric Gaylord the chance to meet other like-minded musicians in town. It was here in 2010 that Gaylord was able to hand-pick the future members of Bloomington’s blues band Fistful of Bacon.

“I’ve learned so much from the people I’ve watched here at the Pub,” Bacon guitar player Marvin Druin says. “The caliber of musicianship in Bloomington is really staggering. There’s a high concentration of talent in this town.” Fistful of Bacon performs at the SCI Blues Society’s one-year anniversary at the Player’s Pub. | Photo by Sierra Vandervort

In an attempt to further establish the blues in Bloomington, Gaylord and his wife, Nancy, started the South Central Indiana Blues Society. With more than 180 members, the society works to support and promote local artists while educating the public about the history of the blues.

“We’ve drawn people in from lots of different areas — and they’re eager for it,” Nancy says. “They’re eager for a community that will support them, and we have that here, much more than any other town I know of in Indiana.”

The love of B-town

This appeal of community spirit in Bloomington provides a conducive atmosphere for artists of any genre and gives them the ability to flourish. “There are places to play and there’s an audience that revolves,” Spissy’s Denton says. “If you’re willing to accept them, they’re there for you.”

While the Bloomington scene may encompass a wide variety of genres, its central character isn’t lost. A lot of local music is not only characterized by its budding talent, but also its humble authenticity. “There’s something very Midwestern about it,” Denton says. “It goes at its own pace — sort of complicated but really easy to swallow.”

Regardless of musical tastes and preferences, Bloomington provides a community that is supportive and flourishing.

“It’s a really vibrant scene,” Vollmar says. “I’m always hearing people say ‘Man, there must be something in the water over there.’”

Sierra Vandervort is a freelance journalist and author and is currently finishing her degree in journalism and music at Indiana University. She has experience in online and print media, but her focus is magazine and feature writing. Sierra loves adventuring, reading, writing, and discovering new, independent art and music. She's also strangely obsessed with Spider-Man and is always dancing — even though she says she's terrible at it.
Tagged
Comments