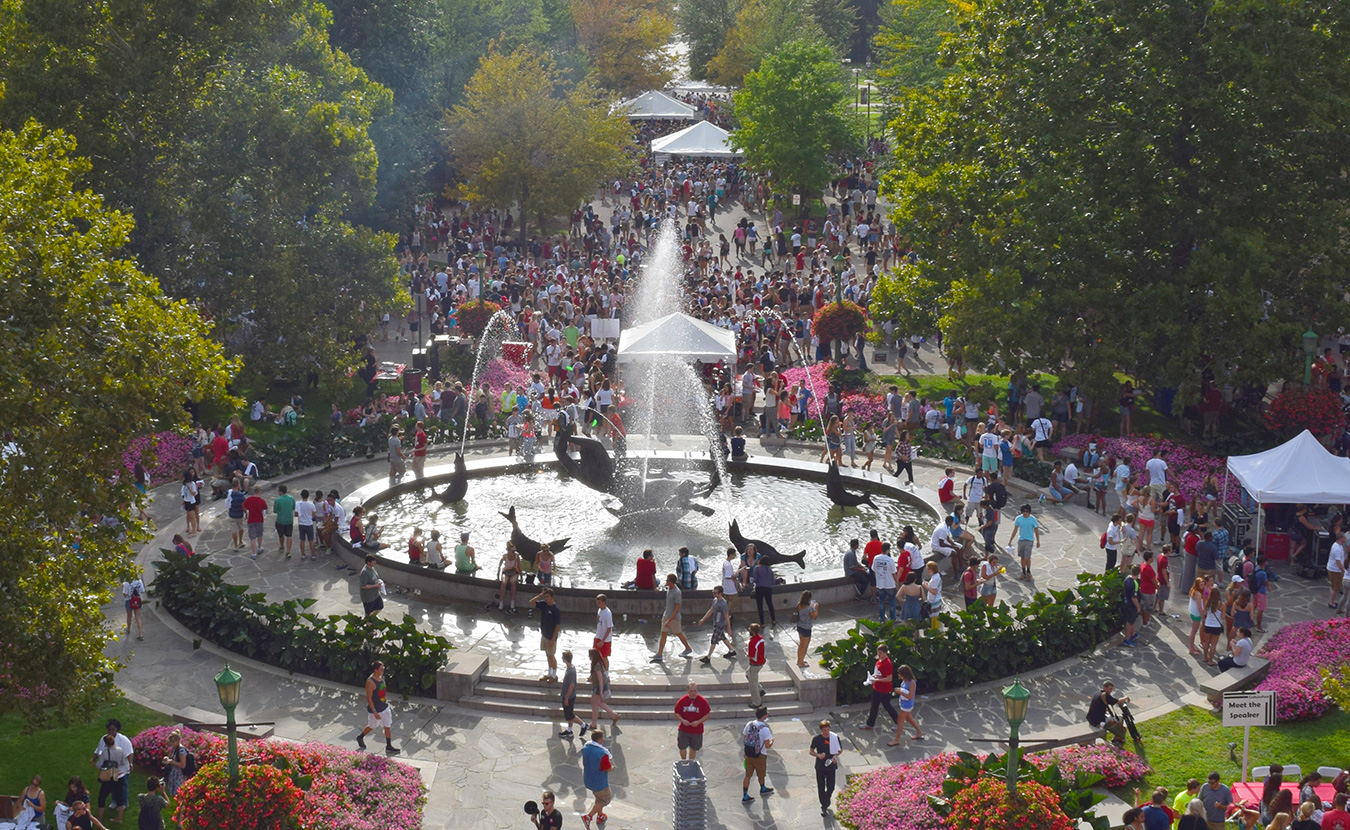 The Indiana University Arts and Humanities Council has created the First Thursdays Festival at Showalter Arts Plaza — a monthly event that will “celebrate and showcase” a range of arts. | Photo courtesy of IU Office of First Year Experience Programs

With some of the Midwest’s best museums, artists, and thinkers right here in Bloomington and on the Indiana University campus, the IU Arts and Humanities Council decided to celebrate these treasures by throwing a party — every month. Thursday, September 1, is the kickoff of First Thursdays Festival, a collection of the best arts — both fine and fun — that Bloomington and IU have to offer.

This free event, which is open to everyone (not just students), will take place from 5 to 7:30 p.m. at Showalter Arts Plaza on the first Thursday of almost every month during the school year. Venues across campus, including the IU Cinema, Eskenazi Museum of Art, Grunwald Gallery of Art, The Lilly Library, Mathers Museum of World Cultures, Jacobs School of Music, and the Department of Theatre, Drama, and Contemporary Dance, will also participate with events at their locations.

The IU Arts and Humanities Council has assembled a variety of Hoosier art for its inaugural First Thursday Festival — from award-winning poet Adrian Matejka to local weirdo-pop Brenda’s Friend to the Lotus Education & Arts Foundation to arts and crafts and treasure hunts. Many tents and booths will offer hands-on crafting, informational sessions, opportunities for group discussion, and more. As Ed Comentale, associate vice provost for arts and humanities, wrote in Inside IU Bloomington, “We wanted to create an event that will let you sample all that our campus has to offer in small bite-sized portions. Most of the acts serve as previews for that evening’s or the month’s performances. An Italian aria, a Balinese puppet show, a Cuban jazz quartet, a mini-lecture on Audubon — here’s your chance to sample it all.”

With so much going on at once, Showalter Plaza might sound like a bustling place, but Comentale says it’s also designed to be a casual affair. “Stop by after work or class, hang out on the lawns or in the galleries, unwind, enjoy the setting, the sounds, the smells. … We’ll have blankets and books on hand for those who just want to settle in and relax.”

Both campus and local caterers will offer the top cuisine in town — at a college student’s budget. For the inaugural event, for example, Bloomington’s beloved chef David Tallent will serve tacos and other street food, fruit on a stick, and roasted sweet corn with chili lime mayo and cotija cheese.

This week’s festival also serves as an opportunity to see the museum’s new Rainworks installation. The rain-activated street art, which was invented and commissioned by artists Peregrine Church and Xack Fischer, is the largest of its kind in the world. Though Rainworks is invisible when dry, a good rain shower will cause the massive work named Mandala to appear on the plaza in front of IU Eskenazi Museum of Art. Because the art museum is celebrating both its first year under a new name and its 75th anniversary, Abe Morris, manager of public relations and marketing, says, “We wanted to create an evening-hours program for students, young professionals, and others in the community who can’t typically visit the museum during the day because of work or other commitments. First Thursdays is designed to be both social and educational and a perfect avenue for people who don’t typically come to the museum to learn about art in a fun and social way. It is also designed to be an event where the Bloomington and IU community can mix and mingle and you can meet someone new.”

Morris says they have prepared many activities to coincide with the First Thursday events, including scavenger hunts, live music, free refreshments, and “Take Ten,” a group activity in which ten people spend ten minutes together discussing a piece of art, led by either a museum docent or art history student. “You get to learn about how to look at and analyze artwork while meeting nine other people at the same time,” Morris says.

Regardless of what the students are studying or what projects Bloomington residents are working on, Morris says the arts are a unifying force that helps us think critically. “A college degree is about preparing for a career and learning skills that will help you on the job market, but it is also about how to look at the world critically, not take things at face value, and dive into the deeper meanings of the human condition, and how our world works,” he says. “Exploring the world of art is a fantastic way to hone those skills, which can be a benefit in almost any educational discipline.”

No Replies to "IU to Showcase Artists with Massive Monthly Festival"