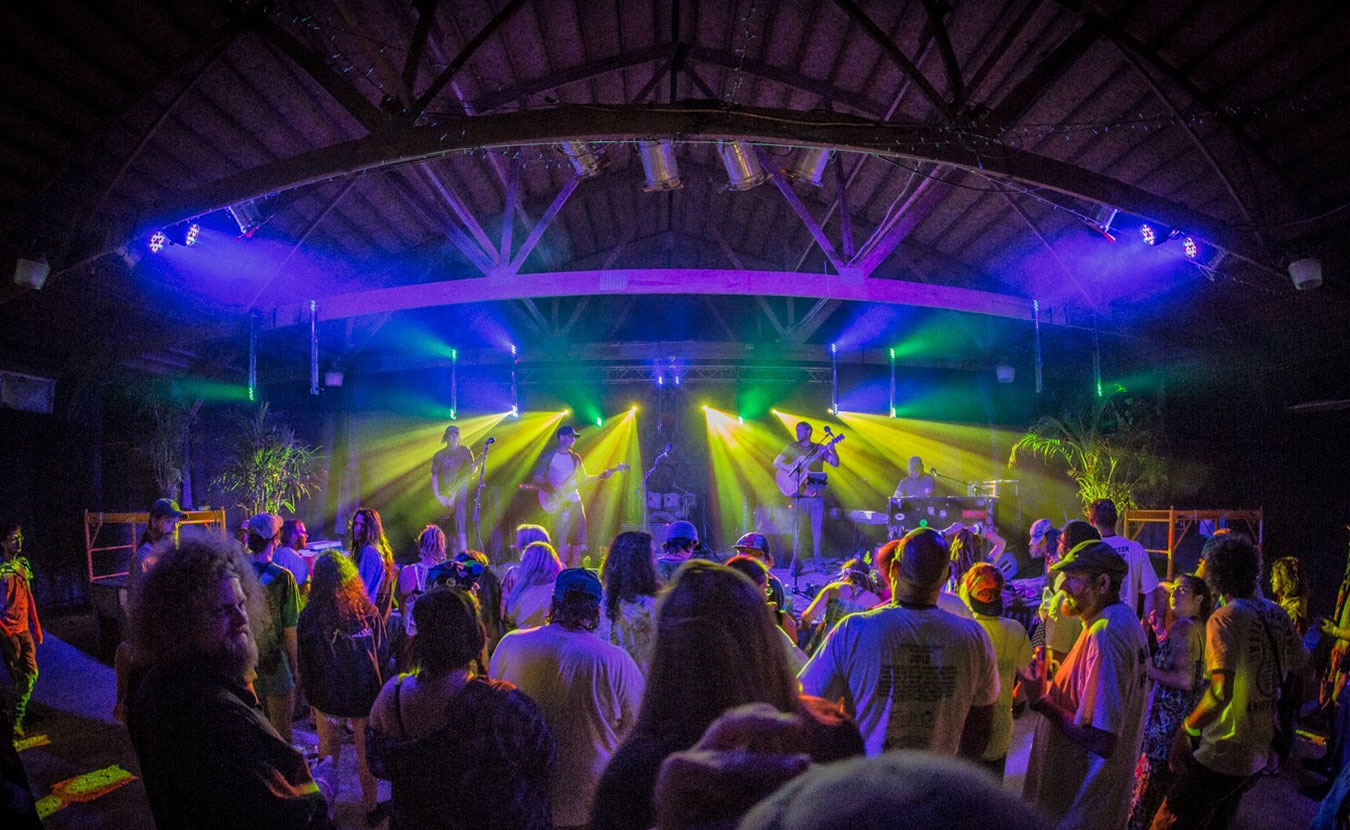 On a stage equipped with state-of-the-art sound gear, with a professional crew turning the nozzles, and under a sheet-metal roof engulfing a crowd of eager onlookers, stands EmiSunshine. At thirteen years old, the East Tennessee singer-songwriter — who is “equal parts Americana, Bluegrass, Gospel, and Country, with a sprinkle of Blues” — is the headliner on the first night of Good People Good Times, a summer festival of jam bands, bluegrass, folk, and rock. The venue, Stable Studios, includes a 17,000-square-foot pavilion and 55 acres worth of lazy willow trees, shallow ponds, and a thicket of woods that, at times, houses a small city of campers.

“Y’all wanna hear me yodel?” Emi asks the crowd playfully. Five hundred voices throw back an affirmative, shaking the rafters above. Emi lets ’em have it, tossing back her head and letting out a ripping yawp. She’s on the cusp of becoming a big-name artist, on one of her early stops of an international summer tour — a rural footnote in the south-central Indiana countryside.

In 1978, Chris Kinnick, an excavator out of Zionsville, Indiana, bought a stretch of property just west of Spencer, in Owen County. There, he built a home for his family and a horse stable for his wife, Laura, where she bred and trained world champion Morgan horses for nearly 20 years. However, Laura’s horse-rearing gave way to dreams of going back to school, and the stables were left empty in 2005. A year later, Chris came up with an idea — use the abandoned facility for music. Kinnick had always been a musician, playing saxophone in a number of bands over the years. Now he had a space where he could not only make music himself but also give local artists a place to showcase their talents.

Stable Studios is a multi-use venue, with an indoor music hall as well as the grand stage and recording rooms. | Courtesy photo

What began as small sessions in the stable’s front office soon became an operation. Removing the horse stalls and building stages at either end of what was once the horses’ training grounds, Kinnick and his daughter, Jessica, created a multi-use venue. They constructed an indoor music hall with a full kitchen and bar, several soundproof recording rooms, artist lodging, and even a load ramp at the back of the stage.

The initial idea was to use the space primarily for recording. Jessica began attending live shows and inviting bands to The Studio, pitching it as a moderate- to value-priced recording studio to be rented out, mainly for the creation of full-length albums, and with lodging provided if necessary. Stable Studios began offering both daily and weekly rates, and bands such as Opal Fly & Kapow, The Roosters, Shaggy Wonda, and other artists took advantage of the opportunity. However, Chris and Jessica soon realized that few bands had the time or money to come out and record for what they hoped would be weeks at a time. They changed their blueprint and started hosting live sessions, starting with “open jams” in the wintertime that jumped from 20 spectators to over a hundred for a small entrance fee.

With appearances from the likes of The Wailers and Bill Kreutzmann, it seemed the transition was working, and the growing live venue became the perfect candidate for festivals. “We started in 2008, doing our first small festival, which was four bands one Saturday afternoon,” says Jessica. “And it’s kind of just grown from there.”

Wuhnurth, a festival previously held just north of Indy, moved to Stable Studios in 2010, and the Good People Good Times festival has now been there for two consecutive years, growing from 700 guests at its previous Brown County location to between 1,000 and 1,200 guests this year. Stable Studios is a family-run operation. Kinnick, Laura, Jessica, and her husband, Michael, as well as their five children, can be found on the property most days. The children, between ages 8 and 16, often lend a helping hand as vendors, landscapers, and ticket checkers. There’s also a larger “Stable Family” made up of four couples — friends of Jessica and Michael — who act as festival and event staff.

With festival season winding down for winter, Stable Studio now hosts “open jams” every first Friday of the month. Doors open at 6 p.m. and the entrance fee is $3. Attendees are offered food, drinks, and live music in an intimate atmosphere. Bands and artists are encouraged to bring their own instruments, but a house drum kit, amps, and PAs, as well as a professional sound and light crew, are provided. The show continues until all who want to play have gotten their chance.

And the Studio still draws abundantly talented bands, such as Bloomington’s Opal Fly & Kapow, who will be performing at The Studio on December 16.

Grayson is an Indianapolis native with a penchant for adventure to foreign lands, testing the limits of the human body, and enjoying wonderful moments in the company of good friends. He has an English degree from DePauw University and has worked as a research guinea pig, a cupcake truck driver, an ESL teacher, a Christmas tree salesman, and a writer (among other things). On any given day, he is likely indulging in very positive, life-affirming philosophies, as well as creating his own.
Tagged
Comments