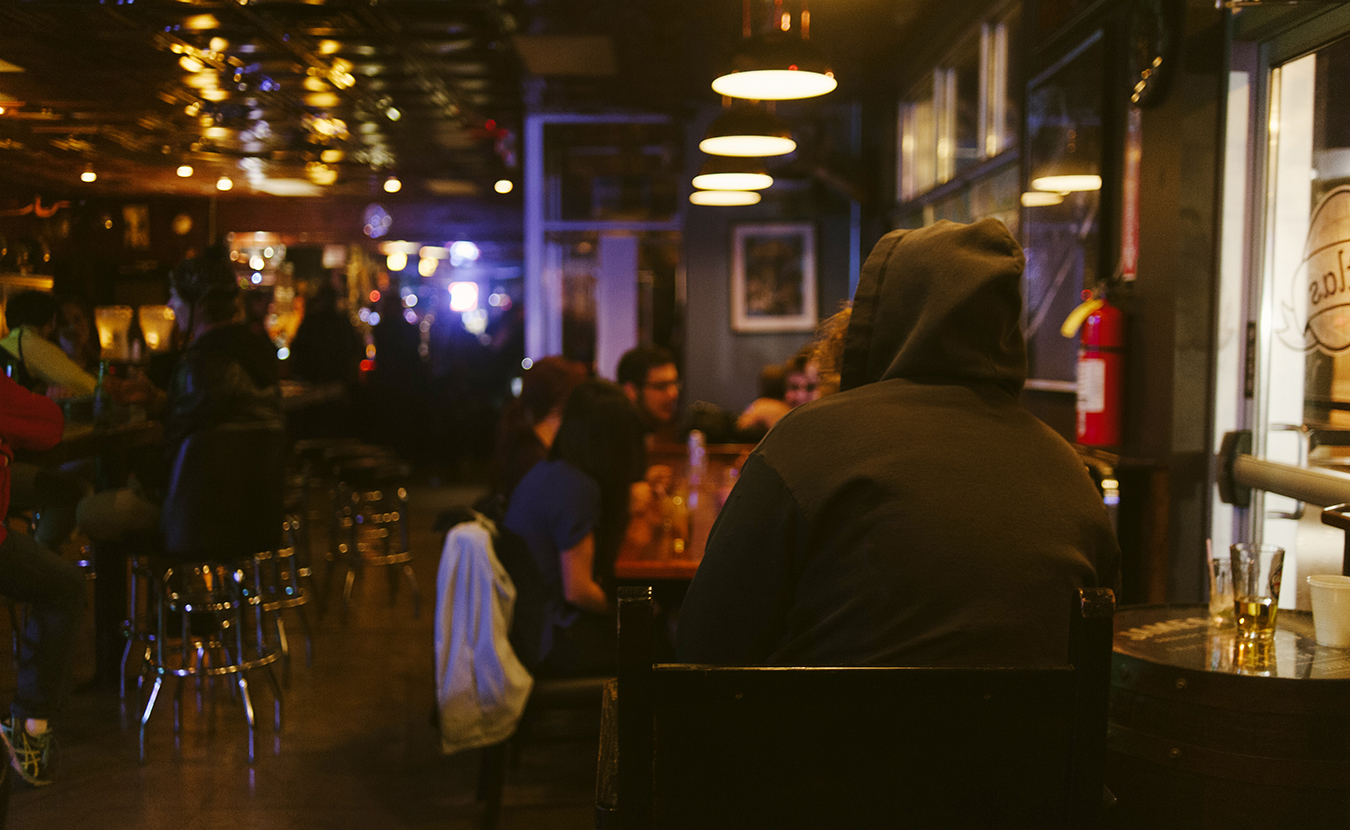 Many local bars have staff members responsible for intervening in situations that appear to be dangerous. For example, The Atlas Ballroom says it hires more door staff per square foot than any other bar in town. | Photo by Natasha Komoda

“There’s a fine line between social lubricant and bad-idea juice,” says Nicci Boroski, manager and co-owner of Bloomington bar The Back Door. “If I’m going to take the responsibility of opening up a space with alcohol, which does often lead to sexual assault, it is my responsibility to mitigate that risk as best I can.” All three bar managers strive to cultivate an environment that isn’t conducive to aggressive behavior. This sign greets patrons of Atlas at the door. | Photo by Natasha Komoda

In Indiana law, felony sexual battery occurs when one person, to satisfy their own sexual desires, touches another person who is either compelled to submit to the touch by force or by threat of force, is unable to consent to the touch by virtue of disability, or is unaware that the touching is occurring; the severity of the felony escalates if the person is under the influence of controlled substances. Alcohol is not considered a controlled substance, and, therefore, nowhere is its role in sexual consent made explicit in legal terms.

But alcohol and rape are linked, says Evelyn Smith, prevention programs coordinator at Middle Way House. “When people talk about date-rape drugs, they’re usually talking about ‘roofies,’ or GHB [gamma-Hydroxybutyric acid], but the single most common date-rape drug is just alcohol. This, itself, is a huge indicator of where violence is likely to start and where it’s likely to happen.”

Colleen Sutton, administrative director of The Atlas Ballroom, and Dylan Swift, manager at Nick’s English Hut, agree with Boroski that nobody wants their bar to be a place where sexual assault happens. But staff of all three bars agree: Figuring out how to cultivate a safe space is more art than science.

“There’s always responsibility that comes with selling a legal drug,” Sutton says, “and situations around consent, sexual consent, and sexual harassment can be so murky, it can be difficult to discern exactly what our role and responsibility is.”

“In a college town and in the bar life, we have to use our common sense of things that we’ve seen over and over — our common sense as the sober people who are serving drinks,” Swift says. “I can never really say, ‘Looks like she’s going to be sexually assaulted,’ or, ‘Looks like he’s going to be sexually assaulted.’ It’s just, if you see things that don’t look right, you have to take care of it.”

In all three bars, risk is managed by combining thoughtful approaches to security with maintaining an atmosphere that, managers hope, doesn’t encourage aggressive behavior. But neither of these things is easy to do.

Security is arguably the more straightforward approach: Every bar has staff members responsible for intervening in situations that appear to be dangerous. Sutton is proud that Atlas hires more door staff per square foot than any other bar in town. Swift says that Nick’s hires a lot of ex-military: “They’re not guys who are looking for a fight, by any means, but they’re not afraid of it.” Still, security staff need to know when, and how, to intervene in situations where a person’s sexual consent is at risk of violation. “Training bar staff is an important first step,” says Smith. “Particularly in identifying shady situations. A common reason people give for not getting involved in something is that they’re not sure what’s going on, they’re not sure they’re reading it properly, and they just feel awkward.”

The Back Door and Atlas have both done intervention training with Middle Way House, which they say was positively received by their staff. Swift says that since Nick’s hires a lot of students and, as a result, has a high staff turnover rate, arranging for this kind of training wouldn’t have much long-term impact.

Patricio Battani took part in the Middle Way House training at the Back Door. He holds a master’s degree in public health, specifically in behavioral, social, and community health. He also runs the Back Door’s drag shows under the stage name Argenta Perón and runs social media for Atlas. Good sexual-assault-intervention programs aimed specifically at bar staff don’t exist, Battani says. While he appreciated the Middle Way House training, “it was very bystander-intervention, as though we were patrons,” and didn’t acknowledge the fact that bar staff can’t simply walk away from their responsibility to serve their customers. “In a college town and in the bar life, we have to use our common sense of things that we’ve seen over and over — our common sense as the sober people who are serving drinks,” says Dylan Swift, manager of Nick’s English Hut. | Photo by Natasha Komoda

The other problem that comes from overemphasizing intervention in bars is that it can make the spaces feel inhospitable. Nick’s prides itself in serving all parts of the Bloomington community. “The hardest thing about cutting people off is: We might cut you off and prevent you from committing crimes down the road — that’s one side of it,” Swift explains. “But the other side of it is, ‘We don’t like the way you look. We don’t like the way you’re acting.’ That turns into another very serious problem very quickly, because then you start getting into profiling, and you get the reputation that you don’t want to serve this type of people or that type of people.”

More important to all three bar managers, then, is to cultivate an environment in their bars that simply isn’t conducive to any kind of aggressive behavior.

The approach at Nick’s is simple: “We have a lot more seats than most bars, because we believe that if you’re sitting down, you can’t bump into each other and start anything that way,” Swift says.

Sutton says that Atlas works to cultivate a clientele that’s older than the student population and intends to stay in Bloomington for a longer period of time. This, she says, gives the regular clientele a sense of ownership over the place.

“There’s a Facebook review of Atlas that makes me so happy, and that was not the person’s intention.” She pulls it up on her phone and reads aloud: “‘The staff is great, but unfortunately some of the patrons are hipster douchebags. While chatting up an extremely drunk woman, she volunteered that another patron had identified me as dangerous. So if you enjoy random women cock-blocking you, this is the place for you.’ And our response to that was, ‘Absolutely, yes. You’re trying to hit on a really drunk woman? Then, yeah, we have a community of people here who are going to protect each other.’”

The Back Door is perhaps the most vocal in promoting its stance about sexual consent: Argenta Perón closes every drag performance with a reminder to the audience that “consent is the most important part of sex.” A banner just inside the main entrance to the bar reads, “Consent is sexy,” and a nearby poster proclaims, “Sexual predators will be publicly shamed and handed over to the authorities.”

The signs aren’t large, but they’re prominently placed. Boroski explains: “I think it empowers our clientele to know that they can say something if they see something, either to us or to them directly. I think a lot of the problems that we have in Bloomington’s drinking culture are because there isn’t agency within people’s peer groups to speak up so that bad shit like rape doesn’t happen or violence doesn’t happen.” The Back Door has a variety of signs to help patrons feel more empowered to speak up if they see something going on. | Photo by Natasha Komoda

If the Back Door seems to be the most vigilant in this area, it’s not without good reason: About a year after the bar opened, Boroski was notified by Middle Way House that four different incidents of sexual assault had originated in some capacity from the Back Door.

“That was horrifying to me,” she says, “I couldn’t have that on my conscience, and did not want my bar to be that place.” This was the event that inspired her to arrange the training with Middle Way House. She required all of her staff to attend and invited staff from other bars in town, and had participants from both Atlas and The Bishop.

She hasn’t heard of any more assaults originating from the Back Door, and hopes that it means the bar’s response to the problem has had a positive effect.

“It keeps me awake at night,” Boroski says, “It really does.”