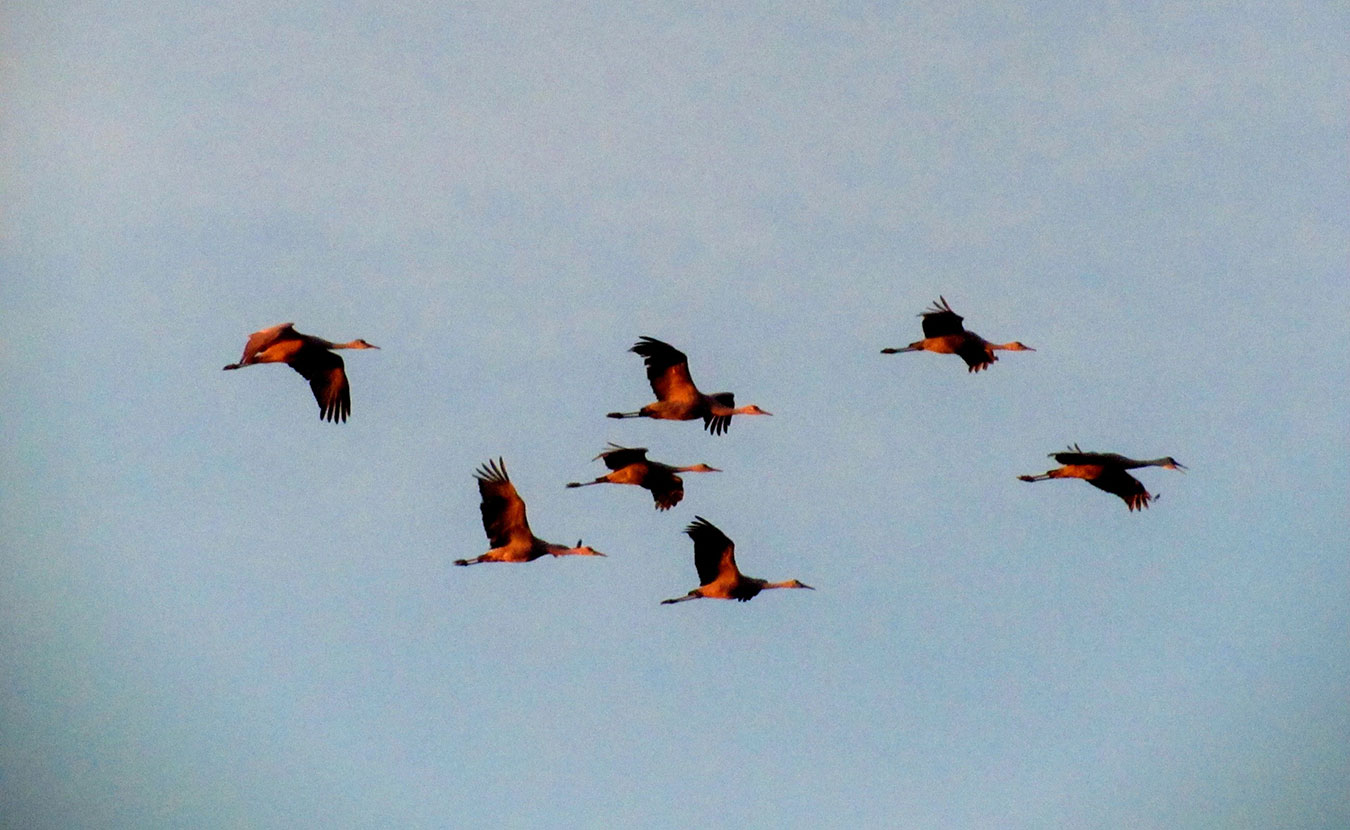 Every spring and fall, Indiana is at the heart of the eastern sandhill crane migration. Witness it once and you’ll mark their return on your calendar every year, writes LP contributor Jared Posey. | Photo by Katie Posey

Two hundred years ago, John James Audubon saw the Midwestern sky clouded with birds. A passenger pigeon migration flew over his head for three days while he traveled by horse along the Ohio River to Louisville. These gregarious pigeons once tallied an astonishing population of three to five billion on this continent. A century after Audubon’s ride, they numbered exactly zero, becoming one of the ghosts of extinction, a sober reminder that man can wipe away abundance. Today, once-endangered sandhill cranes still glide across the thermals of North America in their faithful migration, teamed up in the thousands. The large birds fly in “V” formations, their ancient calls echoing above both cities and countrysides. Luckily for us, we don’t have to leave the state to witness this prehistoric spectacle. Indiana is at the very heart of the eastern sandhill crane migration, every spring and fall. Witness it once and you’ll be writing their return on the calendar every year.

The bulk of these birds make their springtime appearance in Indiana from mid-February to early March, after wintering in Florida and Georgia (quite literally snowbirds). They make a pit stop in our marshlands and fields, chomping on bugs and waste corn to fuel the rest of their journey. They then follow their built-in compass north to their nesting areas in Wisconsin, Michigan, and southern Canada. Before they leave, they showboat in the skies of the heartland, in mesmerizing flocks both spirited and serene.

In the early 2000s, Goose Pond wasn’t much to see — not even a pond. For decades the swampy earth in western Greene County had been dredged and drained in futile attempts to farm the land. Fast forward the clock: The 9,000-acre U.S. Fish and Wildlife area of restored ponds and wetlands, a little more than an hour southwest of Bloomington, is a conservation success. A new visitor center marks this change, with a spectacular view of many of the area’s new residents — most notably, snow geese and sandhill cranes, each in the tens of thousands during migration.

It’s enough fun to throw a party, so the locals do. Marsh Madness is a two-day sandhill crane festival organized by Friends of Goose Pond in nearby Linton. March 2-3 of this year, Linton will be howling with tours, grub, presentations, and exhibits — all to celebrate the area’s natural beauty, and to call attention to the migration of sandhill cranes and other waterfowl.

At Goose Pond, it’s better to see the sandhill cranes at this time of year than in the fall. Then, from mid-November to early December, the best place is Jasper-Pulaski Fish and Wildlife Area. This Indiana hotspot is just under three hours north of Bloomington. With tens of thousands of them congregating there, Jasper-Pulaski is the most important stopover point in the Eastern U.S. for sandhills. Whether spring or fall, Indiana is smack-dab in the middle of majesty. Sandhill cranes have white heads with a distinctive red patch, black feet and beaks, and a white and gray body. | Photo by Katie Posey

What to see (and hear)

Sandhill cranes stand about chest high to the average adult human, with a wingspan maxing out at around seven feet. Their white heads are capped with a distinctive red patch. With black feet, black beaks, and a white and gray body, they extend their necks and legs when they fly — a mile high above the land.

Sunrise and sunset are the magic hours to observe them during their migration stopover. The cranes are amped to feed in the mornings, and, in the hour after sunrise, they branch out to fields and wetlands to score their sustenance. Flying from their roosts, they form cliques, calling to each other (and apparently to everybody else), as their bodies and their trumpeting calls fill the air. Sandhill cranes fly in “V” formations as they come to roost for the evening at Goose Pond. | Photo by Lynae Sowinski

The cranes return to their roosts in the same manner in the hour before sunset. All the cranes fly back in, put out their landing gear, and start to think of sleep. While they’re beautiful to watch, many observers comment on what a sensory treat it is to the ears. It is hypnotizing, haunting, musical. Author Kim Heacox writes, “If loons invented the music of being lonely, cranes invented the music of being together.”

Every year we see more parking lots and apartment buildings, and fewer wildernesses. Yet, renowned conservation biologist E.O. Wilson points out that just 12,000 years ago, the American plains were richer in wildlife than the African plains are today. Though living in the modern Midwest, you’d be forgiven for not believing it. Perhaps that’s why we need the sandhill crane: to believe.

They may have something to remind us. The sandhill crane’s Midwestern population was at the existential brink in the 1930s, with a mere 20 or so individuals. The U.S. Fish and Wildlife Service estimates the number today is closer to 80,000. Whooping cranes were on the brink of extinction in the 1940s, and only about 600 are alive today. These three were spotted in the wetlands at Goose Pond in February 2016. | Photo by Lynae Sowinski

Sandhill cranes may be doing fine in population statistics, but stopover sites like the wetlands in Indiana can help to secure their fate. Their cousin, the whooping crane, also benefits from our protection. Their population was in the teens in 1941, a close call to joining the passenger pigeon in extinction, but whooping cranes have now regrown their population to over 600 birds. Goose Pond is a great location to catch a glimpse of the still-endangered whooping crane. The federal duck stamp can be found at post offices and refuges. It raises money for migratory waterfowl.

Travis Stoelting, property manager at Goose Pond, says buying hunting and fishing licenses is one way that the public can help with crane conservation. These licenses fund state agencies in charge of maintaining these stopover habitats, to maintain water levels, and to keep the wetlands from becoming a forest. Another option is to purchase what’s called a federal duck stamp, which can be found at post offices and refuges and raises money for migratory waterfowl.

Many locals haven’t even heard of Goose Pond, much less their frequent guests. In asking Stoelting if this impression is accurate, he says, “Yes, but people are learning about it quickly. The population is growing, and they’re getting hard not to notice. Even in the city, they’re flying overhead, and more people are recognizing them.”

Flocks of sandhill cranes are a potent symbol of wildness, viewable twice a year in Indiana over our heads. We need them, and they need us. We need their inspiration, and they need us to restore their wetlands. They fly indiscriminately over our worlds — over countryside and cities, across forests and concrete jungles. They fly as dependably as the seasons, their loud, rolling chatter overhead, urging us back into the natural world, calling us home.

Jared Posey was born and raised in Elwood, Indiana, and graduated from Purdue University. He’s interested in mindfulness, the food movement, conscious parenting, and connecting kids to nature. Jared created and ran an alumni interview series between Elwood High School and the Elwood Call-Leader. He has written for TAKE ROOT magazine and self-published a book called Will Work for Food: A Book of Inspiration, Poems, and Edible Action.
Lynae Sowinski