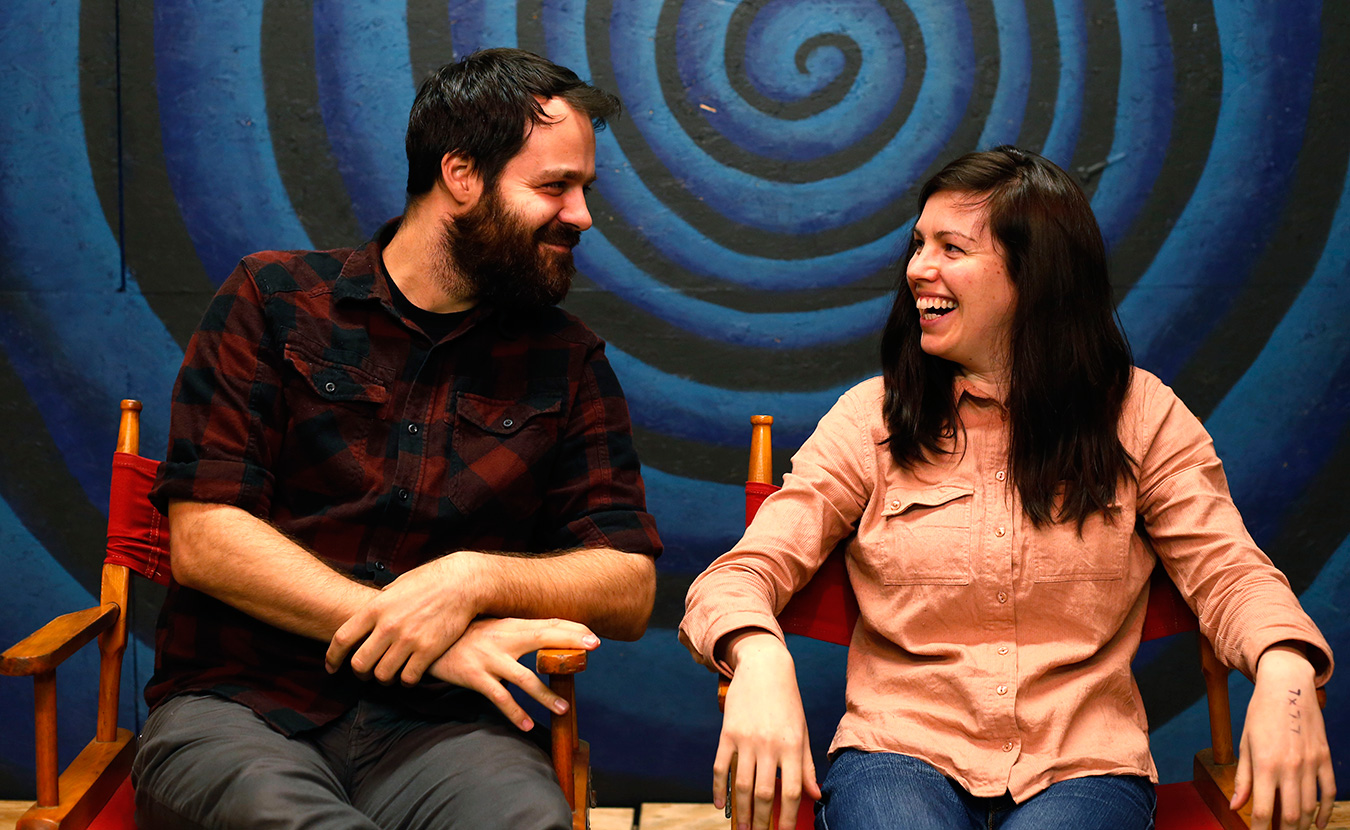 After seven years of screening 700 films in various venues, houses, and restaurants without missing a month, Eric Ayotte and Charlie Jones are presenting their Instant Gratification Movie Challenge at the Buskirk-Chumley Theater on June 5 at 7 p.m. To celebrate, Ayotte and Jones are showcasing some of the best work ever submitted, in addition to their monthly challenge submissions.

Each month, Instant Gratification challenges filmmakers to shoot a short film based on a theme, word, or phrase, such as “By All Means” and “You Wish.” Since 2009, this “Call-to-Create” has pushed filmmakers to put out new material. The theme for their anniversary is “Big Deal.” [Editor’s note: Check out two interpretations of the theme “Cliffhanger” below.]

With this being the first of what they hope will be many screenings at the Buskirk-Chumley, I sat down with Ayotte and Jones to ask them about Instant Gratification.

Jaeger: How did the Instant Gratification Movie Challenge begin?

Ayotte: Initially, it started off as an episode of a cable-access television show [CATS] we were doing called Cob Job. We were doing weekly screenings at the Curiodrome [now Plan Nine Video], and they have a small screening room in the back. We told people we were going to have these short films, and way too many people showed up for that screening room. It was a ton of fun, and I always wanted to do this monthly challenge sort of thing. Immediately after that, I was working at Rhino’s [Youth Center], so I had a venue and a space to do it. So we had our main home for the first five years, with random screenings here and there. It’s fun to mix it up.

Jaeger: What made you want to celebrate the seventh anniversary of Instant Gratification at the Bus-Chum?

Jaeger: What makes the Instant Gratification Movie Challenge different from other film festivals?

Ayotte: The key to Instant Gratification is that it’s not a competition, and the judgment is really low. That opens the door to a more genuine approach to filmmaking. Whether it’s someone who labels themselves as a filmmaker or someone who just wants to make a video, it takes the pressure off, and I think the final product is often more impressive and exciting. When you go to a competition, you’re not actually watching the other films the same way. You’re judging them, whereas here you watch all the movies and you get to laugh and enjoy the films in a way where you wouldn’t if there was a cash prize or accolades.

Jaeger: You guys have gone seven years without missing a month, right? How?

Ayotte: Growing up in a DIY punk scene, I’ve always had this idea that, of course, you just do it. I feel really fortunate to be conditioned in that. I just think it’s necessary to have a due date and a deadline and a place to show things.

Jones: It’s a circle that generates itself. It’s inspiring to see these films, so then you take part the next month. It sounds cheesy, but it’s naturally really supportive. Someone could come that has never experienced it before, and it’ll feel that way. I think that’s just because of the way it’s set up, because it’s not a competition.

Jaeger: How do you guys keep coming up with new themes each month?

Jones: When we first started, it often would be more of a phrase rather than a theme, which can be interpreted in so many different ways. It’s a good starting point as inspiration for a film, rather than “rom-com” or something like that. Lately, we’ve actually changed the system, where we put a sheet of paper out for people to put suggestions down and have a vote at the end of the screening. This way, it feels more random and that we’re all picking it together.

Jaeger: Why do you guys choose to not watch any of the submitted films before the screenings?

Ayotte: A lot of it was to keep the night really fun and spontaneous and to keep the deadline literally that night so people can just come in with a thumb drive. Personally, I like experiencing the films with everyone in the same way that night.

Jones: The instant gratification of watching it after you finish it — which is where the name comes from — is also bringing back something I’m really interested in, which is keeping live cinema alive. We could all just sit at home and watch each other’s films on YouTube, but that’s so sad to me that that’s how things are.

Jaeger: Why is Instant Gratification important for the Bloomington community?

Ayotte: A lot of focus in the education of film is this idea of money being the most important thing. That’s sad to me. One, this thing is just really fun. The content is the most important part. But on a larger scale, this conversation about content first and keeping the fun in the filmmaking is just as important.