Plight of the Honeybee — Beekeepers Save Bees for Us All 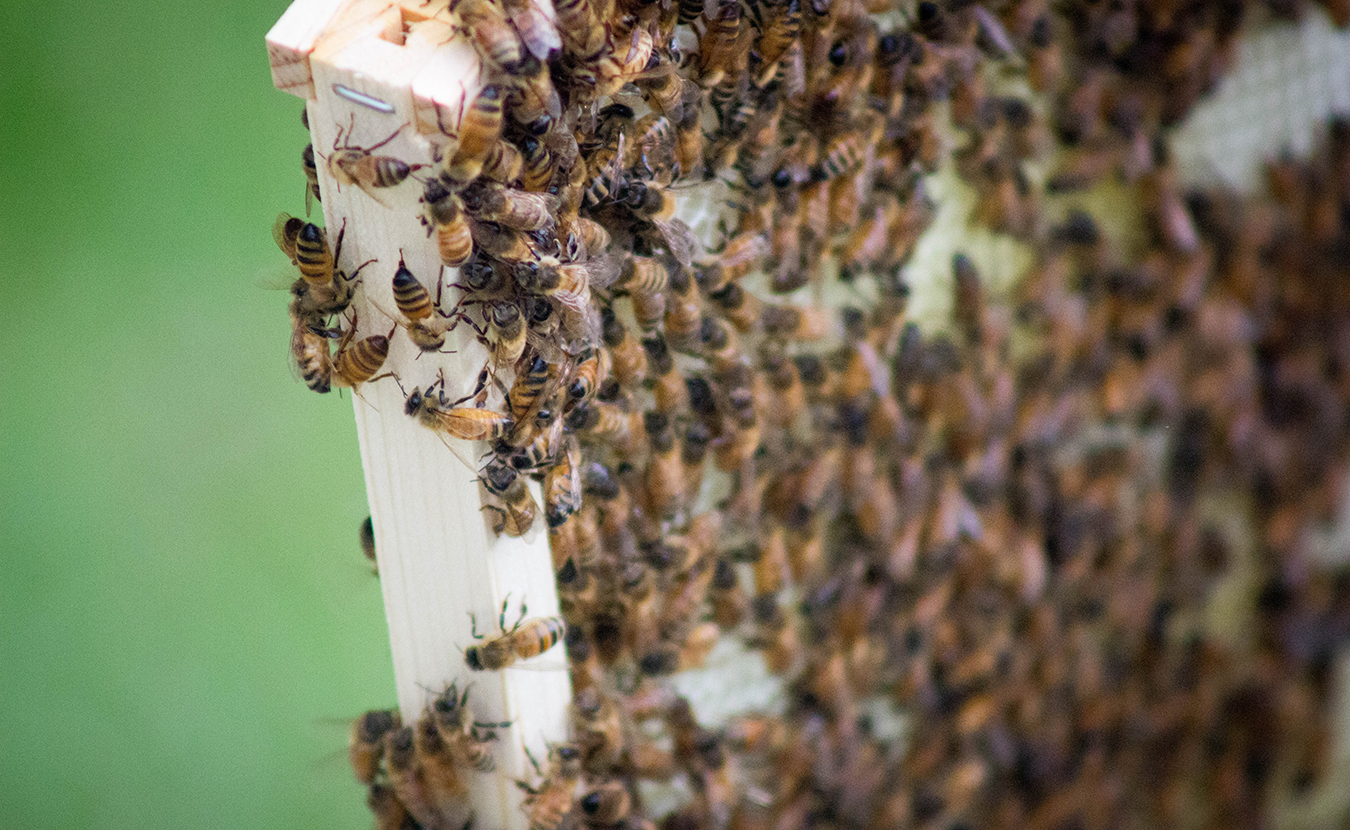 The plight of bees could also be the plight of the human race. When writer Erin Hollinden decided to start her own beehive, and save the world, she found plenty of support from a community of experts and other beekeepers. Here, Hollinden's bees cover one of the frames lifted from the hive. | Photo by Marla Bitzer

I love almonds, so I’m concerned about the future of bees. One of every three bites of food we eat (and all the almonds in the world) depends on honeybees and other pollinators. This story only scratches the surface of the importance of bees in our biosphere — like tiny canaries in our global coal mine. It’s more about my friends helping me start a sunny, stirring, humming hobby so that I can feel like I’m helping save the world with only about 30 hours’ effort each year.

In preparation, I went to my friend Barbara Restle, a lifelong environmentalist in her 90s, who keeps two hives at Meadowood Retirement Community. Among other literature Barbara shared with me was the March 2017 edition of Discover magazine, which says that Indiana and the nation lost about 40 percent of our bees from 2015 to 2016. The article goes on: “Colony losses [have reached] a pace that threatens the beekeeping and agricultural industries — and everyone who eats. Bees pollinate some $30 billion in U.S. crops each year, including most fruits and leafy greens, playing a critical role in human health.” 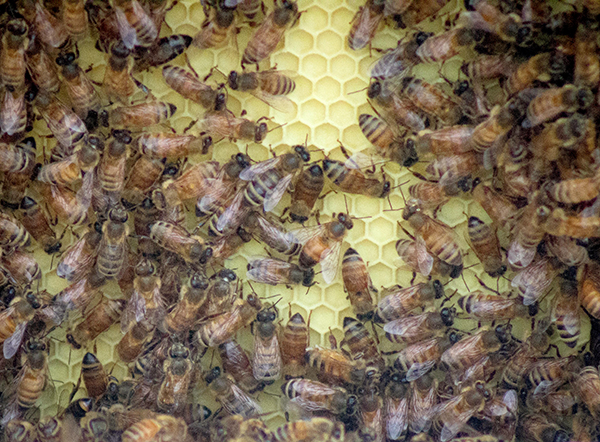 One photo accompanying the article showed a bee born with crumpled wing virus. It reminded me of photos of babies born with tiny, shriveled limbs in the 1960s, due to their mothers having taken thalidomide. That bee photo brought tears to my eyes. I have to save bees from crumpled wing virus, I thought.

But as a kid, I ordered Sea-Monkeys in the mail and felt ripped off when they turned out to be only brine shrimp. I wondered, Will bees be much different?

To learn more, in April I visited my neighbor Scott Markson, who has two hives. He removed some honeycomb and showed it to me under his microscope. In the bottom of each hexagonal cell, a just-laid egg stood on its end, looking like a grain of rice, less than two millimeters long and .4 millimeter wide. Each queen bee lays 2,000 to 2,500 eggs per day, he told me. In other cells of the comb, two-day-old eggs lay on their sides; four-day-old larvae were curled up, visibly breathing; and a few hexagons were capped with yellow beeswax — inside were larvae spinning cocoons around themselves.

Just as I started thinking, Maybe bees are more exciting than Sea-Monkeys, I saw something under the microscope that horrified me even before Scott told me its name: a Varroa destructor, a parasitic mite that kills bees worldwide. Seeing that mite raised a response akin to finding a tick on a child: It’s a tiny insect just trying to survive, but it incites a murderous hatred. I have to save bees from Varroa destructors, I thought. 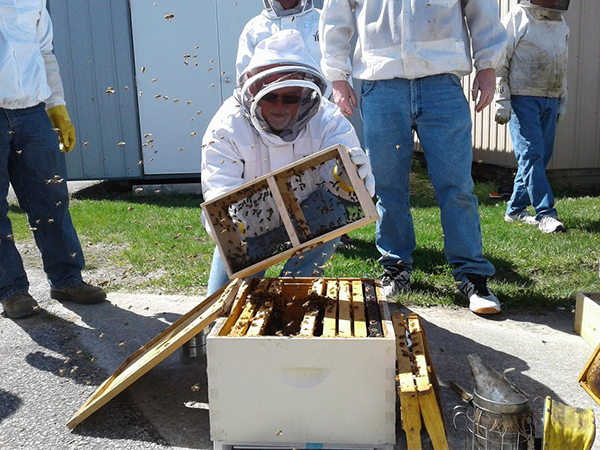 A bee expert puts bees in a deep hive body at the Bedford Bee Intensive in April. | Photo by Marla Bitzer

Also in April, my beekeeper friend Tim Bitzer and I attended the Bedford Beekeepers Club’s Bee Intensive at the Lawrence County Fairgrounds — a hands-on field day where hundreds of people learn about bees and buy bee stuff. Tim said his beekeeping class years earlier was “like a fraternity, because everyone has such respect for bees, and you can all call on each other for advice.” We got the same vibe from the Bee Intensive people, many of whom are involved in Beekeepers of Indiana.

Among the experts who taught my beginning beekeepers’ class was Dave Branneman, who cautioned us about believing what we read on the internet. He emphasized that “if you get five beekeepers in a room, you might get six different opinions.” Minutes later, bee-buffs around the room testified that the best time to work with your hive is early in the morning. Or late in the evening. Or in the warmest part of the afternoon. Some folks say not to eat a banana before working with the hive, because isoamyl acetate in bananas smells like the alarm pheromone that calls bees into fight mode. Others say that’s bogus.

Our other teacher, Jeff Lubker, said, “The first thing to know about bees is, What you think ought to happen doesn’t happen.” Jeff lost 16 of his 17 hives last winter. He recommends starting with two hives, so you can compare how they do. He said you might get no honey your first year, or you might get a lot. 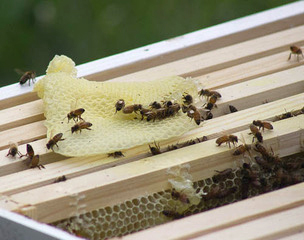 One week after the colony was moved to the new hive, the bees had already made honeycomb. | Photo by Marla Bitzer

Things I learned at the Bedford Bee Intensive include:

I ordered a complete hive kit consisting of wooden boxes (called deeps and supers), boards, covers, frames, and hardware. And I ordered my bees — the more docile Italian ones. Tim already had two bee suits, a smoker (to calm the bees), and a hive tool (which is like a miniature crowbar).

When the hive kit arrived, my husband painted it with primer and white paint. To make a stand, my son-in-law brought limestone scraps from the quarry where he works. We must keep the hive off the ground to discourage skunks from raiding it, and tilted slightly forward to keep rain out. I faced my hive east, so the bees will get a sliver of sunlight through their entrance in the early mornings, and in full sun to prevent hive beetles. Dave and Jeff recommended erecting a windbreak west of the hive. Instead, I placed mine at the foot of a steep hill at its back — a hill that will be covered with milkweed, goldenrod, and asters. I secured the hive to the limestone stand with a cargo strap and placed a bucket of water nearby. To prevent bee drownings, I floated a handful of straw on the water, so they can crawl out. 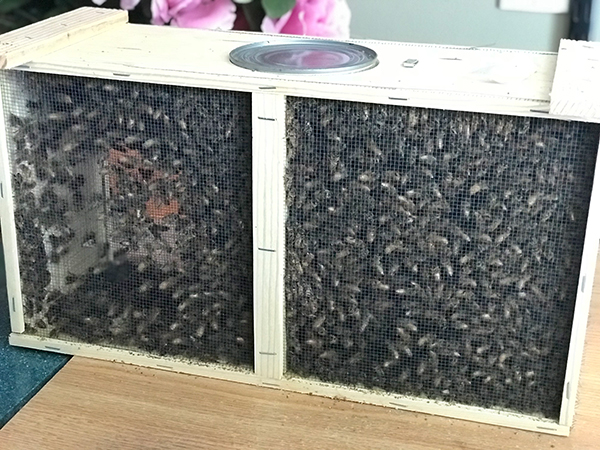 Erin’s new bees came in this package, with the queen in the metal container in the middle. | Photo by Marla Bitzer

In early May, I picked up my package of bees from California via Bastin Honey Bee Farm in Knightstown, Indiana, two hours northeast of Bloomington. Driving home through the sunny afternoon, I started thinking of the bees as “my girls.” At first I had my car windows open to smell the lilac and honeysuckle blooming, anticipating how my girls would love them. But then I closed my windows to let their resonating hum fill the car.

Tim and I suited up to install our colony in its new home. We needed all four of our hands for this. Tim’s wife stood by with a camera and a spray bottle of water to calm the bees if needed, since Tim forgot to bring the smoker. We opened the package by removing the tin can full of bee food that blocked the opening. Tim reminded me to move slowly. Prickling with excitement, I extracted the queen’s cage — about half the size of a pinky finger — and reinserted the can to keep the other bees in. With a nail, I dug out the plug at the end of the queen’s cage, careful not to let the queen escape, and Tim swiftly replaced it with a mini marshmallow. The workers would eat through this to release their queen. Tim inserted the queen’s cage between the removable plastic frames inside the bottom deep (or lowest box) of the hive — frames on which my girls would soon build honeycomb. Then we once again removed the can and began dumping the bees in after her. I felt frantic but amused, nervous for their wellbeing, but fascinated by how devotedly the bees followed their queen. As the whirling cloud of bees grew around us, I laughed, safe inside my astronaut’s suit. 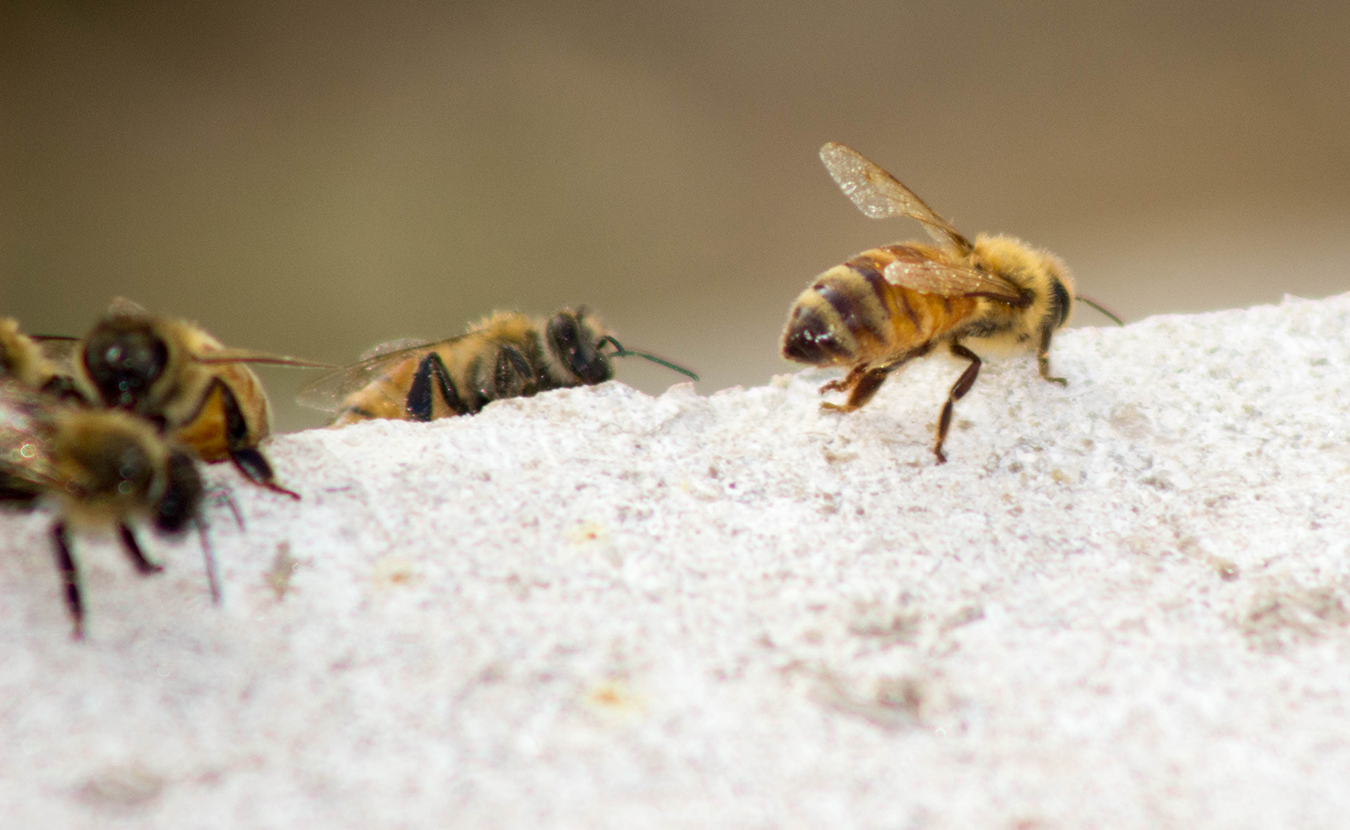 Hollinden’s bees will explore an area in a three-mile radius from their hive. | Photo by Marla Bitzer

We set the upper deep on top of the lower one, unavoidably crushing several of my girls, and placed the feeder on top, crushing more. We filled it with a gallon of water mixed with eight pounds of sugar (applying the adage “A pint’s a pound, the world around”). I placed the two lids on top of that, and we stood back to watch the bees who had been shut out figure out how to get in through the small opening in the bottom of the hive. We’ll make the opening larger once they are well established and ready to defend the entrance against intruders.

The next morning, I couldn’t wait to see how my girls were doing. At 7:15 a.m., I found a few dozen sleeping on the outside of the hive and stand. At first I worried, then I remembered finding sleeping bees all over my flowers most summer mornings. I listened closely to the hive. Silence. I tapped on the outside — like a parent who wakes the sleeping baby just to be sure she’s okay, I thought. Nothing. It was only 7:15. 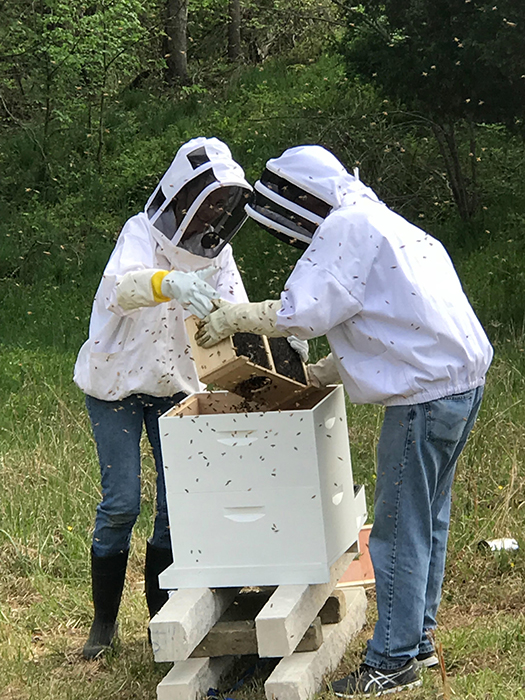 When I drove to work, I noted the location exactly three miles down the road from our house. This is the farthest they will fly, I thought, and resolved to care not only about my own patch of land, but about everything in that three-mile radius: Monroe Lake, the Deam Wilderness, my neighbors’ places — the health and profusion of all was now my concern.

At noon, I got a text from my husband: “Lots of activity at the hive. They look busy.” When I got home at 9 p.m., the sun was below the horizon, but it was still light outside. I could hear the hive humming as a few dozen stragglers found their way home after a full day reconnoitering their new domain. I stayed, watching and listening, until the fireflies came out. In the following days, we were happy to see them working — if bees appear lethargic, something is wrong.

After a week, we will open the hive to look for eggs — evidence that the queen is okay and all is well. We are optimistic. I’m letting my grass grow extra long between mows, with plenty of clover and dandelions blooming — my girls’ favorite foods. And I’m beginning to see every flower, pebble, and piece of roadside trash from a bee’s point of view.

Meanwhile, happily, on the last Friday in April, the European Union banned the use of neonicotinoids or neonics, the worst bee killers and the most widely applied insecticides in the world. (I have to save bees from neonics, I thought.) In Indiana’s Statehouse in January, Representative Pat Bauer authored House Bill 1012, which would require a pesticide review board to adopt rules prohibiting the use of neonics in our state. The bill died in committee, but we could all ask our representatives to try it again.

By the time the neonics ban takes effect in Europe at the end of 2018, I will have survived my first summer of beekeeping. And let’s hope my girls will have survived it too, with un-crumpled wings beating 230 times per second, humming.