Quaff ON! Brewery ‘Abides’ in Nashville, Expanding Its Production and Adding a Distillery 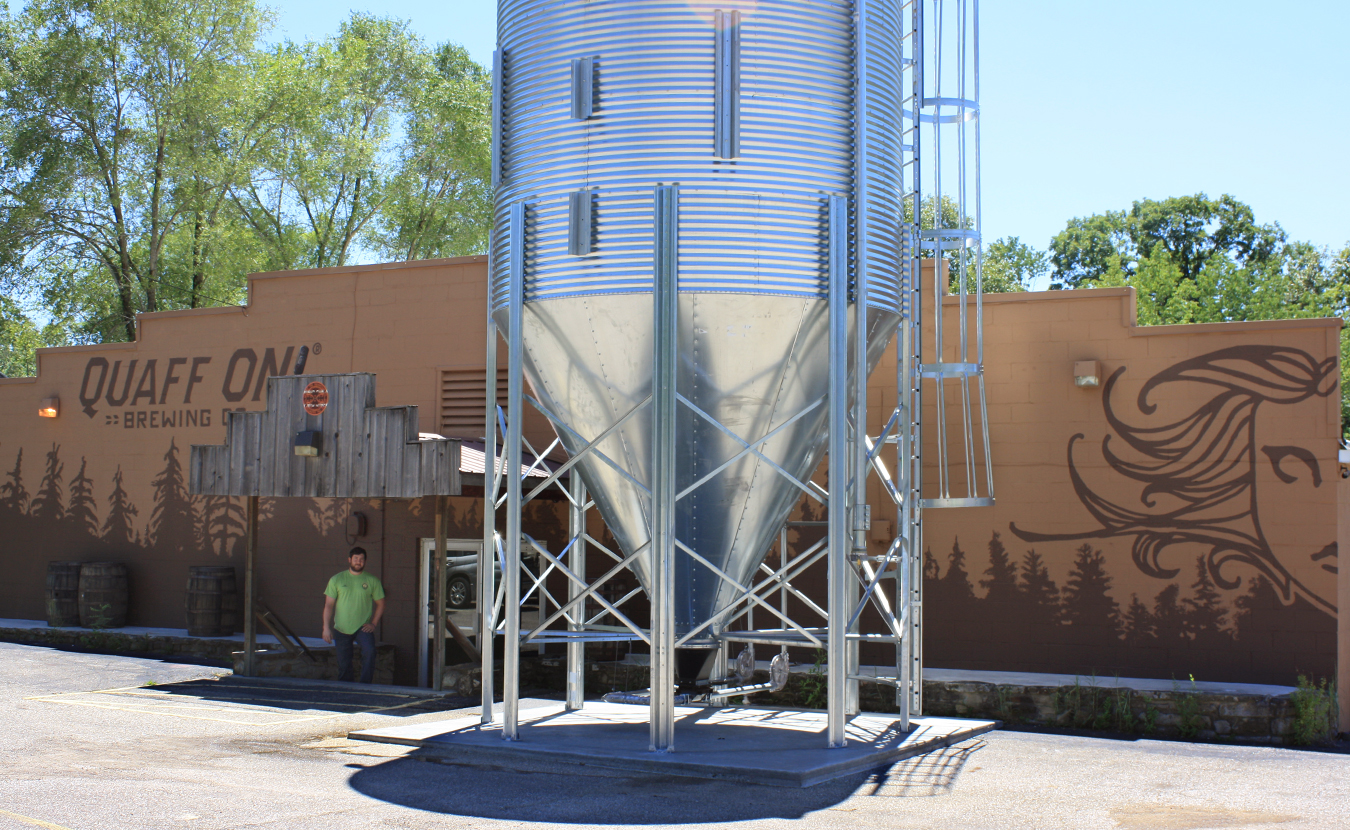 Mark Havens, head brewer of Quaff ON! Brewing Company, stands in the doorway of the Quaff ON! production site in Brown County, which is located in an old bowling alley. | Photo by Jonna Mary Yost

At a chemistry seminar early in my move to Bloomington, beer from Upland Brewing Company loosened the tongues of chemists and listeners alike. At Gallery Walk in October, Cardinal Spirits gave samples of each of their products at the massage therapy center That’s The Rub. Prior to my recent viewing of a show at the Bloomington Playwrights Project, Oliver Winery graced the foyer with a small table of their wine. Every place I show up, no matter what type of event or which location in town, brewers, distillers, and vintners are involved with the community, utilizing their product as a way to gather friends and make connections.

Community involvement has become a focal point for local businesses in Bloomington. The more events I attend, the more true I find this statement to be. My experience of that close-knit feel doesn’t stop at the county line.

In Brown County, just north of Nashville, stands a dark-brown building with the face of a goddess painted across it. As I arrive at the Quaff ON! Brewing Company production site, a rugged man waves and smiles. I walk up and meet Mark Havens, head brewer of Quaff ON!. His positive demeanor is infectious as we step through the doors and across the concrete floor, where he pours me a Hare Trigger IPA. He excuses himself to wrap up a distilling meeting. Havens and the rest of Quaff ON! are focused on community development in Nashville and Brown County. | Photo by Jonna Mary Yost

My ears perk up at the word “distilling,” but I allow him to step away for the moment, and I begin to meander through the brewing equipment to take photos.

Another man greets me as I’m in the middle of framing a shot, squatting and balanced on a couple of bags of what has to be either yeast or hops. Danny Webb, head of Quaff ON! marketing and sales, talks faster than I can keep up as he fires facts about the brewery. Most Quaff ON! beer is produced in this facility. Nashville needs breweries for community development. Quaff ON! is looking to expand the production site. We are standing in an old bowling alley. “Have you seen The Big Lebowski?” Danny asks.

I hide laughter at his shock that I have not seen the movie (but I will be sure to watch it now). Quaff ON!’s tagline, “The woods abide,” gives a nod to the movie quote, “the dude abides,” acknowledging both that significant scenes in the movie take place in a bowling alley and that, just as “the dude” remains unflappable in the movie, the woods will always be tranquil. The team at Quaff ON! is outdoors oriented and committed to Brown County’s land, so the tagline is just what they wanted.

When Big Woods Brewing Company first opened in 2009 in downtown Nashville, the people of Nashville and Brown County backed their local brewery and pub so strongly that just three years later, in 2012, the company was able to build its current production site, called Quaff ON! Brewing Company. Now only a few types of beer are brewed at Big Woods, while most Quaff ON! beers are brewed in the old bowling alley — which will stretch to be almost twice as large after the renovations are completed next summer. Once expanded, more beer will be brewed at the new location, leaving the in-town location to focus on small-batch specialty beers. From these changes, 75 jobs have been created in the past six months, and Quaff ON! projects to add 200 more employees to their roster when their next location, Big Woods Speedway, opens in the Indianapolis area next spring.

Just as Danny begins another spell of info about the coming production-site expansion, Mark steps in after finishing his meeting — bringing more beer — and leans on a stack of pallets. Since he joined Quaff ON! as part-owner in 2013, Mark has been much busier than when he began his brewing career at Oaken Barrel in 2004 in Greenwood, Indiana. Quaff ON!’s recent tie for third as the Indiana State Fair craft brewery of the year has left a sparkle in Mark’s eyes and a hunger for growth and expansion.

“But what about the distillery?” My question is overheard by a young man named Cole Smith, who heads my way. Cole tells me that the distillery is located on the top floor of Big Woods, and the first moonshine they have produced is aptly named Hard Truth Single Malt Whiskey to signify the serious nature of hootch. Cole, the head of distillery operations, isn’t looking to make anything too fancy but simply to add another dimension to Quaff ON!.

Despite my interest in moonshine, my eyes stray to a man in coveralls, hauling canisters through the building and out a side door, and I trail behind him. He tells me he owns a farm a few miles down the road and his cattle love the depleted hops left over from the brewing process, which recycles the spent brewing materials. When Quaff ON! expansions are finished next summer, the production site will be almost twice as large. | Photo by Jonna Mary Yost

My interaction with Quaff ON! affiliates continues as Michael Brooks of Waltz Family Farms strolls in. I don’t let his serious eyes or even more serious beard intimidate me. We shake hands and are soon flipping through farm photos on his phone, talking about his Cascade and Columbus hop plants, which are now two years old, and how his farm came to partner with Quaff ON! for a seasonal beer, called Aquaffalypse, which is brewed each fall. The beer is served at Quaff ON!’s Quafftoberfest, an Oktoberfest celebration that promotes local hops and other businesses in Nashville during their busy, fall tourism season.

At last it seems there are no other hands to shake. I retrace my steps across the concrete floors and the smell of hops fades as I reach the door. The flavorful precision of people, ingredients, and camaraderie at Quaff ON! results in something more than beer — a community.

Many local breweries, wineries, and distilleries have realized their potential in more than just providing a great product. And Quaff ON! is following suit. They are collaborating and constructing the exact place they want Nashville and Bloomington to be: a town focused on the people.