Sanders Is Only Presidential Candidate to Visit Bloomington Before the Primary 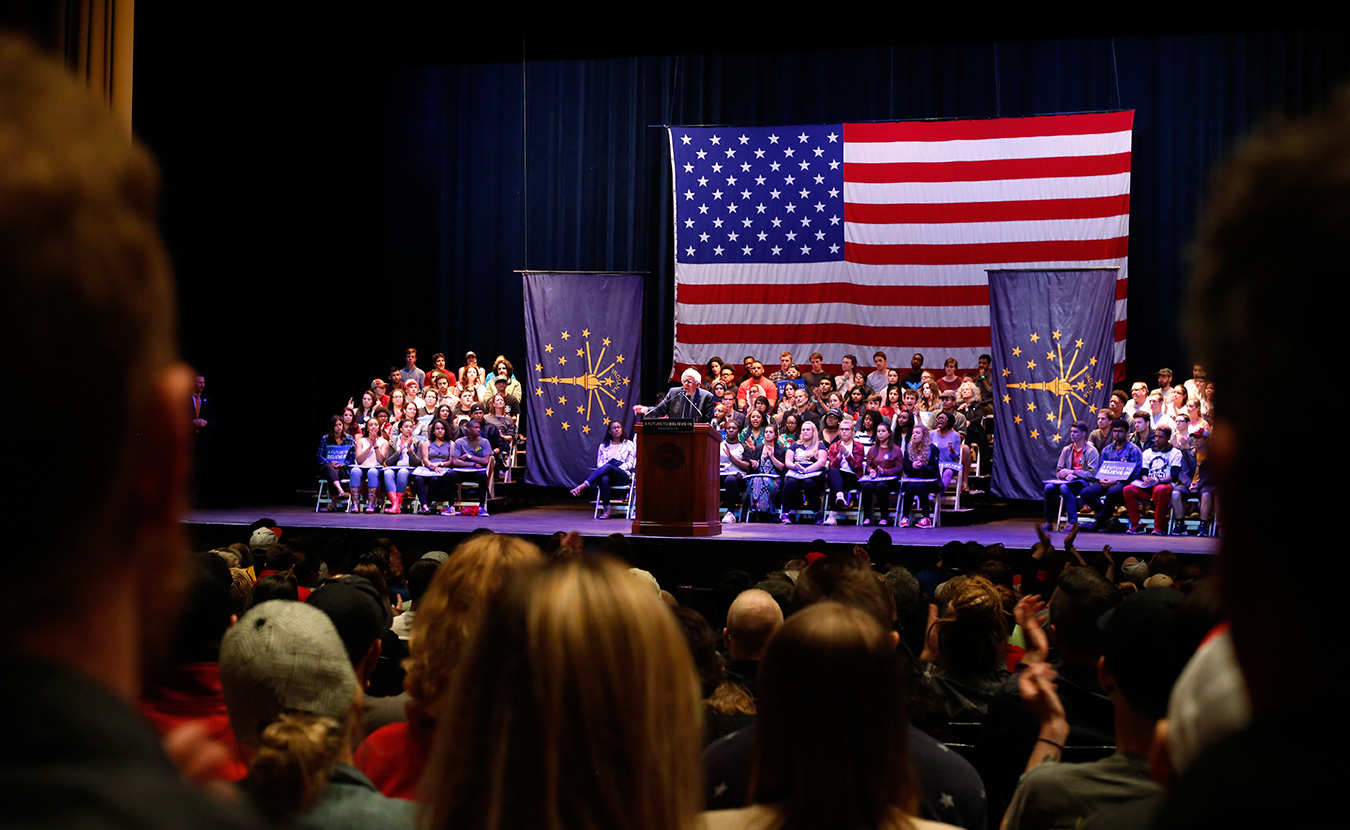 Vermont Senator Bernie Sanders has been the only presidential candidate of either party to visit Bloomington during this campaign season. An enthusiastic crowd greeted him at Indiana University Auditorium on Wednesday. | Photo by TJ Jaeger

Update May 2, 2016: Republican presidential candidate Ted Cruz is coming to Bloomington at 5:30 p.m. on May 2 at Wagon Wheel Country Market & Deli. Click here to reserve a ticket. We’ll be live streaming the event on Periscope — follow us on Facebook or Twitter for a link.

While giving an impromptu address to the thousands of supporters who weren’t able to get into the at-capacity Indiana University Auditorium, presidential candidate Bernie Sanders said he was proud to see so many young people interested in politics.

Many of those people stood outside in frigid rain for hours on Wednesday just for a chance to hear the Democratic senator from Vermont speak about income inequality, free public college, climate change, and more from his platform.

The auditorium, which can hold about 3,100 people, quickly reached capacity. This left thousands more Sanders supporters outside in the rain.

While Sanders spent Wednesday campaigning at IU and Purdue University, Hillary Clinton has been focusing on the northern half of the state this week, scheduling campaign stops in both Hammond and Mishawaka. Republican candidates Ted Cruz and Donald Trump also stopped in Indiana this week. On Tuesday, Cruz held a rally at the Hoosier Gym in Knightstown and announced Carly Fiorina as his running mate in Indianapolis on Wednesday. Also on Wednesday, Trump appeared at the Indiana State Fairgrounds with former IU basketball coach Bobby Knight.

With Sanders visiting campus one week before finals, many students chose to take a break from studying and camp out in line many hours before the auditorium doors opened at 5 p.m. When they did open, however, the lines moved slowly while Secret Service agents and out-of-town police patrolled the area. Everyone who entered the auditorium had to go through airport-style security. Umbrellas had to be left at the door. Stanley Njuguna, an IU freshman and a social media executive with IU Students for Bernie Sanders, captures the event on his phone. | Photo by TJ Jaeger

The energy inside the auditorium remained high for the two hours before Sanders took the stage. And in between crowd chants like “We don’t need a super PAC, Bernie Sanders has our back,” three guest speakers addressed the crowd. One of those speakers was Stanley Njuguna, an IU freshman who is a social media executive with IU Students for Bernie Sanders. Njuguna spoke of Sanders’ intended political revolution, highlighting much of the senator’s campaign promises.

Sanders took the stage a little after 7 p.m. and spoke for more than an hour and a half, receiving frequent standing ovations. As he talked about his campaign, he even threw in a few jabs at Clinton and Trump. In one of the crowd’s favorite lines of his speech, Sanders reassured the audience, “Don’t worry, it won’t happen,” referring to the possibility of a Trump presidency. So many people showed up to see Sanders speak, thousands had to remain outside in the rain. Sanders addressed the folks outside before and after the event. | Photo by TJ Jaeger

Attendees nodded their heads and snapped their fingers in solidarity with Sanders as he spoke. At the end of the speech, he urged the audience to go out and vote next Tuesday in Indiana’s primary, which caused another round of applause. As Sanders walked off the stage, the crowd emptied the auditorium significantly faster than it had filled it, only to be greeted by the rain once again.

Editor’s note: We streamed the Bernie Sanders rally on Periscope, which is available until 7 p.m. tonight.