Service Dogs Are a Breed Apart 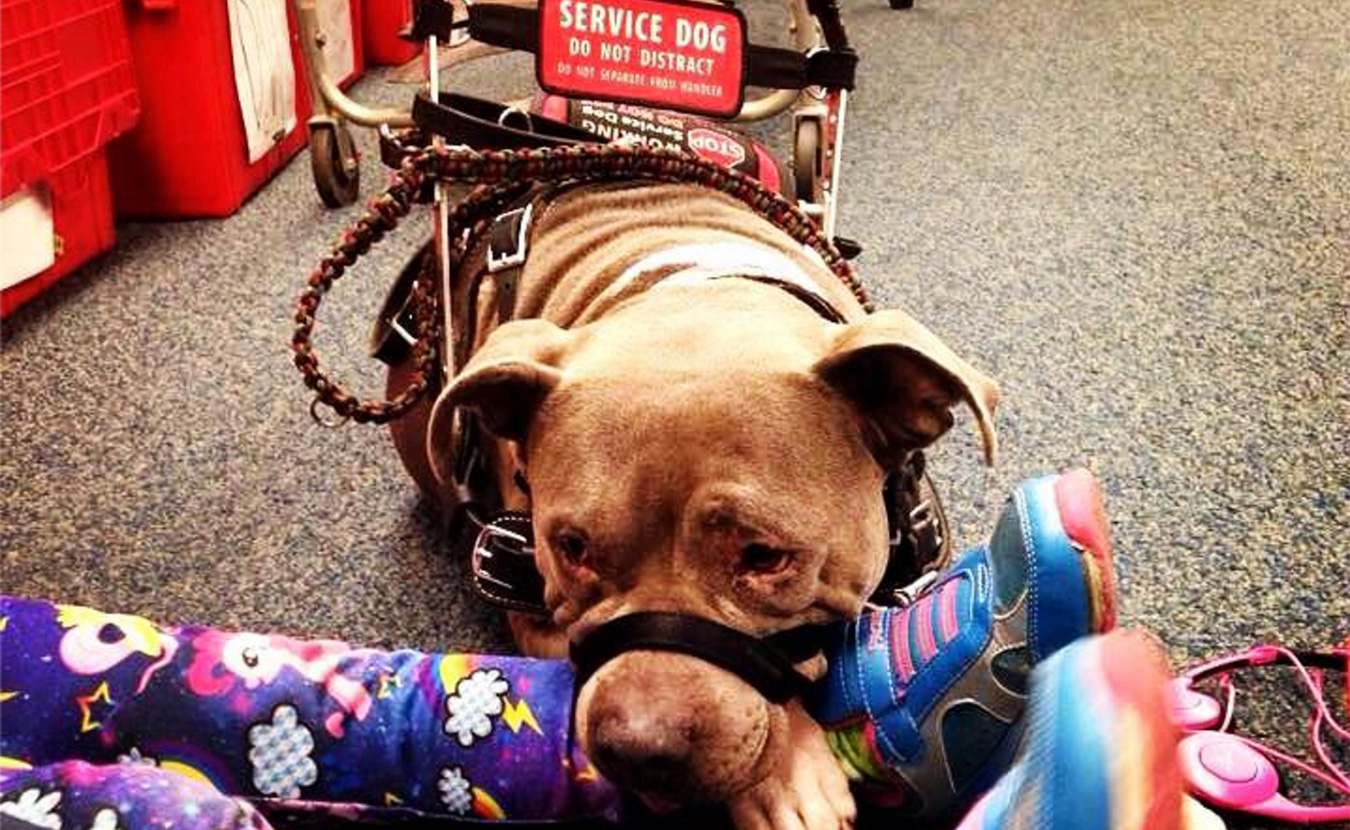 Dogs can do the most amazing things, from sniffing out bombs, drugs, and prey to fetching the newspaper and just being there for us when we need unconditional love.

But service dogs are a breed apart.

We’re used to seeing service dogs helping people who are visually impaired make their way in the world, enhancing their freedom of movement and sense of confidence. But these capable canines can also detect high or low blood-sugar levels in people with diabetes, open doors, push medic-alert buttons, use their body weight to prevent falls, and disrupt repetitive behavior in individuals with autism, among other life-saving responsibilities. “A service dog is a dog that is task-trained to mitigate the legally defined disabilities of a handler,” says Kori Marshall Peppy, a Bloomington-based service dog trainer who is also responsible for PupCake The Service Dog. However, she adds, “it is very important for people to understand that not all disabilities are visible. When you see someone walking through the grocery store, smiling and walking confidently with a service dog at their side, it may or it may not seem like the handler is in need of the dog. What many may not know is that the handler could have a seizure without warning should they not have the working dog. [The handler’s] confidence comes from knowing that her service dog will detect a seizure 30 minutes before it happens.”

Any dog can be a service dog, says Sandi Holubik, a client success manager at the Indiana Canine Assistant Network (ICAN) in Indianapolis. The key, however, is to start their training early, she says — “as young as two or three weeks old.”

“We have our own breeding program,” Holubik says. “As soon as they start moving around, we start doing all sorts of biofeedback and training on them — manipulating them, handling them, turning them upside down to see what their temperament is.”

ICAN sticks to golden retrievers, Labrador retrievers, and golden-Lab mixes in its breeding program, with the latter being the ideal, Holubik says. “That’s where we’ve found our biggest success. You get that gentle, kind, loving nature of the golden retriever, and you get that eagerness to please of the Labrador retriever. When you cross those two, you get a really good blend of both. And both seem to be very motivated by food, so when it comes to the positive training and treating for reinforcement of good behavior, both of them take to it quickly.”

The demand for service dogs is high. According to Holubik, ICAN’s average wait time is a year and a half to two years, while Peppy has heard of some people having to wait up to five years. And the cost to train a service dog can range from $15,000 to $45,000. That’s why nonprofit organizations like ICAN rely on fundraisers and volunteers to fulfill their mission.

One of the most important ICAN volunteer roles is that of “furlougher.” That’s because ICAN’s dogs are trained by inmates (or offender-handlers) at three Indiana correctional facilities. The dogs, Holubik explains, need to experience life beyond prison walls, so volunteers take them out for a few weeks to socialize and get accustomed to a wide variety of environments and stimuli. Holubik herself started out with ICAN as a volunteer furlougher. Service dogs can also help with a variety of household tasks. | Photo by Liz Kaye Photography

“The offender-handlers are the primary trainers. They teach [the dogs] all their cues, basic manners, everything [the dogs] need to know,” she says. “Then, to put that to use in the real world, we have furlough volunteers. The dogs are in the prison for six weeks, out for three weeks, and that’s the rotation until they graduate at two years old.”

As a furlougher, Holubik adds, “what I would do is go pick up one of the dogs and have it out with me everywhere I went, as if I were the individual with this disability. So they would be exposed to sporting events, concerts, church, parks, you name it. And then the next volunteer, on their next rotation, would take them to different places that I wouldn’t be able to take them to. So the dog gets exposed to as many different situations as possible.” ICAN service dogs spend two years in training before working with a handler. They are taught a variety of tasks and exposed to as many situations as possible. | Photo by Liz Kaye Photography

Peppy says that about two years of training is required for most service dogs, but no two trainers operate identically: “Each trainer has their own style in regard to the training they implement and the time frames they use. However, the end goal is usually the same for all trainers: an exceptionally trained working dog.”

ICAN, via its prison-inmate trainers, sticks to a positive-reinforcement-based training regimen.

“If a dog is doing an unwanted behavior, you ignore that behavior and redirect them to a desired behavior,” Holubik says. “Let’s say the dog went and grabbed a shoe and started chewing on it. You get their attention, give them a bone or a squeaky toy, and they become more interested in that. Eventually they realize, ‘Okay, these are the toys I’m supposed to play with, not the shoe.’”

When a client outlives his or her service dog, Holubik says he or she is put at the top of ICAN’s waiting list for a new dog. “We give our successor placements top priority because they know what kind of independence a dog can provide them.”

In the opposite (but less common) scenario, in which a service-dog client no longer needs his or her dog, or, unfortunately, passes away before the dog dies, there are a few options for the dog. It could become a therapy or emotional-support dog or transition into what’s known as a facility dog — a service dog that works in a hospital or clinical setting, serving multiple clients. Some of these service dogs work in courthouses where they comfort victims of abuse while they testify during trials. Or they’ll work in elementary schools with children with special needs who are prone to emotional outbursts.

Sometimes, if the dog is ten years or older, it will be re-homed with a friend or family member of the deceased client, and it will get to enjoy its “retirement” as a household pet.

To learn more about volunteering with ICAN, visit their website.

“A lot of our offender-handlers who have been released have landed pet-related jobs,” Holubik adds. “We’ve got a couple here [in Indianapolis] that have opened their own dog-grooming businesses, [and] the percentage of one of our handlers committing a crime after they get out is significantly lower than those who have not been part of our program.”

Training and caring for service-dog candidates, she says, provides inmates not only a job, but a purpose.

“A lot of them didn’t feel like they had any reason to get up in the morning,” Holubik says, “but these dogs have taught them a trade. The job is posted in the prison, they have to apply, they have to have a recommendation from their counselor, they go through an interview process, and they have to work as part of a group dynamic. So it’s giving them training for when they are released from prison back into the real world on how to conduct themselves in a job, how to work as a group, and how to be responsible.”