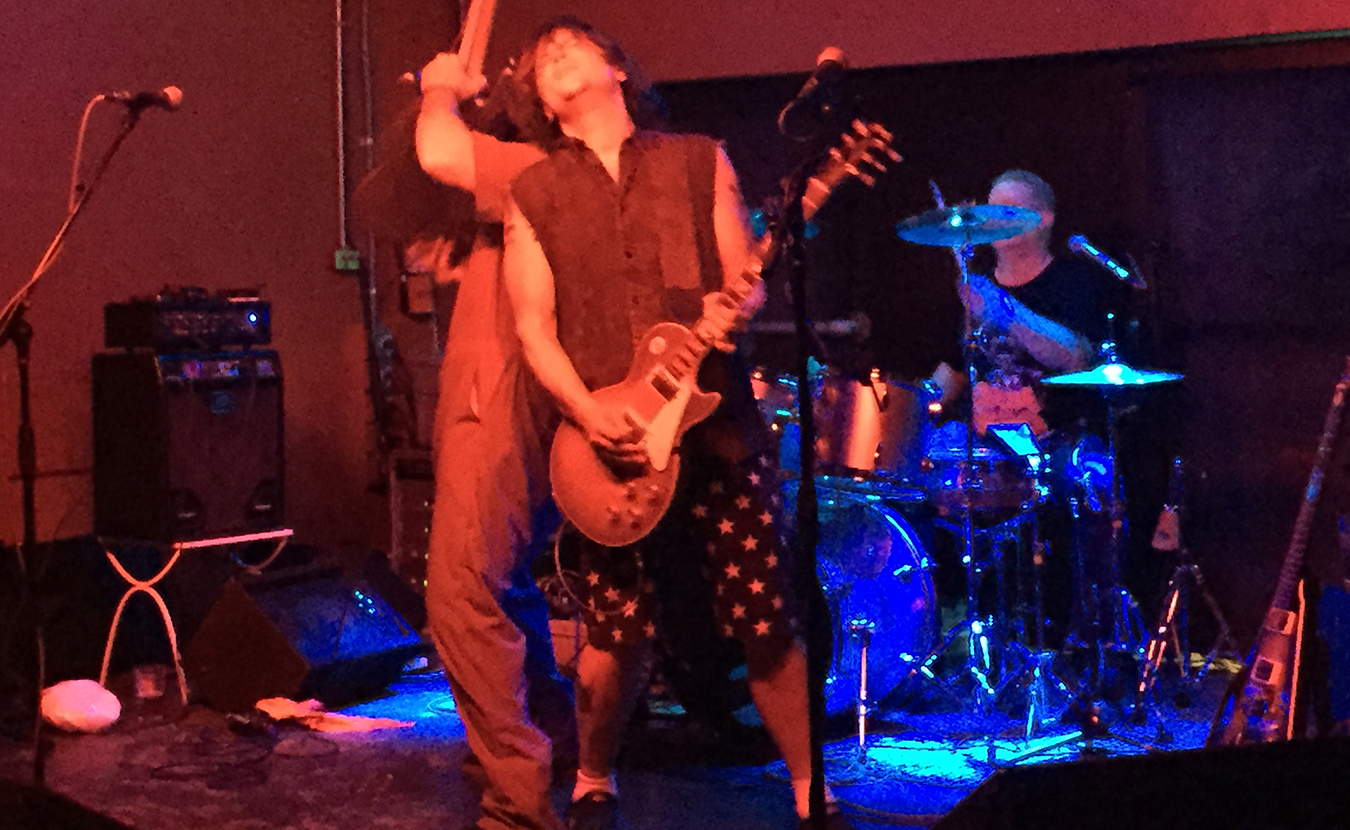 Brad Wilhelm, center, on stage at The Bishop with his band, GOUT, during their first performance. | Limestone Post

TONE: It’s something I do not have the requisite vocabulary to clearly define, but I know what it is in my bones.

The Rise and Fall of Ziggy Stardust and the Spiders from Mars is by far my favorite David Bowie album. In fact, it’d be in my all-time top 5 rock ’n’ roll albums ever made. This version of “Hang On to Yourself,” which was featured on that album, popped up on shuffle from a live recording, named Live Santa Monica ’72, from the 1972 Ziggy tour — the apex of glam rock.

It appeared on my phone as I drove home from my first live band show in maybe 15 years. Last year, in the wake of the tumult and disarray of my wife’s passing, I spent a couple of what could be politely described as “dark” months. As I emerged from the cloud that hung over me, one of the first things I decided to do was play in a real band again. I wanted to be happy again, and playing guitar in a band always made me happy.

I am not the best guitar player in the world, and that is being remarkably kind to myself. However, I have developed my own unique style of playing, and my own tone. In fact, I don’t know anyone who sounds like I do when they play (that’s probably a good thing for music aficionados).

As a kid, my guitar heroes, such as Jimmy Page, Pete Townsend, and Ace Frehley, were far beyond my technical capabilities. I made the decision early on not to try to be a better guitar player, but, instead, build my own sound. (Thank you, punk rock ethos.) I could make sounds from my guitar, and — as I grew older and began to acquire equipment — I assembled my own tone.

I use an early-1970s, 50-watt Music Man tube amp with the gain turned up and have added a double-deep Marshall 2-inch-by-12-inch speaker cabinet. I play my ’88 Cherry Sunburst Les Paul almost exclusively, augmenting it with a ’78 Gibson Tobacco Sunburst Flying V that has been outfitted with a Floyd Rose locking tremolo arm. (All of this gear has come from and is maintained by local guitar wizard Dave Baas, by the way.) I wear my guitars slung low and usually mute the medium-gauge strings with the palm of my hand slightly as I play — and I play hard and heavy. Mick Ronson in 1981 while on tour with Ian Hunter. | Photo courtesy mickeydb

I make a fearsome noise.

And it brings me joy.

We played our inaugural show at The Bishop in front of 30 or so bemused onlookers. I have no idea if they liked us, but I loved us. Being onstage with my guitar and blasting myself with that tone felt as if I were being baptized in sacred, restorative waters. I was 14 again and filled with an exuberance and giddiness I have not felt in a long, long time.

It was over too soon, and as I drove home, the live “Hang On to Yourself” came up on shuffle.

It never occurred to me before, but I played like Mick Ronson!

Mick Ronson: the mastermind behind The Spiders from Mars and guitarist for Mott the Hoople and Ian Hunter. Producer. Songwriter. And he helped a young Bloomington artist, called Johnny Cougar, put together “Jack and Diane.” (I actually got a chance to play the acoustic guitar Mick used on that record back when my band recorded at Echo Park Studios in the ’90s, but I digress.)

Okay, music lovers, before you roll your eyes, I realize I am not as technically gifted as Mick Ronson. But I play like he played live. I dove into other live Ronson tracks, and, yep, he did a lot of deep, heavy chording. He palm-muted the medium-gauge strings, playing a big, heavy Les Paul slung low.

I have his tone.

And that makes me happy.