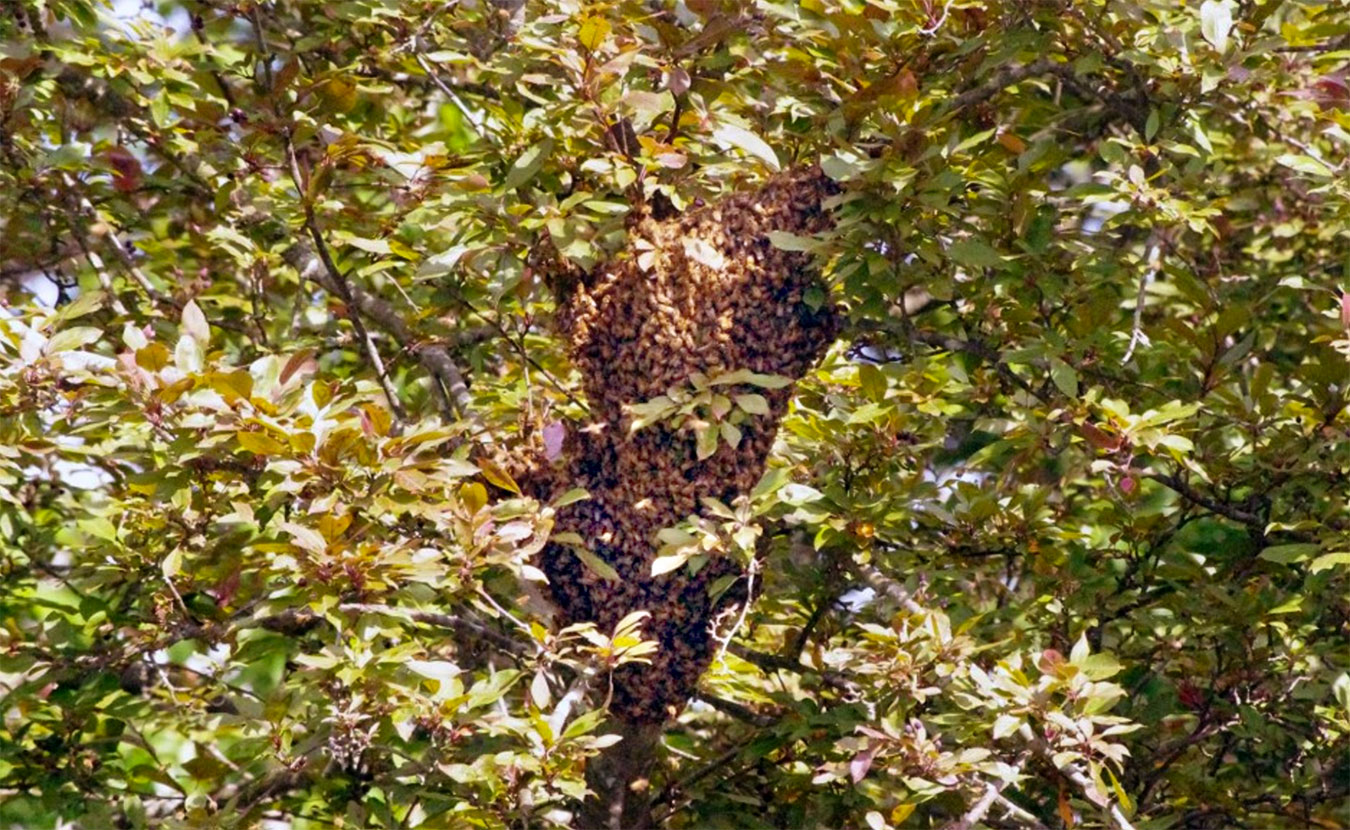 This swarm landed in a tree in Kara Krothe's backyard on a Wednesday evening in June 2016. Come Friday morning, the bees had flown off to try to find a more permanent home. | Photo courtesy of Kara Krothe and Earth Eats

This story originally aired on WFIU Public Radio’s Earth Eats in June 2016 by announcer and producer Annie Corrigan. The story has been updated.

This is swarm season, the time of year when bees reproduce and find new places to build hives.

Last year, 2016, was an especially active year for swarms in southern Indiana. While it can be stressful for homeowners who discover a cluster of bees on their property, beekeepers see it as an opportunity.

When a swarm is announced on the Bee Town Bee Club Facebook page, beekeepers race to call dibs.

Kara Krothe posted pictures of the swarm in her tree on a Thursday evening. “I thought it was pollen flying off the trees. I looked closer and realized they were honeybees,” she says. “I texted the neighbor and told her to take her kids inside because I didn’t know what was going on.”

On Friday morning, beekeeper Jill Stowers was in Krothe’s backyard looking up at the cluster of bees. After seeing the note on social media, Stowers left work in the hopes of capturing the wild bees. That means she’s not wearing any protective gear, and the paper filing box in her left hand is what she’s hoping to capture the bees in. But she’s not concerned about her safety, because swarming bees are calm. “They’re not defending a hive. They don’t have a huge honey store they’re defending. They don’t have babies and pollen. So, we’ll see how that goes.” She’s waiting on a neighbor to bring her a ladder. Her plan is to climb the ladder and shake the bees into the box.

Jill had recently done this two other times. She maintains several colonies on her hobby farm. Buying a package of bees through the mail costs her $150, so snagging these wild bees would be a money saver — if she can catch them. It’s important to collect the queen in that box or the colony will just fly away again.

And suddenly, the buzzing crescendos and the tight cluster from the tree evaporates into a haze around the backyard.

“It’s raining bees right now,” as we notice drops of yellow goo falling from the sky.

To understand why bees swarm, Hunt says you have to understand how bees reproduce. There is only one queen per hive. She gives off a special pheromone so all the drones know to not make new queen cells. In the spring, when a hive grows its numbers, sometimes the pheromone doesn’t get evenly distributed to all the worker bees and they think it’s time to make a new queen.

The workers create queen cells. The queen lays eggs. The workers feed the queen eggs royal jelly. And then poof, too many queens for one bee hive. It’s time to swarm. The old queen leaves in search of a new home, taking most of the workers with her.

Hunt says we can trace last year’s intense swarming activity to abnormally warm weather in March. “This makes the bees build up their colony strength faster, and then we had that cold weather (in April), and the bees were cooped up in their hives. As soon as the weather gets good, off they go.”

The clock starts ticking once they leave the old hive. They’ve tanked up on honey, so they need to find a new home where they can build comb and grow new bees before they run out of food. As most of the bees cluster in a tree or on a fence post, the scouts fly off to find good spots for the colony to set up shop. “These scouts come back and they do the waggle dance, the famous dance that bees do that tell each other where flowers are. Well, they also dance to tell where the new hive should be,” he says. “Once they’re all dancing for the same place, then it’s kind of a democratic decision and they all get excited and fly off.”

Hunt says swarming is a good thing for bees. It indicates they came from a healthy colony, and if all goes well, that swarm will become a new colony. They just have to make it through the winter.

Stowers and Krothe follow the swarm to the front yard.

“They’re going high up in that tree across the street it looks like,” says Stowers. “There’s no ladder tall enough.”

And just like that, the bees fade off into the distance. Stowers left empty-handed, but she has high hopes that as bees continue to swarm through June, she’ll get another chance to re-home some wild pollinators.

Earth Eats is a radio show, podcast, and website from WFIU-Bloomington about local food and sustainable agriculture.
Tagged
Comments