Will the Show Go On? Strip Club Faces a Changing City 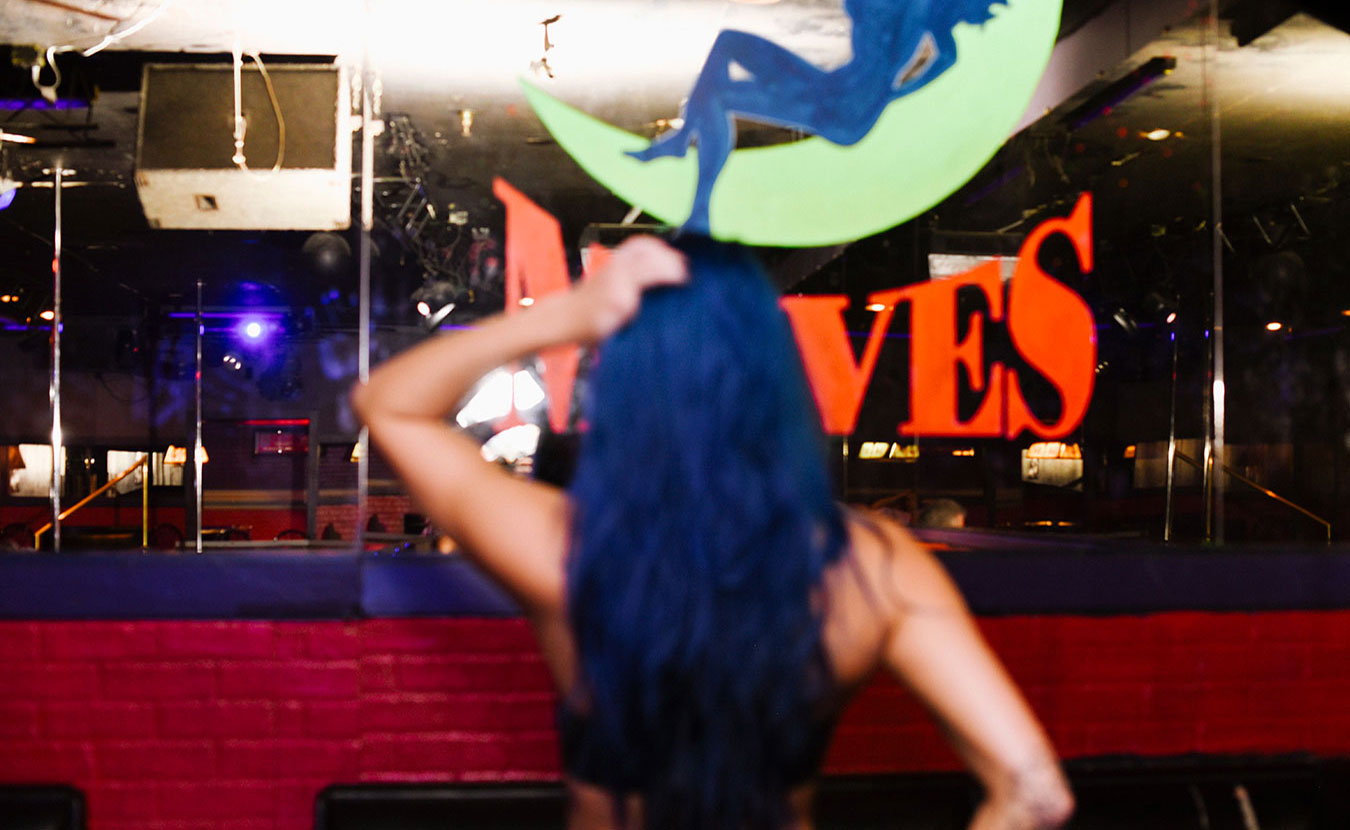 It is a Friday afternoon and Night Moves gentlemen’s club hasn’t opened yet. Madison* comes in before her shift and relaxes in a booth. She is casual and smiling, wearing leggings, and a sweatshirt, her hair wrapped up in a bun. A former biotechnology student, Madison, 23, began stripping in 2012.

Over the years, Madison has stayed at Night Moves because, although she has tried bartending and waitressing, she makes better money as a stripper. She says she used to be shy but that dancing has helped her come out of her shell and feel empowered. She knows many of the regulars and sees her customers on a spectrum — some she sees as friends, while others she avoids because they tend to be rude. Madison first came to Night Moves on a lark with friends and, after having a few drinks, wanted to audition. But the manager told her to come back when she was sober. Madison returned a week later and says that even though she was a “hot mess” trying nervously to dance for the first time, she passed the audition and was invited to work.

Known to most residents in Bloomington (its marque sits along the city’s busiest south-side thoroughfare — South Walnut Street), Night Moves is the only strip club around. Over the years, it has consistently employed and entertained a wide variety of people. This year’s holiday message reads, “Let’s be naughty and save Santa a trip.” | Limestone Post

But not all Bloomington residents support its presence. In 2012, for example, Tom Hafner, a store manager of Kittle’s Furniture, wrote a letter to the editor of The Herald-Times in which he discussed Night Moves’ sign, which often features puns and sexually themed jokes.

Hafner argued that a recent message, “Titz the Season,” was crude and inappropriate: “Doesn’t the city feel that this is offensive and crude, especially to families going into McDonald’s and students attending [Bloomington High School] South? Really? We know what your business is, do we have to have it thrown in our face every time we drive down the street?”

Hafner is hardly the first person to complain about the sign, but his letter represents how some residents feel: We know you’re there; just don’t let us see you. In a recent interview, Hafner hasn’t changed his tone. He admits he doesn’t see the appeal to such an establishment — “Why would anyone visit a place like that anyway?” To him, Night Moves represents the wrong moral message to families and residents who have to see the sign.

Switchyard Park and a changing city

These residents may get their wish. Night Moves is facing a possible move or closure due to the City of Bloomington’s plan for Switchyard Park, a new urban park between Grimes and Country Club roads. Right now, the park’s east-side entrance is planned for the old Wee Willy’s restaurant lot, which is owned by the city and sits directly next to Night Moves. In the past year, concerns began to surface that the city might force Night Moves to shut down because they did not want it to be at the entrance of a “family park.” Night Moves co-owners Rodney Domer and Byron Fine lease the building. They say the building owner has been interested in selling, but the owner would have to honor the current lease, which expires in 2020.

The city isn’t forcing any of the nearby property owners to sell, says Mick Renneisen, deputy mayor for the City of Bloomington. While it is interested in acquiring property near Switchyard Park, he says, “the city will not be using eminent domain for any of the businesses on South Walnut. … Some of the buildings in that area are already for sale.” The Herald-Times reported on December 6 that the Bloomington Redevelopment Commission is attempting to buy the Night Moves property for $725,000.

When pressed about Night Moves, Renneisen says he does not see any of the businesses on South Walnut as “good or bad,” but he does see “complementary businesses” to Switchyard Park eventually springing up in that area. He says keeping businesses and affordable housing in that part of South Walnut is a top priority for the city.

Madison is nervous about a potential closing and hopes the business can move into a more updated and nicer building. However, location is key. “I hope we don’t end up on the outskirts of town somewhere,” she says, “because it just wouldn’t work.” Owners Fine and Domer echo the sentiment, saying that if Night Moves cannot stay in a location close to the city, they might have to shut down the business.

Originally on the north side of town, Night Moves opened in 1991 and moved to South Walnut in 1992, replacing a bar named 3rd Base. Fine and Domer purchased the business in 1993, and, after a rough first year, they say business picked up and has been steady ever since.

People who work in the sex industry

Madison is earnest, friendly, and open. While there are certainly downsides to working at Night Moves, such as late hours and the stigma attached to the work, she doesn’t plan on stopping anytime soon. When asked what she wants people who criticize the business to know, she says she wants them to realize that sex workers are just normal people trying to work. “I think everyone should hang out with a stripper for a week and just see that we’re normal people — trying to afford Christmas presents and pay our bills and live a life,” she says. Dancers trying to switch careers often find it difficult to list previous work history because of the stigma of sex work. | Photo by Natasha Komoda

Sex work, even though it generates significant income, can be a volatile and unprotected industry. For this reason, organizations such as Sex Workers Outreach Project (SWOP) exist. Rosa*, a member of SWOP Bloomington, says the organization wants to build a sense of connection and solidarity among sex workers. “[We] recognize that the sex worker community is a very isolating community.” Rosa sees the attitudes by some community members who are critical of Night Moves as coming from a misunderstanding about the people who work there.

“As long as everyone is coerced into working to afford their basic needs, the adult industry will never go away,” Rosa says. “Sex work is less about personal choice, as liberals like to condemn sex workers with, and more about ‘the best option.’ … They are not ‘broke’ or ‘sad’ women — sad experiences can and do happen to anyone. They have lived experiences and should be respected, no matter what brings them there.”

This is further supported by academic research on exotic dancing. Ph.D. candidate in sociology and assistant instructor at Indiana University Eric Sevell studies and writes about the stripping industry. He points to the issue of Night Moves as one steeped in a contradiction about gentrification, perceived risk, and community perceptions. When asked about the community’s judgment toward Night Moves, he points to a common misconception: “People falsely believe that strip clubs cause all sorts of local disturbances, turn men into lechers, and are unilaterally exploitive of women.” Night Moves is facing a possible move or closure due to the City of Bloomington’s plan for Switchyard Park. | Photo by Natasha Komoda

He also points to the hypocrisy in the lack of judgment or criticism of Bloomington’s binge-drinking college culture and the inherent problem of sexual assault on campus. Night Moves keeps drink prices higher than a typical bar to try to dissuade binge drinking; they only occasionally have to deal with fights. Several downtown bars catering to college crowds offer low drink prices and often experience violence. With so much of their focus on Night Moves, critics seem to forget these establishments and students who engage in the misogynist behavior that critics claim is a problem. Sevell believes it’s problematic when critics say that stripping also creates misogyny. He sees it as an implicit suggestion that there are objectively “right” and “wrong” ways for women to behave and express their sexuality, which further suggests that only “some” women are deserving of rights and protections.

Stripping is one of the few industries where women systematically make more money than men working the same job, Sevell says. If women in the industry had better pathways to management positions and business ownership, they, and the industry as a whole, would benefit. Sevell believes critics should focus on the broader issue of gender inequality and not cherry-pick issues that are convenient for their claims. He argues that strip clubs and college bars do not create misogyny or gender inequality, they merely reflect them.

What the future holds

Night Moves employs between 50 and 60 people, depending on how busy the week will be and the time of year. If it does close, many of the dancers would lose their jobs, and the closest club where they could work is in Indianapolis — not a viable option for some women, due to childcare and transportation issues.

The average exotic dancer salary in the U.S. is $47,611, with flexible hours and no special educational requirements. The salary for a full-time job earning minimum wage in Indiana is $15,080. Given this economic reality, many women employed in sex work tend to stay for extended periods of time. Some dancers at Night Moves have worked there for 10 to 15 years. Should dancers try to switch careers, it is difficult to list previous work history because of the stigma of sex work. Madison, who has been working at Night Moves for four years, has a second job in Bloomington, but she keeps her Night Moves job a secret from them and her family members.

As the city becomes more gentrified, its development plans ultimately cost the populations that are vulnerable. With stigma-attached occupations such as exotic dancing, city planning will push sex workers to be further marginalized. But this doesn’t need to happen. Should Night Moves decide to re-open in a different location, Bloomington can include this business as a part of its array of services, funky businesses, inclusive attitude, and cultural ethos. The sex industry, after all, is an industry that is responding to a demand, not creating one.

*Names have been changed

Paulina Guerrero moved to Bloomington in 2011 to go to graduate school for folklore. She hails from Washington, D.C., and is still an East Coaster at heart. She has a secret past life crashing on NYC couches and creating raucous street theater. Although she misses being close to the ocean, she is quietly becoming more infatuated with the Midwest day by day.
Natasha Komoda

No Replies to "Will the Show Go On? Strip Club Faces a Changing City"