Food Insecurity, Part 2: Seniors and Children Are the Most Vulnerable

This is part 2 of a three-part series by Sarah Gordon on food insecurity — the inability to afford nutritious, or even enough, food. In part 1, Gordon introduces the popular misconceptions about food insecurity. Local experts say the problem is more systemic than most people are aware. 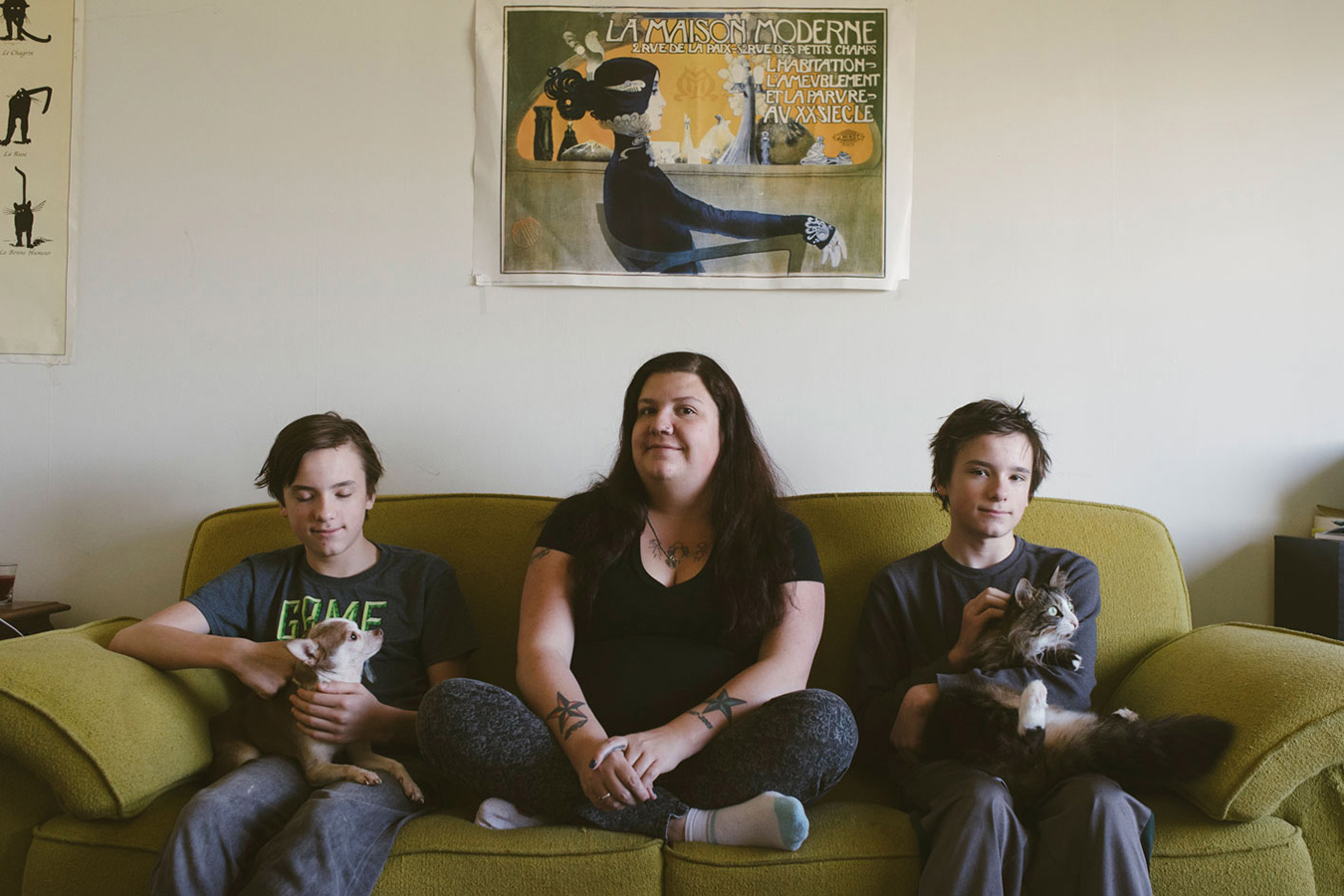 Laura Martinez sits with their twin sons, Korbyn (left) and Jarek, and their dog, Sancho, and cat, Gizzy. Martinez has dealt with food insecurity on and off throughout their life and has worked very hard to protect their sons from the stress of being food insecure. | Photo by Natasha Komoda

In 2014, 46.5 million Americans — that’s one in seven — used the services of the Feeding America network, a membership organization to which most major food banks in the United States belong.

Sixty-five percent of the households that used Feeding America services included at least one child, at least one senior, or both.

“Really, the largest portion of the people that we see in our dining room here are seniors,” says Vicki Pierce, executive director of Community Kitchen of Monroe County.

As the baby boomers enter retirement, the population of the United States as a whole is aging, so it makes sense that the number of seniors needing food assistance would also grow. But according to Kerry Conway, executive director of the Area 10 Agency on Aging, the percentage of seniors who are food insecure is growing faster than the number of seniors overall.

“Our population is aging. It’s not the meal in the belly of the snake that we thought it would be. It’s a permanent demographic shift,” says Conway, referring to a study funded by the National Foundation to End Senior Hunger. “A piece of it is just, indeed, that we are growing older, but in this study they say that in addition to the fact that we’re growing older, the problem within the elder population [of food insecurity] is also growing larger.”

To pin down any one reason why growing numbers of elders are food insecure would be impossible — a number of factors converge to make it happen. Social isolation and poor health factor prominently, as well as the depression that can often accompany loneliness. Most important, though, is simply that many seniors don’t have enough income to pay the bills. Many food-insecure seniors worked jobs that provided a livable income during their working years but didn’t pay enough for retirement. And this is the first generation in modern history wherein the majority of retirees do not receive a pension.

“The baby boomers are the first generation that did not have, in general, a structured retirement plan,” Conway explains. “Half of our seniors are trying to live on $13,000 per year or less of Social Security. And that, right there, is food insecure.”

Area 10 collaborates with Community Kitchen and various other groups, especially churches, to provide free groceries and meals to seniors in need, but they struggle to keep up with the demand.

“Elder food insecurity is made even more complex by the fact that once seniors reach a financial state where they can’t afford enough to eat, there’s not much they can do to dig themselves out of the hole,” says Pierce.

Children, too, have limited ability to improve their own access to food, and they experience food insecurity at a rate higher than any other subset of the population. The reasons for this are, most likely, far simpler than the reasons for senior food insecurity: “If you’re struggling and you have kids, you’re going to be struggling exponentially more,” says Pierce. “Sometimes kids outnumber adults in a house. And kids need more food.” 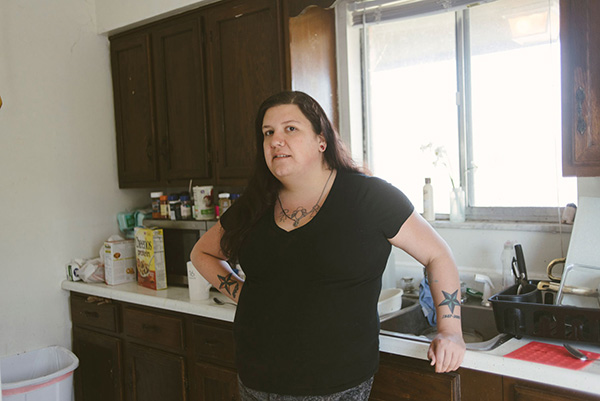 Martinez was 19 years old when their sons were born. They say they have worked hard to protect their sons from the stress of being food insecure. | Photo by Natasha Komoda

Laura Martinez has struggled with food insecurity on and off throughout their life, and by extension, their twin sons have as well. Martinez worked hard to make sure they never knew it, though. Martinez was 19 years old and a student at Indiana University when their sons were born. They say they didn’t have much support — financial or emotional — from their parents. While they were pregnant, and for several months afterward, they lived at a crisis pregnancy home. But after they moved out, things became harder.

“I’d say the first time that it was really bad was when they were toddlers,” Martinez says. “I had, at that point, left IU, and was still living here in town. I was working at Arby’s, making whatever the minimum wage was at the time — like six or seven dollars [per hour], but not enough to afford an apartment in Bloomington and take care of my boys. So there were times that were really, really bad. Since then, here and there, I’ve had better jobs and worse jobs, so it would kind of fluctuate throughout their childhood.”

Martinez’s determination to protect their children from knowing about their financial struggles grew from their own childhood experiences. “Growing up, especially — I think I carried that with me as an adult — the feeling of having been very stigmatized for being poor and being in a situation where we didn’t know where dinner was going to be coming from,” Martinez explains. “So as an adult, with my own children, I really tried to keep that from them because I didn’t want them to feel the same way I felt about it when I was growing up.” When they were in high school in Brown County, their parents would bring home dinners from the soup kitchen almost every night. “And I was really embarrassed by it,” Martinez says. “I was grateful that we lived in the country. In the summer, our house wasn’t air conditioned and it’d be really hot so we’d sit outside on the porch and eat, and I was grateful that my friend wasn’t going to walk by and see us eating out of these containers every night.”

The twins are teenagers now. Martinez re-enrolled at IU when they were 27 and went on to complete both their undergraduate and master’s degrees in history. They have a job that they like, and they earn enough that they rarely, if ever, needs to worry about having enough food in the house anymore.

For a family with children like Martinez’s, though, the most challenging times were often when they earned barely too much to qualify for government support. “At one point, my kids got cut off of their Hoosier Healthwise [Indiana’s state health insurance program for low-income children], because I guess I had made enough overtime in that period of time that when they looked at my paychecks, they cut them off. So I had to cover them under my work insurance, which was obscenely expensive, so I made less per paycheck than I had when I was making less money.” 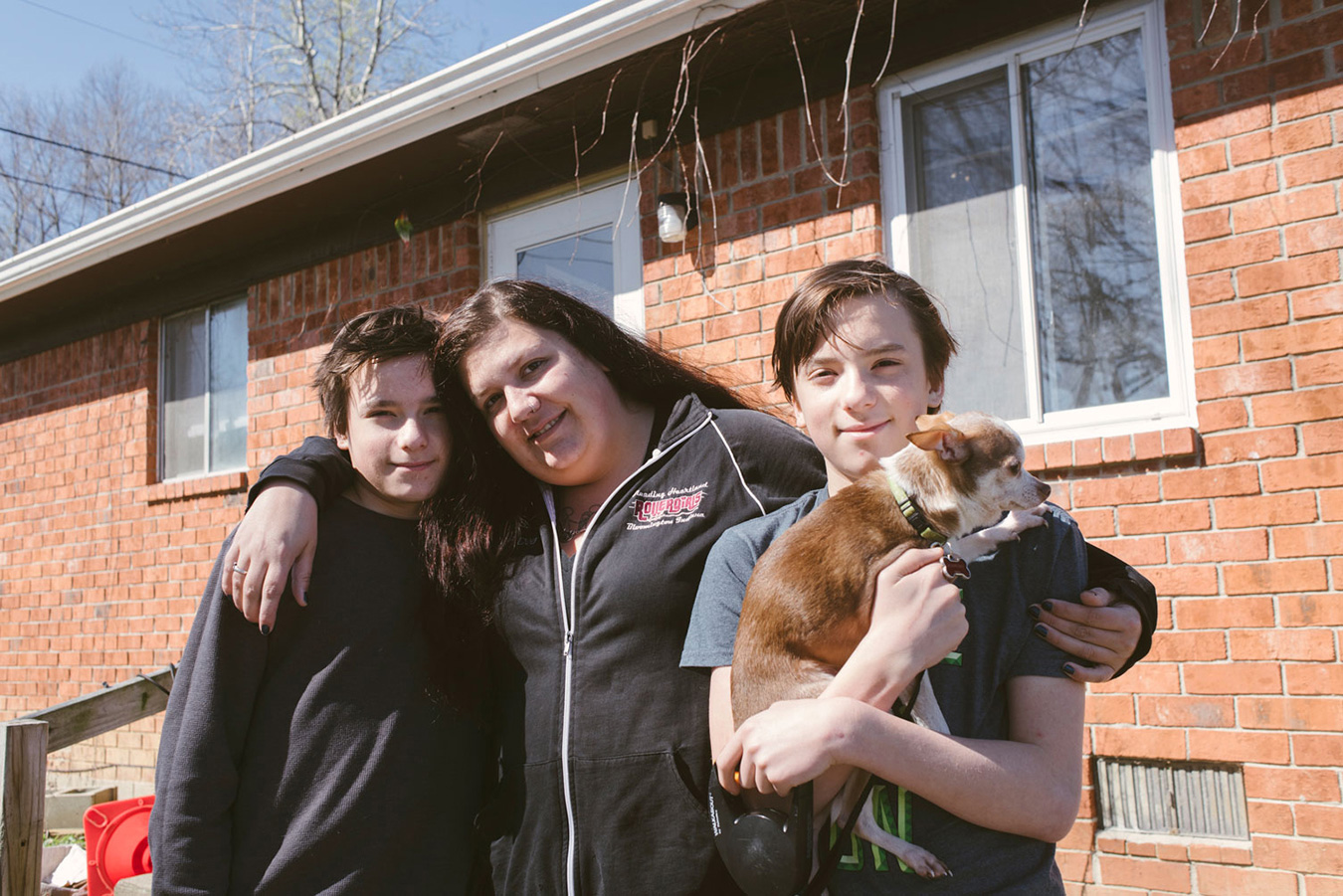 Martinez says when their twins were younger, there were nights where Martinez had to pass on dinner in order to have enough food for their kids. | Photo by Natasha Komoda

The cycle of food-insecure children growing up and becoming food-insecure adults is a difficult one to break. The cycle of poverty plays into it, but so do the short- and long-term problems caused by malnutrition. Community Kitchen targets food-insecure children in their outreach programming through programs like Backpack Buddies, which sends kids home from school with bags of groceries for the weekend, and by providing free lunches to children in low-income neighborhoods during the summers when they can’t get lunch at school.

“Hopefully, then, if they’re having issues in school, they’re not nutritionally based,” Pierce explains. “Hopefully, they get the calories and nutrition they need to grow and develop and run and do all those physical play-learning things when they’re really young, and to be able to focus in school when they get a little older, and be able to do well, so they can go to college or get a trade job. And [that] it’s something that can sustain them and their families and not put them in a constant state of food insecurity.”

Sarah Gordon is working on part 3, which focuses on food insecurity among college students. Subscribe here for free to get email notifications when new stories are published. In addition to Community Kitchen of Monroe County, Area 10 Agency on Aging, and other nonprofits working to address the problem of food insecurity in our community, local businesses also have programs to help. For example, we just found out that Falafels Middle Eastern Grill is developing a program that offers Pay-It-Forward sandwiches for those who are food insecure. People can buy a sandwich voucher in person at the restaurant, which gets put on a board near the cashier (see photo). Folks who need a sandwich, but can’t afford it, can take that voucher and receive a meal. And soon, there will be an online cart where anybody can purchase a Pay-It-Forward voucher remotely.

We’d love to hear what other local businesses are doing to make a positive change!